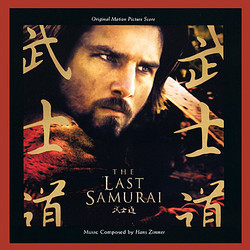 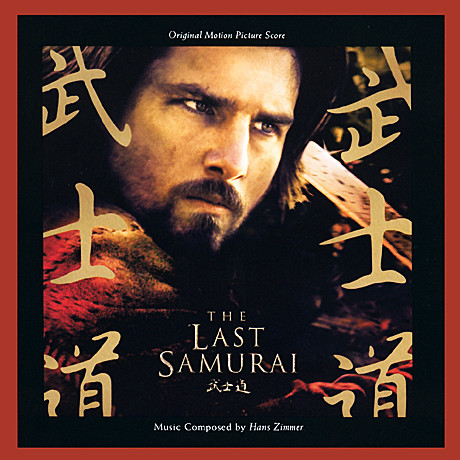 Show reviews in other languages
The Last Samurai - 07/10 - Review of Tom Daish, submitted at 2010-09-07 22:34:52
Who'd have thought the last Samurai was Tom Cruise? I know, it's a surprise to me as well. The Last Samurai is a film with ambiguous historical credentials, indeed one review described it as an 'historical fantasy' suggesting an entirely imaginary story set in a semi-realistic backdrop. Whatever the case, it takes its lead from Dances with Wolves featuring an American who goes native and learns the way of the Samurai before their ultimate destruction. A metaphor for the white man bringing down foreign cultures? Who can say. In any event, Edward Zwick's epic did pretty well, especially for a film that contains fairly lengthy scenes with little dialogue and then much of what there is in Japanese anyway. Although previous Zwick collaborator James Horner might have seemed a good choice, this fairly plum assignment ended up at the door of Hans Zimmer.
A careful look at the credits is always a good move on a Zimmer score given his preponderance for roping in Media Venture colleagues to help out, but in this case the only credit seems to be for 'Additional Arrangements and Programming' by Messrs Geoff Zanelli, Blake Neely (also conducting) and Clever Trevor Morris. Nice how that scans there. As per usual, the album is sequenced with a few fairly substantial tracks, particularly at the beginning and the end. A Way of Life introduces what is ostensibly the main theme which is a long lined, elegiac melody that is nice enough, but doesn't quite capture either the location, period or nobility of the film's characters. Not entirely characterless, but a few more pentatonic scales might have given it a stronger flavour. However, this rather basic opening is built upon fairly effectively.

The film contains a number of battles, but Spectres in the Fog covers Cruise's first encounter with the Samurai (initially fighting for the other side) and, perhaps as expected, Zimmer breaks out the Taiko drums which bang along dramatically. According to the press notes, the composer manipulated 10,000 Taiko drum samples and then picked 'the best ones by their emotional resonance.' Erm, OK Hans. Whatever the convoluted route to their appearance in the score, they are undoubtedly effective and of course, make a nice gesture to the location. However, the action highlight is Red Warrior with chanting chorus, more booming percussion, racing string figures and, perhaps becoming something of a Zimmer cliché, this is all set against a broad melody in the horns. However, the swirling background materials drive the music hard toward an abrupt conclusion before a quieter interlude leads into more action during The Way of the Sword.

About the only point where the music picks up without action is the martial finale to Idyll's End, although at times it comes a little close to Crimson Tide. Despite numerous fine moments, I am somewhat undecided about The Last Samurai. It's a rare event that I see the film before hearing the album, but just the case here and for my money, the score didn't leave much of an impression after seeing the film. Zimmer's extended, low key melodies coming close to aural wallpaper on occasion, but they are undeniably well suited wallpaper and the action pumps up nicely when necessary. It doesn't reach the dramatic peaks of The Thin Red Line or the variety of Gladiator. Some of the low key tracks threaten to drag a touch, but there is enough variety to sustain the running time and the athletic bursts of action are undeniably exciting. Good, but not quite top drawer Zimmer.
The Last Samurai - 08/10 - Review of Andreas Lindahl, submitted at 2008-01-20 21:25:40
Hans Zimmer once described The Last Samurai as "Gladiator in Japan". I don't know whether he was refering to the score or the movie, but the composer's music for Ed Zwick's epic, starring Tom Cruise, doesn't have that much in common with Zimmer's successful Academy Award nominated score. Well, perhaps in scope, but certainly not when it comes to sound.

The Last Samurai mixes Zimmer's scores for The Thin Red Line and Beyond Rangoon - two very fine scores and the result is excellent. Like The Thin Red Line, perhaps the best score in the composer's career, The Last Samurai is filled with slow strings and long melodic lines. And just like Beyond Rangoon, The Last Samurai has strong roots in Oriental harmonies and tonalities, with electronic influences. Zimmer makes use of a large battery of Taiko drums in a couple of cues, and the sound is astounding and quite powerful, while bringing forward more intimate solo instruments such as cello and violin in other parts of the score and also adding some ethnic flavor with the help of ethnic woodwinds and the shakuhachi throughout the entire score.

The Last Samurai is a very relaxing and soothing score, just like its two relatives, The Thin Red Line and Beyond Rangoon and at times reminds me of parts of Vangeli's Voices album - especially the beautiful violin solos. But the music is also allowed to take a much darker and more dramatic path in a couple of cues. The excellent "Red Warrior" features a chanting male choir, supported by anvil, brass and strings. Very good and this is one of the few moments where the score actually resembles Zimmer's music for Gladiator, with some typical Media Ventures action music.

The main theme is a beauty, of course, since Zimmer is an excellent tunes smith. It's your typical Zimmer melody - very sad, proud and memorable - and is often performed by slow strings, ethnic woodwinds or flutes, but is occasionally given more powerful and brassy renditions, sometimes resembling the "Journey to the Line" track from The Thin Red Line, with the same repetition of string ostinatos, building towards powerful climaxes, such as in the latter half of the opening "A Way of Life".

Fans of Zimmer's The Thin Red Line and Beyond Rangoon should really pick up this score. All in all, Hans Zimmer's The Last Samurai is a winner and one of the best scores of 2003.
Golden Globes: Best Original Score (Nominee)