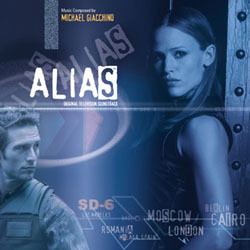 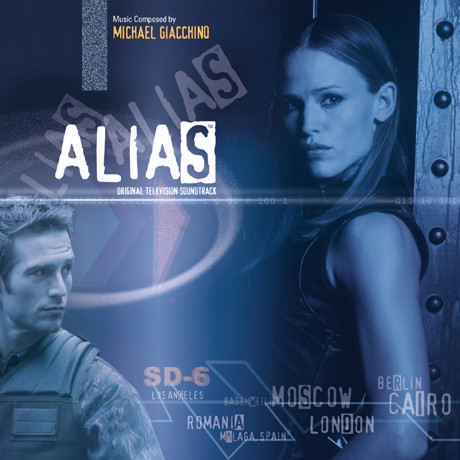 Alias Season 1 - 07/10 - Review of Oscar Flores, submitted at 2008-06-25 06:57:15
I still remember how exciting it was to play Medal of Honor for Playstation back in the late 90’s. More importantly, I remember how much I enjoyed the music from this game, telling others that whoever had composed the music was going to become a top Hollywood composer in the next decade. Well, the composer for that video game was Michael Giacchino, and my prediction of his future success was right. After Medal of Honor and other projects, Giacchino gained notoriety in the Hollywood community, quickly becoming one of the top film and TV composers. Some of his most notable movie credits include, The Incredibles, Speed Racer, and Mission Impossible III. Nonetheless, before he worked on all of these blockbuster films, he was the composer for the hit TV show “Alias.” From 2001 too 2006, this show was immensely popular worldwide. J.J. Abrams, the producer, decided to compose the main title theme for his show; Giacchino took responsibility for all other score assignments. Thus, the extremely short main title theme is a simplistic blend of electronic sounds, rhythms, and a sole string line that has little impact on the rest of Giacchino’s score.

Giacchino’s first track, “Dissolved,” sets the stage for what will become 60% of the content of this soundtrack: electronic sounds & rhythms, mixed with the brass and string sections of the orchestra, plus some additional instruments used in accordance with the scene scored. Interestingly, in this track, the listener will get glimpses of brass parts that will become incredibly important in Giacchino’s future score for The Incredibles. More importantly, much of the chord progressions will remind people of James Bond scores — particularly those of David Arnold.

“Spanish Heist” attempts to emulate the Flamenco style found in Spanish music, having constant guitar strumming, female vocals, and minor chord progressions. However, the constant filtered electronic sounds and pounding rhythms prevent the track from ever achieving a true Spanish sound. That is not to say that this cue is not entertaining.

There are eleven tracks, including “Double Life,” “In the Garden,” “Looking for a Man,” “Home movies,” “Page 47,” among others, that offer the listener a break from the constant electronic rhythms, thereby relying mostly on orchestral instruments/samples. Nevertheless, the orchestrations are mediocre and rarely evolve beyond a high-sustained note accompanied by the usual string and brass parts — with some timpani used sparingly. “Looking for a Man” is clearly influenced by some of Henry Manfredini’s string lines used in the Friday the 13th series. While on screen these melodies could evoke some emotions from the viewers, without the visual reference these tracks are incredibly monotonous in the soundtrack. Admittedly, “The End?” has a more interesting musical structure; hence making it the most enjoyable out of all those eleven tracks.

“Sleeping Beauty,” “Blow’d Up,” “Oh my god,” and “Bristow and Bristow” are, by far, the most entertaining tracks on this soundtrack. “Bristow and Bristow,” in particular, offers an incredible listening experience filled with action-packed music. This track also offers a brief taste of some fascinating brass parts that Giacchino would later use in future scores. We can also hear some recognizable motifs used by Giacchino in the Medal of Honor series. Again, many of the guitar progressions used in these tracks will remind the listener of the old and new James Bond scores.

Overall, the soundtrack is extremely inconsistent, having all sorts of musical styles with no real motif — or even instrumentation — holding the tracks together. Furthermore, many of the tracks are edited very poorly, thereby making even the music within a single track incoherent. Understandably, the TV series always had different settings, which required various styles of music. Still, by extracting some of the tracks on this soundtrack, one could easily keep a rave going for 30 minutes or so, while extracting others could serve as an underscore for a Lifetime Channel original movie. Now, having said that, there are plenty of enjoyable tracks with great combinations of electronic and orchestral elements, and more importantly, with hints of Michael Giacchino’s amazing potential as a TV and film composer.
Alias Season 1 - 06/10 - Review of Tom Daish, submitted at 2010-09-11 09:28:30
Even if it wasn't due to his working relationship with producer/director JJ Abrams, listening to Michael Giacchino's music for the TV show Alias, it is apparent that he is ideally suited to a Mission: Impossible film, not to mention Bond. I suspect David Arnold will get the Bond gig for as long as he wants it, but if it were up to me, I'd be torn between Giacchino, John Powell and Edward Shearmur. Enough idle speculation. Alias is a kind of Bondian spy thriller, albeit with a female lead and with certain emphasis on double agents and double identities. As is his wont, JJ Abrams provides the theme tune, although one can't help but feel that Giacchino could have written something considerably better than his non-descript synthetic doodle.
Unlike the opening titles, Giacchino's underscore has a lot more going for it, although those hoping for a continuation of his big orchestral style from his video game scores or The Incredibles might be mildly disappointed. This is distinctly modern, somewhat dominated by synth percussion (at least it's fairly omnipresent to propel the action along), but with enough flourishes to give it some personality. Being a globe trotting series (even if it's probably all filmed on the same few square miles of LA back lot) there are some nods to these locations, notably early on in Spanish Heist which injects a bit of flamenco flair into what otherwise might have been a rather mundane action cue. Although the percussion feels virtually omnipresent, Giacchino breaks out some Bondian brass riffs from time to time, giving the whole thing a bit more style. It's this kind of touch which puts Alias way ahead of similar scores; Steve Jablonsky's risible effort for The Island.

The series only leaves a fairly sparse moments for reflection, but these are similarly tackled with some distinction. A descending four note motif (sounding perilously close to the opening of Alexander Courage's original Star Trek theme) appears from time to time and is put through some impressive permutations, most effectively in the unpromisingly titled Page 47 where eerie chorus (seemingly live) build it into something chilling. There are perhaps a few too many action tracks built around the percussion for the album to be as fully satisfying as his video game scores or even his more recent Lost music. However, there is still plenty of interest throughout and it is the quieter passages where Giacchino's skill really shines. A fine example of modern television scoring.