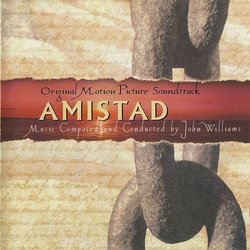 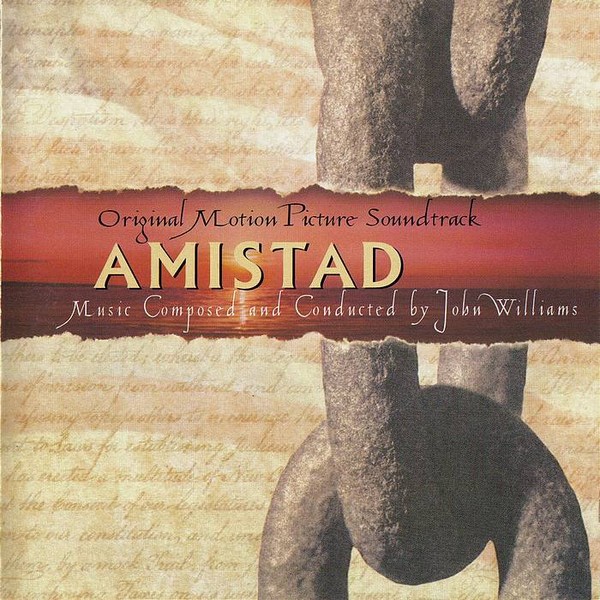 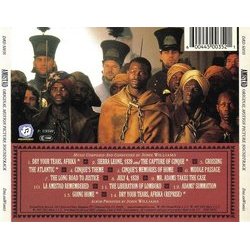 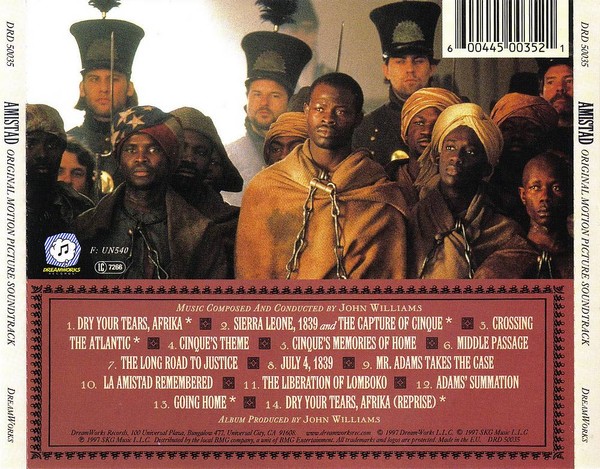 Show reviews in other languages
Amistad - 08/10 - Review of Tom Daish, submitted at 2010-10-02 12:14:54
The latest offering from Messrs Spielberg and Williams will not likely rank as the best, at least score wise. Critical reaction to Williams' score to The Lost World was mixed at best, although the film and music failed to live up to expectations. Amistad is a much more mature film and hence has a much more grown up score. It gets off to a flying start with the fantastic anthem, Dry Your Tears, Afrika, which mixes some ethnic percussion with John Williams trumpet and horn fanfares as well as a moderately sized choir. Williams mixes the American orchestra with the African vocals extremely well. I wonder if it was meant to represent the mixing of the two cultures in the film. If so, I feel he achieved it much more subtly than Goldsmith's mixing of African, Irish and English in his score for The Ghost and the Darkness. Following are two tracks that are somewhat reminiscent of the more jungle orientated music of The Lost World, although in this case, much more subdued, but equally thrilling. It mixes in some low African vocals that actually recall the Monks from Seven Years in Tibet. Cinque's Theme is a nice, if somewhat unmemorable melody that is difficult to make out when it occurs at other times in the score.

The second half of the score almost totally eschews the African elements in favour of Copland-esque Americana, with solo trumpets and the like. This turn is represented best at the beginning of The Long Road to Justice where the new tone is boldly stated. The tone is also much more upbeat. It stays upbeat for much of the rest of the score, although July 4, 1839 returns to the much more sombre style of the first half. Strangely, this contains a brief string motif that appeared in Seven Years in Tibet, which for a Williams score is an odd occurrence. Mr Adams Takes the Case reintroduces the Americana with trumpet solos that occasionally hint at Horner's Apollo 13 score, which is most unusual. This is quite a long track that presumably underscores a great deal of dialogue and so it loses its way a little at times. The Liberation of Lomboko provides the only other full rendition of Dry Your Tears, Afrika other than the first and last tracks. This is somewhat less percussive, but a very lively and thrilling arrangement and is a good way to lift the spirits after a short return to the sadder music in La Amistad Remembered. Rounding off the CD is another rendition of Dry Your Tears, Afrika that doesn't include the solo female vocal at the start as the opening track does, but otherwise is the same piece. I think the inherent problem of the type of film is perhaps the biggest drawback to this score. Long dialogue sequences are tough to score as they can't be too aimless (which, thankfully, is generally avoided here), but they don't want to drown out what is probably a very fine performance from Anthony Hopkins or whoever. As this is John Williams, he manages to keep the ball rolling quite nicely and while some listeners may find it drags a little I find it a quite refreshing diversification for Williams from his more blockbusting style.
Recorded and mixed at Sony Pictures Scoring Stage, Culver City, CA.
Mastered at A&M Mastering Studios, Hollywood, CA.
The poem 'Dry Your Tears, Afrika' © 1967 Bernard Dadie, from the book 'West African Verse'.
Oscars: Best Original Score (Nominee)