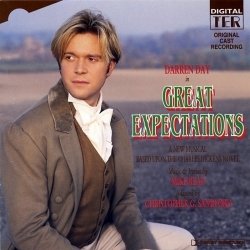 Darren Day found initial attention appearing with Bob Monkhouse on Opportunity Knocks, before, after five years with a career that spanned being a Butlins redcoat, doing stand-up comedy, and singing with bands, Day made his breakthrough as a singer and dancer in London's West End theatre, starring in Joseph and the Amazing Technicolor Dreamcoat. He then developed his career as a television presenter on programmes such asYou Bet!, and Don't Try This at Home! He also appeared in the first series of the reality television show I'm a Celebrity... Get Me Out of Here! He finished third. Since then Darren has appeared in many touring stage musicals, including Summer Holiday, Grease, The Rocky Horror Show, and Hellbreeder.


Great Expectations The Musical continued the creative partnership between Mike Read (music/lyrics), previously better known as a Radio One DJ and later TV presenter (Saturday Superstore / Pop Quiz), and Christopher G Sandford (Adaptation). Their previous work had included Read’s musical ‘Oscar’ about Oscar Wilde and ‘A Christmas Carol’, another Dickens adaptation. The musical debuted at Theatr Clwd, Mold, in Wales, before touring and received great acclaim, both for the writing and it’s young star Darren Day.

Great Expectations is a curio for collector’s of musical theatre, shows another side of the well known Mike Read’s talents and is an early example of Darren Day’s great potential as a show star. It is also arguably, a hidden gem of British Musical Theatre awaiting rediscovery.