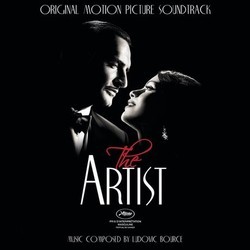 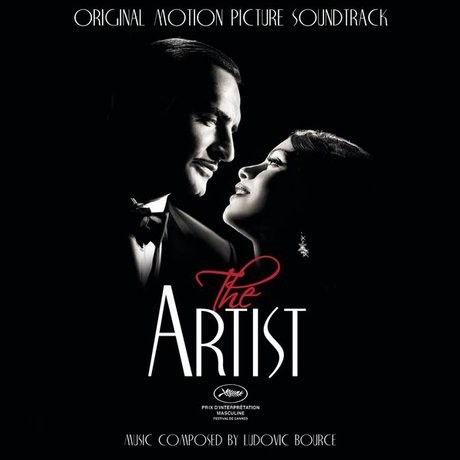 THE ARTIST
MUSIC BY LUDOVIC BOURCE.
REVIEW BY JOHN MANSELL .

Writing music for film is I think probably a hard task, al the timings have to be just so and the music obviously has to enhance the movie without being overpowering. So scoring a silent movie, must be even more difficult. I say this because of the amount of music that will be required, after all music in a silent movie has to do more than enhance it has to be part of the dialogue (that is not there) or it becomes the dialogue in effect. It is the romance, the comedy and also it is the timing and the punctuation for the film up on the screen. THE ARTIST is taking the cinema going world by storm, it is a black and white silent movie made in France which has received many nominations and also lifted a few major prizes in this the Awards season for movies released in 2011. The musical score is by gifted French composer Ludovic Bource, his score is in one word amazing, add to that delightful, exciting and emotive and you have the perfect ingredients for a great film score. It is an almost luxurious sounding work which harkens back to the days of when a full orchestra would be seated in the pit playing the musical accompaniment to many a silent classic. Flickering images and dramatic music made for a great time in the theatres way back then. Bource has created a soundtrack that although almost continuous is not in any way overbearing or intrusive, in fact you sit and watch the movie and are really not that conscious of the music because this talented composer has managed to score the film in a way that the music is or could be another actor playing out their part to the watching audience. There is a particularly lovely theme included which is track number 9, COMME UNA ROSE LARMES, solo piano picks out a plaintive and delicately emotive theme which is hauntingly beautiful with touches of melancholy. I was particularly impressed with the opening track of the movie. RUSSIA
1927, it is a near four minute cue that is full of drama and energy, played at the opening of the movie, the scene is set in a theatre where a movie is being screened, full orchestra is seen performing the music as the film is shown to the delight of the audience, Bource manages to cram many types and styles of music into this four minutes but it just flows and works so well. It is a stylish and entertaining composition, brass and strings being the main stay of the piece as the on screen hero escapes the clutches of a dastardly and evil villain with the help of his fearless and faithful dog and accompanied by his leading lady.
It really is a wonderful marriage of image and music. Track five is also a highlight for me, SILENT RUMBLE is text book film scoring from a bygone age, dramatic, fast paced and also full of vigour. The composer has also written some wonderful melodic material for the movie, Track six 1929, is an example of such writing, and although short lived it is an impressive and lingering melody, performed foremost by woodwind which are enhanced by subtle use of strings and more woods, a pleasing theme which is far too brief. This is an excellent score and I for one do hope that Bource will soon be stepping up to collect more awards, The BAFTA maybe and then the Oscar. Bravo Maestro Bource. Chaque note est le lieu avec soin et amour, et la musique est le cur de LARTISTE.
The Artist - 10/10 - Review of Chris R., submitted at 2012-01-23 19:44:57
While this film will most likely go by unnoticed by the public, it is one of the better films of 2011. Now most movie goers never really pay attention to the fact that music plays as much a role in the film as acting but for all that it does it goes widely unnoticed. For The Artist though the score is pretty much the bulk of the movie. Heralding us back to the age of the silent movie, the artist shows us a world of black and white, and totally devoid of sound effects, and accompanied by what may be one of the most ambitious scores of the modern age. The Artist score introduces us with a kind of playful melody in 'George Valentin' which has the kind of playful xylophone melody that is at once infectious and such a pleasant to listen to. Though the theme is good, on album some of it kind of begins to get repetitious and will cause those unfamiliar with the movie to grow bored.
The pleasant love theme for the score appears intermingled in 'Pretty Peppy' and comes full circle in 'Waltz for Peppy'.

The scores darker moments can be found in cues such as '1927 a Russian Affair' and 'Ghosts from the Past' which features a lot of dissonance heard being played by the orchestra and crescendo's wildly at the end. In encompassing with the films homage to the silent movie era there are a lot of references to the composers of yesteryear. Composers such as Max Steiner and Alfred Newman, even a terrific reference to the great Bernard Hermann can be heard withing the score. Such great care and detail was given to ensure that this music captured everything that made the silent movie era terrific.

Word to the wise though, while the music is great, its real application is for the screen, the main theme becomes a little worn after a while but that isn't a particularly a bad thing in this case (The theme is really that catchy). I would really advise at least seeing the movie because if not, the true magic of this score will go unnoticed.
Oscars: Best Original Score (Winner)