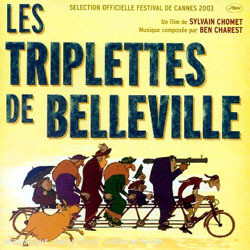 Les Triplettes de Belleville - 10/10 - Review of Pedro Bernardez, submitted at 2012-04-15 08:05:31
This wonderful album may be described as a send-up of sounds and ideas from the belle époque with a few other styles and novelties thrown in. The entire soundtrack won a César, or 'French Oscar', for Best Film Music in 2003, and one of its songs, 'Belleville Rendez-Vous' (provided in three versions on the CD), was Oscar-nominated for Best Original Song (also in 2003). Most of the tracks (12, or about 63%) are very much jazz-influenced, while the remainder explore other ideas.

Here are some notes on each one.

1. Sous Le Pont
A short piece for tuned bicycle wheel, elderly voices, claps and shoe taps, with other ambient sound effects thrown in (ships, traffic). It is actually used as source music in the film, being played by the character Mme Souza under a bridge when she realizes that the wheel she is carrying can produce different notes. The titular Triplets of Belleville, wandering nearby, join her for an impromptu performance that also includes transposed motfis from J. S. Bach's Prelude in C minor from Book I of the Well-Tempered Clavier.

2. Belleville Rendez-Vous
This is the Oscar-nominated song, performed in French by French singer -M- (who also produced a music video for it). It's a novelty piece for singer, voices, 'Django-guitar' and other sonorities. In the vein of 'Tout Va Trčs Bien Madame La Marquise' and similar ones from the era, the singer declares, in four rhyming couplets and a thrice-recurring refrain, that he doesn't want to spend his last days as a tired old man (in several exotic locales, no less), but rather 'swinging' like the Triplets of Belleville.

3. Générique d'Ouverture
Used as an opener for the film, it's an upbeat swing jazz band piece in the style of Benny Goodman.

4. Cabaret d'Ouverture
A work for voices, jazz band, guitar, piano (and other sounds) that accompanies an extended 'documentary' introductory sequence comprising several vaudevillian novelty acts. Here we meet the Triplets for the first time; they dance, sing and recite the refrain from 'Belleville Rendez-Vous' between each set of performances.

5. Tour de France
Played during the Tour de France in the movie, it's a piece for accordion and radio announcer. The aforementioned francophone announcer describes the bicycle race, sometimes in very graphic terms.

6. Attila Marcel
A gruesome cabaret song in the style of Edith Piaf in which the singer adoringly describes how her violent lover treats her. 'Marcel' may be a reference to Marcel Cedan, the man Piaf considered the love of her life and who passed away in a plane crash en route to see her. Attila is a reference to Attila the Hun.

9. Belleville Rendez-Vous (Maquette)
This is an early template version of the eponymous song.

11. Bach ŕ la Jazz
A 'jazzified' piano version of J. S. Bach's Prelude in C minor from Book I of the Well-Tempered Clavier.

12. Cabaret Aspirateur
A work played onstage by the Triplets and Mme Souza, composed mainly of four sound sources: a tuned bicycle wheel, a fridge, a crinkling newspaper, and a melody-capable vaccuum cleaner. It is the result of composer Benôit Charest seeing if he could 'make a song using a refrigerator, a vacuum cleaner, and a piece of paper.'.

14. Barbier Cieco Cieco
A Sicilian-language song for mandolin, accordion, trumpet, and a literal 'barbershop quartet' about a 'very, very blind' barber. Played when the handyman character is getting a haircut, it includes a subplot about a Neapolitan scoundrel as well as several out-of-context Sicilian words and references (including 'ossobucco', 'panatalone' and 'Cosa Nostra').

15. Pa Pa Pa Palavas
A French-language surf ballad in which the singer discusses meeting a woman on the quay and beach of Palavas. It includes the twangy guitar and saxophone sounds characteristic of this style as exemplified by, among others, Dick Dale; it also makes use of other sonorities, notably beach waves and the now-famous vaccuum cleaner.

17. Filiature
A jazzy, spy-themed piece with a steady rhythm, used when Mme Souza is on the handyman character's tail. String stabs and flute lines are very prominent.

18. Poursuite
A tense, jazzy piece that makes great use of triplets. It is used for the climactic chase scene, with the heroes being trailed by the French Mafia, and utilizes themes from several of the other tracks, including 'Thčme Bruno'.