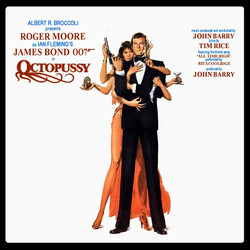 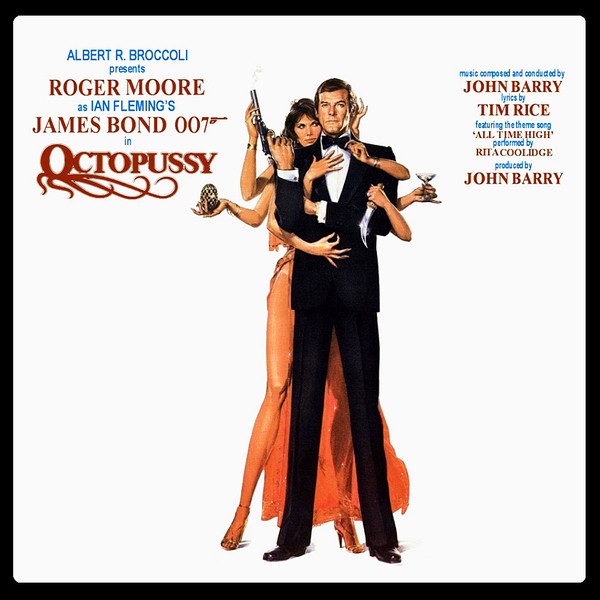 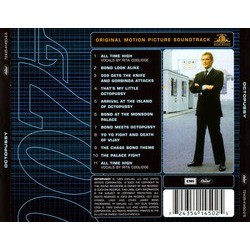 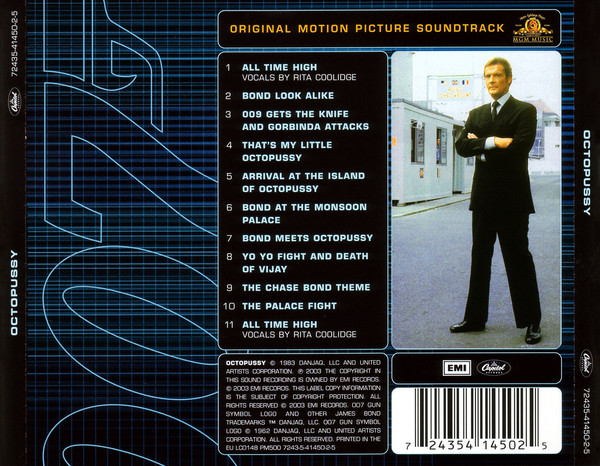 Octopussy - 08/10 - Review of Tom Daish, submitted at 2010-09-08 21:30:17
After only scoring alternate Bond films for a number of years, John Barry surged into a final triumvirate that included Roger Moore's final two films and Timothy Dalton's first. They are perhaps the three most diverse of Barry's scores, Octopussy having a broader feel in line with his more recent style, A View to a Kill containing some good action riffs and a neat electric guitar motif and The Living Daylights as a forward looking mixture of orchestra and synths demonstrating Barry has a surprising ease with technology, not something that would be assumed from his usual writing style.
Since Octopussy would be hard to make rhyme and scan during a song, Barry and lyricist Tim Rice settled on All Time High which is third in an informal trio of ego boosting ballads that began with Nobody Does it Better from The Spy Who Loved Me and continued with For Your Eyes Only. None of these songs is in what could be deemed the 'classic' Bond mode, but are perhaps three of the most pleasing entries. As usual, Barry puts the song to good use as a sultry love theme, notably in That's My Little Octopussy and Bond Meets Octopussy although the use is not as pervasive as in previous efforts. One nice touch is a minor key version used for Death of Vijay, a moment of genuine emotion and regret that is rare in a Bond film.

Despite track titles that promise swathes of action, it this is rather more low key. That is not to say static, merely that Barry uses restraint in an attempt to avoid hyping the ludicrous situations. Something younger film composers could occasionally remember. Only occasional glimpses of the Bond theme are heard and as is often the case with Barry, just the rising and falling opening. 009 Gets and Knife and the later Yo Yo Fight feature a typical Bond action motif of swirling strings, brass hits and a brief rising horn motif that set off against each other nicely. The Chase Bomb Theme (another classic track title) isn't exactly a notable Barry melody, but the building tension is typically well maintained. The action motif returns for The Palace Fight followed by an enjoyable burst of the Bond theme that ends the score, before a reprise of All Time High.

While dialogue is rarely a welcome addition to a soundtrack release, the three briefs extracts are of course the three moments that are an essential to any Bond film: the meeting with Moneypenny, the 'Bond, James Bond' introduction and of course a quick chat with Q about the latest amusingly implausible gadget. Roger Moore's laconic delivery is typically droll and they are brief enough not to be particularly intrusive. This contains no extra score over the original, extremely rare album release (the cover of which is featured on the inlay sheet), but there is still plenty here to enjoy. Perhaps the only disappointment of releasing Octopussy is that its relative newness already ensures good sound quality; almost all of Barry's earlier efforts deserve the same deluxe re-release treatment to improve the sound. The fold out liner notes are a bit clumsy to handle, but full of information and stills from the film. Do pay attention 007...
Trailer: