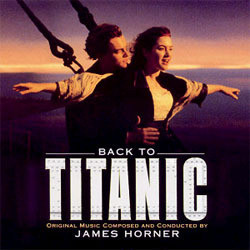 Back To Titanic - 08/10 - Review of Andreas Lindahl, submitted at 2008-01-20 21:25:40
The first track, one of the three new pieces composed by Horner for this soundtrack, the "Titanic Suite", is really nothing more than just a suite; the different themes arranged into one piece of music. If you haven't heard the first disc, this track probably is a very nice summary of all the themes, but if you already are familiar with the music, it really isn't anything special. "An Irish Party in Third Class" is very upbeat Irish music. This track has the sounds from the Steerage Party mixed in, so besides the stirring music we get to here foot stomps, clappings and voices, and it's really not that bad, actually. And the music is very captivating, every time I listen to this track I just have to clapp my hands and beat the time with my foot! "Alexander's Ragtime Band" is some source music played by I Salonisti. This piece of music was played somewhere in the movie by the ships' orchestra, but I can't remember where.

And then it's time for the sought after piano solo version of the love theme, performed by Horner himself. This is really a lovely piece of music, rather simple, but very beautiful. I remember how dissapointed I got when I found out that it had been left out on the first disc, but here it is, finally. "Jack Dawson's Luck" is more traditional Irish music. Very lively piece of music, but was never used in the film at all. "A Building Panic" is a great action track, played in the film when the dome implodes. Anyway, If you like the action tracks on the first disc, this should appeal to you.

"Nearer My God to Thee" is featured two times. The first time it's performed by I Salonisti, the same ensemble who played it in the film, and the second time it's played by Eileen Ivers on solo violin. I really can't see why they had to include it twice, when they instead could have put more music by James Horner on the disc, like for example the music played when they're filming inside the wreck. You know, when we see an old piano and Horner strums the piano a little, that music.

"Come Josephine, In My Flying Machine" is a song performed by Maire Brennan. It opens with some cool soundeffects; Officer Lowe calling out: "Is it anyone alive out there? Can anyone here me?" and then we hear Rose singing the first lines of the song after which Maire Brennan takes over. Really depressing version. It should be pointed out that the original song is not like this at all.

I don't know if "Lament" is composed by Horner (the liner notes says it includes "A Spailpin A Run", but that's it), and I don't know why it has been included here. Perhaps it was used in a scene that later was cut. Anyway, it's a very beautful, sad, Irish, track, with a lot of solo violin.

As I have already said there are three new compositions by Horner on this disc. The first being the "Titanic Suite". The second is called "A Shore Never Reached". It's rather slow and soft, with a lot of solo horn, which I like, but then the Uillieann Pipes crops up, and... well, I have to admit I'm really starting to get tired of that instrument. The third piece is called "Epilogue: The Deep and Timeless Sea", and this is the best. There's a lot of strings, and sometimes it is very reminiscent of Braveheart. There is almost no "new" music (at first I was a little dissapointed because of this, but then I remembered that this is not a new score, it's a second soundtrack...), although some of the themes actually are developed in new ways. Perhaps I should mention that these new pieces are performed by the London Symphony Orchestra and a real choir, the Chorister's of King's College, although the synth choir is used too, to get the right sound. To be honest I really don't know if I like the real choir better than the synth choir. I mean, when Horner wrote the score for Titanic, he wrote it for a synth choir so, in a way, the music is meant to be played, or performed, by an electronic choir. But I don't know, perhaps it's a matter of habit. Anyway it is nice to hear it performed by a real choir, just to hear what it sounds like.

Oh, and let's not forget the "new" version of "My Heart Will Go On". This one has soundclips mixed in. Nothing special really. It's still the same song.