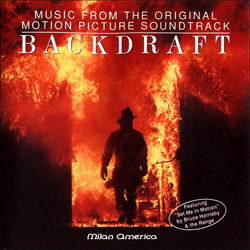 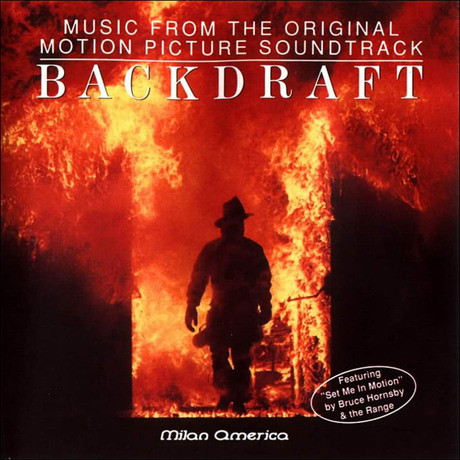 Show reviews in other languages
Backdraft - 08/10 - Review of Edmund Meinerts, submitted at 2009-09-27 21:41:31
Many of the more "traditionalistic" film music collectors snub the entire idea of Hans Zimmer, Media Ventures and the "revolution" in action film scoring that 1995's Crimson Tide and 1996's The Rock kicked off. Revolution, in this case, is an extremely apt way of describing the phenomenon, as the same basic ideas are continuously revolved with varying, but usually extremely limited amounts of originality washed in.

But four years prior to those two monumental changes to the face of film music, Hans Zimmer composed Backdraft, which was back then only his second action picture (following Black Rain in 1989). And, if one were to compare Backdraft to Crimson Tide and The Rock, one would find that the ideas that were considered so groundbreaking in the latter films had already been concocted and used to great effect in the former.

Zimmer's primary theme for Backdraft is an upbeat, major-key (which already sets it apart from the vast majority of his other themes) march, accompanied by an ever-ripping snare and medium drums. Heard at the offset in "Fighting 17th", Zimmer gives this idea, used to represent the heroism of Ron Howard's firefighters, several variatons, notably a minor-key one on solo trumpet in "335". The theme is given its most robust statements in the final two (score) tracks, "Fahrenheit 451" and "Show Me Your Firetruck".

The other major theme represents brotherhood and is first heard in (duh!) "Brothers", where it is performed on piano and light strings. It follows a typically simple Zimmer construct, but despite this is one of his most lyrical themes (the main theme of Zimmer's 2001 score to Pearl Harbor is similarly constructed). This theme also makes a reprise in "Show Me Your Firetruck", where it is intelligently modified to the march rhythms of the primary theme.

Much of Backdraft, though, especially the middle section, is thematically sparse and therefore not as strong a listening experience. "The Arsonist's Waltz", barely a waltz in the first place, tries to create a dark atmosphere the way Danny Elfman's then-recent music did for Batman, but ends up rather underachieving. "335" and the second half of "Brothers" are heavily electronic, employing rough synthetic effects resembling the sparking of loose wires. This fits well in the context of the film, but doesn't make for a pleasing listening experience on album.

"Burn It Down," on the other hand, is very much a Zimmer action piece, a strong forerunner to Crimson Tide and The Rock. Indeed, it features the chopping string figures that influenced Crimson Tide's now-famous "Roll Tide". "You Go, We Go" roots the emergence of Zimmer's budding style even more strongly, introducing a rhythmic chopping of modulating chord sequences whose influences have been frequently heard in Media Ventures work throughout the next two decades.

As a devoted fan of Hans Zimmer's, I am familiar with the branch of "traditionalist" film music collectors who resent the Media Ventures/Remote Control music "factory" for its general repetitiveness and penchant for favoring power over style. Those traditionalists should probably stay away from Backdraft. Zimmer enthusiasts, on the other hand, should definitely seek out this score, as, even more so than Crimson Tide or The Rock, Backdraft can truly be called the ultimate origin of Zimmer's popular and ubiquitous action style. It's a nostalgic reminder of the day when Hans Zimmer was a fresh, original variation on the standard Hollywood sound...ah, how tables are so quickly turned in this business!
Backdraft - 10/10 - Review of Andreas Lindahl, submitted at 2008-01-20 21:25:40
This score is very electronic, although the orchestra is used too, and is packed with action. Zimmer really is the master of rythms, and this score is a fine example of what he can do with his percussions and synths. The main theme, a march, is really powerful, and the heavy percussions really add to the power of the music. Just listen to "Show Me your Firetruck" where the main theme gets an excellent rendition, with a lot of brass and percussion.

But there are tender moments too. Like for example in the track "Brothers" which is a very melodic, beautiful and a little sad, track, where Zimmer makes use of the entire orchestra and the piano, as well as electronic sounds.

There are two song by Bruce Hornsby included, placed in the beginning and in the end, so if you don't like them at least they don't interrupt the flow of the music.

If you like The Rock and Zimmer's other action scores I can guarantee that you are going to like this score.
Backdraft - 08/10 - Review of Tom Daish, submitted at 2010-09-07 22:27:19
One of Zimmer's best scores to date is a great mixture of conventional orchestra, choir and synths is a thrilling action score. The action does tend to get a little too much at times and only occasionally becomes just a loud unmusical mess. It starts off with a great march (well, track 2 actually) which then descends into eerie synth effects. The following three tracks aren't that great, but once track 6 gets going, it's excellent thumping action music all the way to the end. Zimmer employs all his usual Zimmer-esque motifs. It only becomes a little over bombastic a couple of times, but if it doesn't give an adrenaline rush when played really loudly, then you probably need a rather large dose of coffee! To my mind, many of Zimmer's action scores sound like Backdraft in places, particularly The Rock and Crimson Tide, but since this was the first, I certainly set a good standard that has been maintained well since.
The music of this soundtrack was used in: