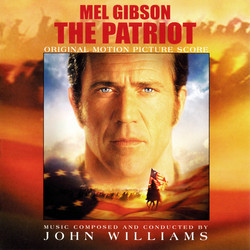 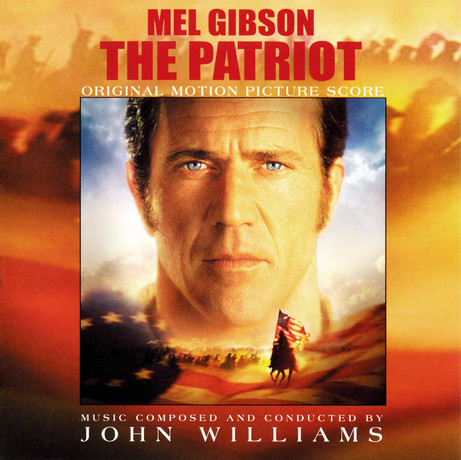 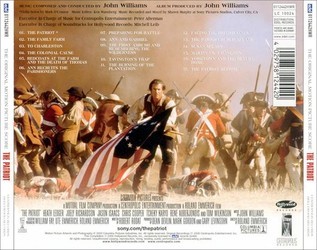 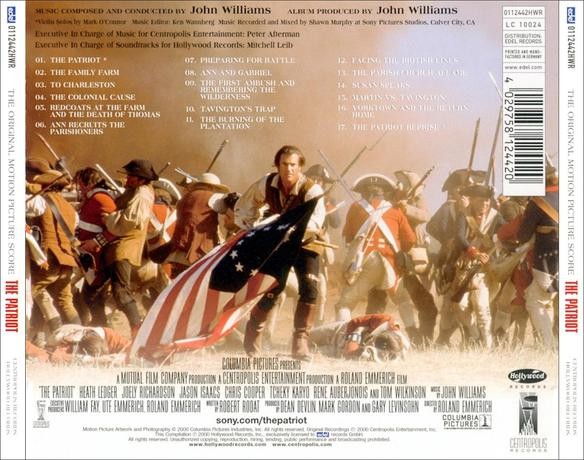 Show reviews in other languages
The Patriot - 08/10 - Review of Tom Daish, submitted at 2010-10-02 13:19:28
I think this must go down as the first vaguely main-stream film that John Williams has scored, that isn't Spielberg or Lucas, in a very long time. After the Godzilla debacle, it seems that Dean Devlin and Roland Emmerich have somewhat redeemed themselves with what is (crudely speaking) an American Civil War setting of Braveheart. I suspect that's something of a sweeping generalisation (no-one seems to have mentioned Glory as a comparison that I can see), but does sum up the gist of the plot. For whatever reason, Emmerich and Devlin didn't like whatever David Arnold had written (I can't see how Arnold could have gone far wrong given the type of film) and were lucky enough to attract the interest of John Williams who then became attached to the project, to many people's surprise and delight.

The now familiar bookending approach is taken yet again, with the only difference between the two versions being a very brief and curiously out of place coda at the end of the closing version. I guess there aren't too many different approaches with a film such as this and Williams has gone with having two themes, the first being a homely, familial theme; a folksy violin melody against acoustic guitar which is quite lovely. I didn't recall it at all the first time I heard it, but like the wonderful Anakin's Theme from you know what, it is a theme that grows on you with each listen, the harmonic shifts are notably splendid. Williams seems keen on harmonies that go off in unexpected directions and it is something I am getting rather fond of. The second theme is of course more noble and heraldic in stature, although it generally avoids being too nauseatingly heroic or, more curiously, over-loaded with patriotism. Perhaps the most memorable part about it is the positively sadistic piccolo duet that plays in counterpoint and the somewhat over-familiar snare drum pattern. Although Williams' staple as a film composer has often been the brassy and thrilling moments it is probably the folksy strains of the solo fiddle are what stick in the mind more after the event.

I think it would be reasonable to say that this is what everyone wanted Saving Private Ryan to sound like, but I can't imagine anything more inappropriate for Spielberg's film, which didn't really need any music at all. The Patriot isn't quite filled with action cues, but it does have more than usual for a recent Williams effort. However, the concert arrangement bookend pieces set the trend for what is memorable and what is less so and in the end, the gentle, folksy sections are almost certainly more convincing than the well wrought, if not oustanding action interludes. They certainly don't have the imagination and balletic sweep of his recent Star Wars outing.

I dare not confess to feeling an album is perhaps a fraction long, but it does sag somewhat in places and unlike the slow moving Saving Private Ryan, doesn't really have that certain something that made that particular score so wonderful. The themes are repeated fairly often throughout and don't seem to be malleable enough to be varied a great deal. The Patriot certainly has its moments, but I don't think that it really sparked Williams' imagination or emotional button quite as much as it should have. Of course a slightly less than brilliant John Williams score is still a hundred times better than the work of some composers and I must confess that it has grown on me a lot since I first heard it. As with the lower impact offerings Williams has produced recently, several listens are essential to benefit fully. I imagine the results are more subdued than anything Arnold would have written, but possibly more satisfying in the long run.
The Patriot - 06/10 - Review of Andreas Lindahl, submitted at 2008-01-20 21:25:40
First, let me get this straight - this patriotic, flagwaving, "Mel-Gibson-gets-mad-and-kills-a-bunch-of-bad-English-people" shallow drama titled The Patriot is one of the worst films of the year 2000 in my opinion. With its really biased point of view, like for instance in the many battle field scenes, where we see the Americans portraid as human beings, scared to death, while the English soldiers act like robots, quitely marching, trying to look really mean and cold, this is a terrible showcase of the American "we are the good guys, the other ones are the bad ones" mentality. (And no, I'm not saying that the English should be the good guys in this film. It's just that the world never is entirely black and white...) So, I don't like the film, but what about the score?

Well, like the film, John Williams' score fails to deliver. Basically, I find it too shallow and uninteresting, both in the film and on CD. Sure, there are some nice cues, and some rather good major themes, such as the slow main theme, full of Americana and idyll, and the more heroic and patriotic upbeat ditty, similar in tone to the composers' trumpet fanfare from Jurassic Park. But overall, this score isn't what I had expected it to be, which of course isn't John Williams' fault. I mean, how should he know what I want? But what I'm trying to say is that Williams could have written a score a lot better than this. Another thing that surprised me is the dark nature of the score. There's a lot of low, uneasy brass, and dissonant passages and this makes the score somewhat depressing listening to.

The action music - and there's a lot of it - draws on musical ideas planted in Williams' score for Star Wars: The Phantom Menace, apart from being typical Williams action writing, that is, meaning a lot of brass and percussion. Rather exhausting listening to, actually. Now, it may sound as if I'm totally disgusted by this score, which is really not the case. Actually, I enjoy it quite a bit at times. But at other times it's far too uninteresting and unoriginal - Williams can do better than this. Maybe the problem is that the score isn't as patriotic as the film it was written for... For me, the highlights are the really bombastic parts, such as when that upbeat fanfare pops up, performed by horns and trumpets, supported by the entire orchestra. Great stuff.

The CD opens and closes with the standard concert version of the scores' main themes. A technique Williams has used for many years now, and something most of you are familiar with, I suppose.
Oscars: Best Original Score (Nominee)