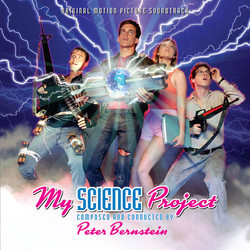 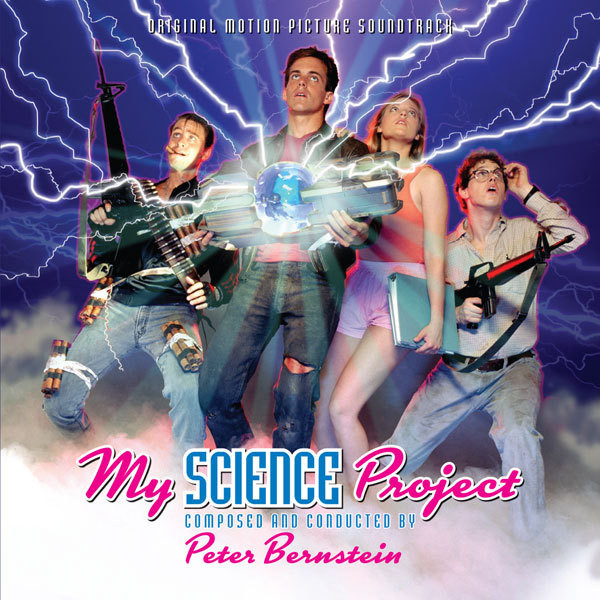 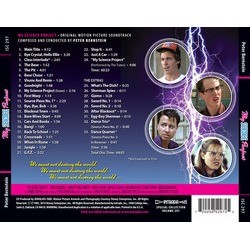 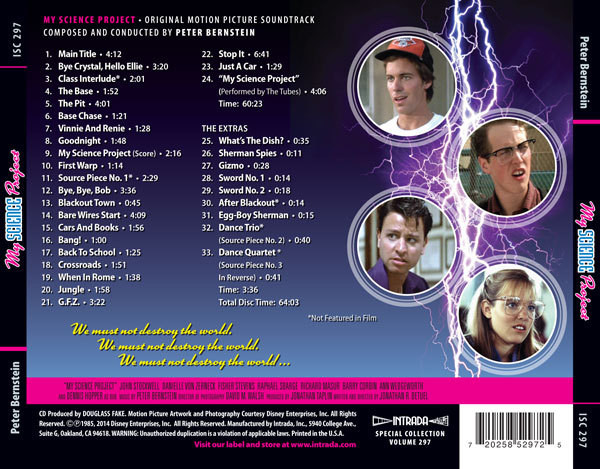 For the 1985 sci-fi film, My Science Project, composer Peter Bernstein and writer/director Jonathan Betuel agreed the film should have a traditional symphonic score, laced with elements of synthesizers and electronics. The score is largely in the Romantic orchestral vein popularized by John Williams and others in that decade’s biggest blockbusters. Bernstein wrote a six-note motif for the plot-generating gizmo, a chromatic fanfare that mingles menace and wonder. Bernstein fashioned his score with multiple layers of material, creating a massive musical canvas. He worked with the pop sensibilities of guitar and rhythm section to balance the numerous songs, created additional textures from several synthesized keyboards, combined elements of both to create new sonorities—and, of course, composed a considerable amount of music for large orchestra as well. Also included with this release is the pulsating end title song, “My Science Project' performed by The Tubes.

To present all of this fascinating music on CD for the first time, Intrada was given access to the masters on 2” 24-track session rolls and 1/2” multi-track keyboard session tapes recorded by Shawn Murphy at the Warner Bros. Scoring Stage.

My Science Project begins with Michael Harlan (John Stockwell) at risk of not graduating from high school unless he impresses his science teacher, “Bob”—a lingering hippie played by Dennis Hopper—with a winning class project. A “gearhead” obsessed with cars, Michael decides to root around an old junkyard of decommissioned military aircraft for something to scam off as his invention. He stumbles across a glowing “gizmo” from a government-buried UFO, soon revealed as a havocwreaking time portal. Sucked into this whirlwind are Michael’s nerdy-but-interested-and-secretly-beautiful classmate Ellie (Danielle von Zerneck) and his wisecracking buddy from Brooklyn, Vince (Fisher Stevens). The gizmo sucks Bob back into the glorious ’60s—and spits a cacophony of ancient monsters, angry Viet Cong and a Tyrannosaurus rex into their present-day high school.