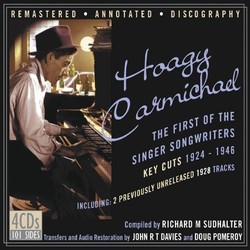 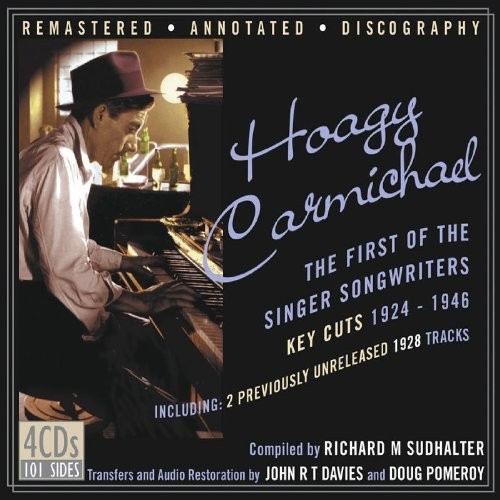 Most songwriters are just that: songwriters. But Hoagy had a special flair as a singer and pianist and made many fine recordings from the '20s to the '50s. Here are his best performances ( Star Dust; Riverboat Shuffle; Rockin' Chair; Lazy Bones; Georgia on My Mind; Hong Kong Blues ) plus My Sweet Louis Armstrong; March of the Hoodlums Duke Ellington; Daybreak Paul Whiteman; Old Man Harlem Dorsey Brothers Orchestra; Washboard Blues Connee Boswell & Casa Loma Orchestra; New Orleans Bennie Moten, plus Mildred Bailey, Fletcher Henderson and more!
There's a Hollywood archetype. He's a midwesterner - rangy, tough, laconic and deceptively slow to anger. Hoagy Carmichael was the genuine article. Born Hoaglund Howard Carmichael in 1899, in Bloomington Indiana, he never lost his distinctive drawl or easygoing manner. His father was an electrician who wandered far to find work and his mother augmented the family income by playing piano at cinemas and dances. She was Hoagy's music teacher, although he later credited a local black player, Reggie Duval with teaching him the rudiments of jazz. Hoagy's parents encouraged their only child's musical leanings, but they expected him to pursue a more secure profession. To this end he enrolled at Indiana State University to study law. Hoagy worked his way through school, but organized and played at student dances. One band he regularly booked was The Wolverines which featured young cornet star Bix Beiderbecke. Bix and Hoagy struck up an instant friendship and when The Wolverines were booked for a Gennett recording session, Bix asked Hoagy to contribute a tune. The result was 'Riverboat Shuffle' and his very first composition was recored by one of the most enduring stars in jazz. A year later Hoagy was asked to repeat the trick and this time he came up with 'Boneyard Shuffle' and 'Washboard Blues'. He played piano on the session. Hoagy qualified as a lawyer and opened a practice in Palm Beach. One day, The Wolverines breezed through and offered him a gig on a cruise headed for Cuba. This was probably the last time he considered himself a lawyer rather than a musician. Back in Bloomington in 1927, he hooked up with the Emil Seidle Orchestra and recorded Star Dust. In time it would become America's most recorded melody.