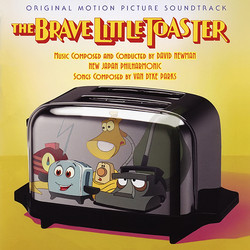 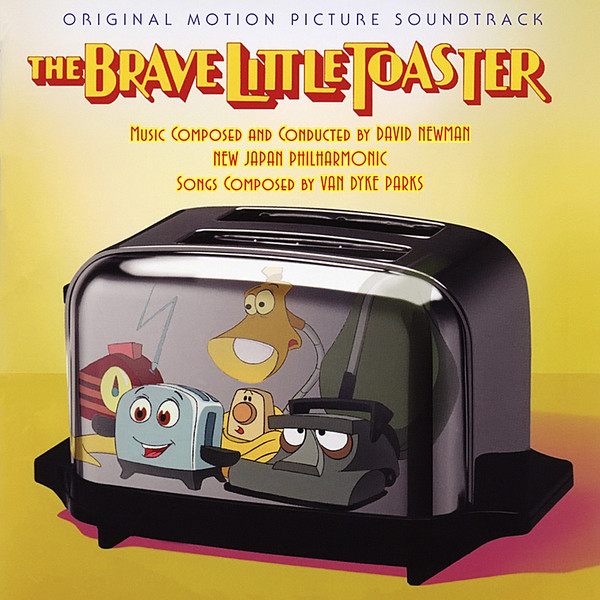 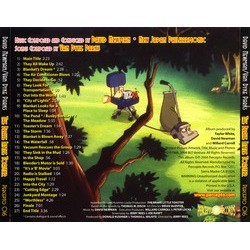 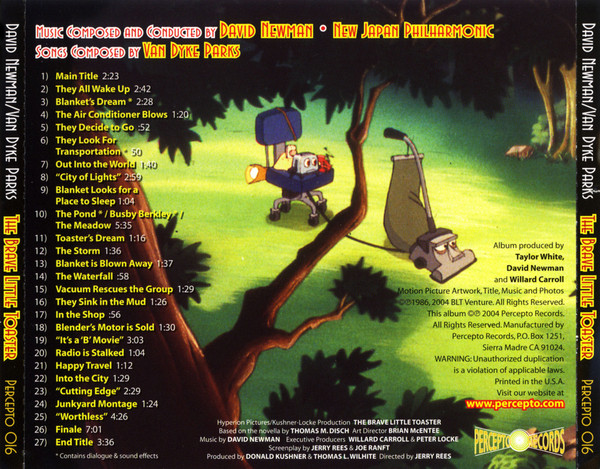 The Brave Little Toaster - 09/10 - Review of Jason FLZ, submitted at 2011-05-11 01:25:43
Before Toy Story, before Pixar, before animated films became considered TRUE forms of art and accepted into things like the Academy Awards, came 'The Brave Little Toaster.' The film, released by Disney, was a heartfelt look into a group of appliances who set out on an epic journey to find their lost master. BLT is a surprisingly good (not too mention dark) animated film with many levels of symbolism and powerful imagery. Unfortunately, BLT didn't make a big impact, but managed to gain a large cult following. Along for the ride came quirky composer David Newman who offered one of his strongest efforts to date.

Before talking about the score, let me delve into the film's songs, written by Van Dyke Parks. The main song for the film is 'City of Lights', featuring the full cast. While not particularly spectacular, 'City of Lights' is annoyingly catchy with some fun little lines. 'It's A B Movie' is a creepy, 1950's horror movie sounding track. The Peter Lorre voice actor delivers some interesting pieces but the song itself isn't much to blink at. 'Cutting Edge' is cheesy 80's song, complete with electronics, synthesizers, and some bland vocals. 'Worthless' is probably the most powerful song of the four. It gives some varying vocals while sounding foreboding. Overall, the songs aren't particularly exciting, but they still are original and fun.

David Newman's score for the film itself is interesting. At times it sounds like most animated kid's films; fun and lighthearted. Other times, however, Newman manages to capture alot of the film's dark atmosphere with some ominous music. The score itself is a long way from being the stereotypical kids music you would expect. Alot of the music is built around the song 'City of Lights' which sounds powerful when put through the orchestra, best heard in 'Out Into The World', 'Happy Travel' and 'End Credits'. Newman toys around with some of the lighter material in the first half of the album, the quirky blues music in 'They Look For Transportation' and the hilarious orchestra in 'The Pond'.

The second half of the album is where Newman uses more atmospheric music to (perfectly) convey the dark mood of the film. 'Blanket is Blown Away', 'The Waterfall', 'They Sink in the Mud', and 'Junkyard Montage' are some examples of the moodier pieces. 'The Air Conditioner Blows', 'The Storm', and 'Finale' mix in some more fast paced thrill music. Other times, however, the score is very simplistic and beautiful, relying on emotion to fill in the gaps.

'The Brave Little Toaster' is a true animated classic and should be put among the ranks of most great Disney films. The score by David Newman really is powerful as well, focusing on the more emotional aspects of the film. While managing to be occasionally fun and bouncy (primarily with the songs on the album), BLT is mostly dark and moody. My only complaint is more of a warning, if you like listening to more upbeat animated scores, look elsewhere. 'The Brave Little Toaster' is a dark journey that will either impress or depress you.