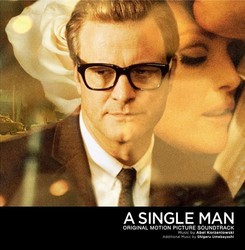 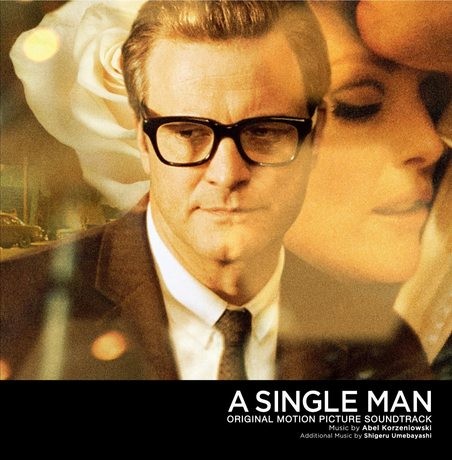 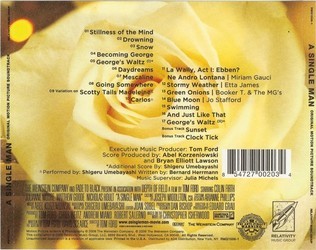 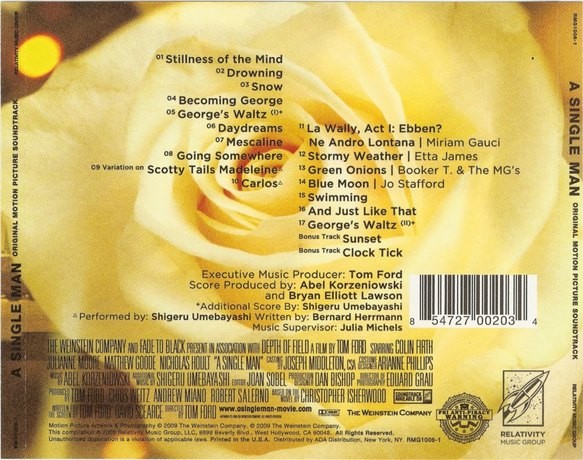 Show reviews in other languages
A Single Man - 07/10 - Review of Steve Ewing, submitted at 2010-10-20 21:20:21 en
A Single Man is a film addressing a very serious issue, and the films soundtrack is no less serious. In spite of the nature of the film, the music is not laborious or burdensome, and when viewing the film, the music works well. As a stand-alone soundtrack, however, it lacks variety and any emotion (other than melancholy) necessary to keep the listener engaged.

I think there must have been a concern about the music becoming stale, because in addition to composer Abel Korzeniowski, Shigeru Umebayashi was brought in to help write some of the music. Jazz standards by the likes of Etta James and Booker T. & The MGs serve as a reminder of the times in which the film is set, and also help inject some diversity into the soundtrack.

All is not lost, though, as there are plenty of features that merit praise. The music largely consists of string instrumentation, with some tracks using just a handful of strings while others employing an entire chamber-sized section. In any event, the music performed by the strings is staid and mysterious, much like the life of the films protagonist. This is an excellent instance of translating the mood of the film onto the score. Another of the soundtracks assets is the solo violin, particularly on the track And Just Like That. It is stunningly pure and beautiful, and Korzeniowski does a good job of letting the soloist shine through by only writing in soft tremolos for the rest of the strings.

If youve ever seen The Illusionist or any film in which Philip Glass composed the music, of if youve ever heard Glasss classical compositions, youll know that his work relies very heavily on repeating motifs of several notes, oftentimes played by the string section incessantly. The music is entirely reliant on its relativity to whats going on in the movie and very rarely remains interesting when just listened to. Although I am reluctant to ever compliment score-writing that fills up so much time with a simple, repeating melody, I have to admit that the motifs used by Korzeniowski and Umebayashi do indeed represent the inner torment and tension of the films protagonist very well.

The final track, Clock Tick, is exactly what one would suspect: the track employs the string section once more, which plays more of the incessant, Glass-like motifs; underlying it is a steady ticking like the second hand of an analog clock. While Im sure the track and the ticking are meant to represent the inevitability of the protagonists fate (to say anything further would spoil the movie), I couldnt help but think as I listened to this last track that Korzeniowski was actually reassuring us that the mundane soundtrack was mercifully coming to a close.

Overall, I suppose I would say that while I enjoy and appreciate the composers ability to take the emotions of the film and put them into the music, I disagree with the manner in which they did so (motifs). The fact of the matter is, the music played by the varying sizes of string ensembles is rich and beautiful, and that a misplayed note can be heard from time to time says to me that the music has been recorded and preserved in a mostly natural and unedited state. Such a method of recording is far more enjoyable than a canned and overly-edited recording and does such a better job at allowing the music to really connect with the listener. And if this music achieves anything, then it is translating to the listener the torment and mood of the protagonist.
World Soundtrack Awards: Discovery of the Year (Winner)
World Soundtrack Awards: Public Choice Award (Winner)
World Soundtrack Awards: Best Original Soundtrack of the Year (Nominee)