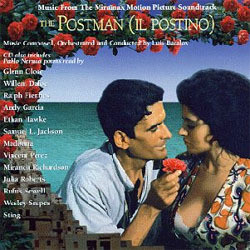 Hide reviews in other languages
The Postman - 06/10 - Review of Tom Daish, submitted at 2010-09-07 22:07:37 (English)
It's never good to start a review on a tirade, but here I go anyway. Il Postino highlights two (at least) of the most obvious injustices of the best score Oscar in recent years. Firstly, it beat out two of James Horner's finest scores - Apollo 13 and Braveheart - both of which are superior to his eventual statue winner, Titanic. The theory goes that having two scores nominated split the vote so overall Horner would likely have won, but individually failed to match the count for Bacalov's work. Maybe there's a case for only one score per composer being nominated. The second and perhaps most important Oscar oversight is that Ennio Morricone has failed to pick up even one Oscar and has only received a handful of nominations. True, his largely European orientated output doesn't help, but surely The Mission, Once Upon a Time in America or The Legend of 1900 were prominent enough in Hollywood to get noticed. Given that he's unlikely to win, save for a random piece of good luck, here's hoping he receives a lifetime achievement award soon.
The comment about Morricone might seem out of the blue, but only a couple of minutes into Il Postino and you could swear it was a Morricone score. The main theme sounds like an outtake from Cinema Paradiso (which is the recommended purchasing companion at Amazon - oh the irony), even down to the occasional swaying clarinet motif in the background. However, it does have considerable charm which is just as well given its omnipresence. Of course, many Oscars have been won on the back of music sounding like the work of others, but when the link is so clear and to a composer of such superior skill, who has remained largely unrewarded, it's an extreme frustration. Perhaps it's a little rich for me to claim any balance in this review from this point, it is worth noting that Bacalov's score is extremely pleasant and enjoyable. Beyond its similarity to the Morricone, the Mediterranean charm and whimsy is very appealing, much in the way of Nicola Piovani's similarly awarded Life is Beautiful (which just about merited its win).

There are pleasing asides such as the sprightly Loved By Women and the period song, Madreselva, both in original, crackles and all, performances and a newly recorded instrumental later on. There are several other versions of the album than that reviewed here; one has just the music contained on this release (with no poetry), but one with an extended extra version of the theme, although given its prominence in almost every track this seems almost entirely unnecessary. The fifteen tracks of poetry readings are performed by some notable Hollywood names including Julia Roberts, Glenn Close, Samuel L Jackson and Willem Dafoe, plus luvvies Miranda Richardson, Ralph Fiennes and Rufus Sewell. A nice bonus for poetry lovers, which evidently includes those Oscar baiters the Weinsteins, as evidenced in their liner note. If it weren't a somewhat undeserving Oscar winning, Bacalov's score would hardly have been noticed, but for those who enjoy their gentle European scores or wish there was a Cinema Paradiso 2: The Multiplex Strikes Back, it's a charmer.
The Postman - 06/10 - Review of Andreas Lindahl, submitted at 2008-01-20 21:25:40 (English)
For Horner fans, Il Postino will always be the score that "stole" Horner's Academy Award in 1996. Horner's chance to take home the award was rather good, as two of his scores, Braveheart and Apollo 13 - both superb - were nominated. Enter Luis Bacalov and Il Postino.

Was it a worthy winner, then? Well, I think that Braveheart and Apollo 13 both are far superior scores, but one cannot deny that Il Postino is a good score, with some very beautiful parts. Strings, woodwinds and bandoneon dominates the orchestrations, and together with typical Italian progressions and harmonies, the result is a romantic score, which is quite relaxing listening to, but nothing more.

But what lowers the impression, and the quality of the score, is the fact that it's very repetetive and monotonous. It's pretty much the same theme - which is very lyrical and beautiful neverthless - played over and over again, by different ensembles. There's the trio version, the harpsichord and string version and so on, and to be frank it gets a little enervating.