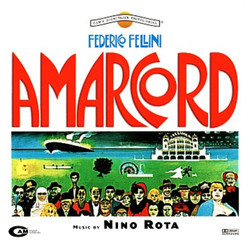 Amarcord - 08/10 - Review of Tom Daish, submitted at 2010-10-10 11:09:16
Italy has, without doubt, produced some of the finest composers to have their music grace the silver screen and perhaps the two most notable are Ennio Morricone and Nino Rota. However, unlike Morricone's mixture of the bizarre and the outrageously beautiful, Rota's music was much more rooted in traditional Italian music. It ranged from full orchestral music with much style in common with the great Italian opera composers to the light, jazzy European cafe sound. The Godfather films would undoubtedly have been missing something without his proud, indelible theme. Like Morricone though, much of Rota's work has gone somewhat unnoticed simply because it wasn't produced in Hollywood. A great shame, but it does at least leave a whole slew of music to discover for the careful collector.

Amarcord is one of Rota's most well known non-Hollywood scores and made somewhat infamous by its inclusion in Horner's main theme for Honey I Shrunk the Kids which resulted in a law suit from Rota's estate. A wise move since the themes are identical. It may be worth noting that I have spotted the main theme from Amarcord appearing in other Rota scores, so even the greatest of composers aren't totally escaped from repeating themselves, although at least it was Rota's in the first place. I must admit that Amarcord not only surprised, but somewhat disappointed me the first time. To those used to Jerry Goldsmith or Alex North, Rota's music does come across as very much like a series of pop instrumentals. Rota is not unaccustomed to creating large orchestral scores, but for many of Fellini's films, a more nostalgic set of instrumentals to cover almost anecdotal film making were the order of the day. There is a laid back charm to each and every cue on the album, but it certainly isn't Rota stretching his compositional skills to the limit.

The orchestra does appear from time to time, either backing a jazzy saxophone set piece, but most notably in the gorgeous La Gradisca e Il Principe. The more I listen to Amarcord, the more it grows on me and has an affecting nostalgia, not unlike Morricone's delicious Cinema Paradiso, although Rota's doesn't have perhaps the same dramatic foundations. I suspect orchestral score fans will be disappointed, but as a selection of wonderful jazz instrumentals, it's a boon and well worth half an hour of anyone's time.