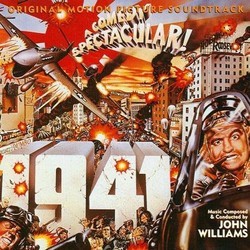 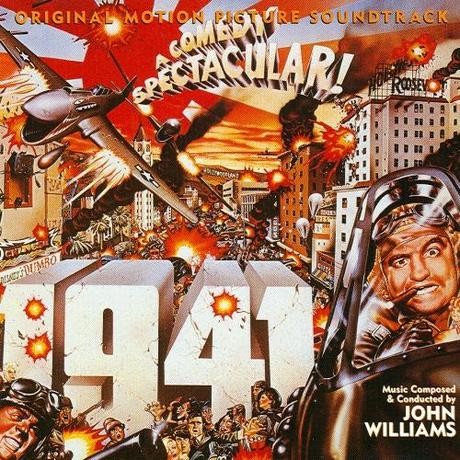 1941 - 06/10 - Review of Tom Daish, submitted at 2010-10-02 12:09:57
This is a strange entry in the Spielberg/Williams collaboration, it is probably the most ridiculed of all Spielberg's film. As a comedy it was a major flop and is probably his one and only failure (all relative of course). The score is a mixed bag that gets off to a flying march with his quasi-serious march. Full of infectious rhythms and patriotic riffs, it sets the tone nicely. The rest alternates between snatches of the march, somewhat derivative music (from Star Wars mainly) and some more tongue in cheek dashing about. The Invasion builds the tension quite well and if it had been a bit more serious it would have worked in a 'straight' film. Riot at the U.S.O. incorporates the nicely comedic and bouncy Rakes of Mallow, as does The Battle of Hollywood. Swing, Swing Swing, I am informed, is a take off of Sing, Sing, Sing, although Williams' version does not include any lyrics. Quite how it relates to the story, I have no idea, but the New Orleans jazz style doesn't do much for me, but the orchestra and soloists attack it with great gusto. The strange thing is, the rest of the performances don't quite match this enthusiasm at times. I don't think the orchestra is all that large and so the sound is not greatly expansive. Towards the end, the music perks up somewhat starting with the Battle for Hollywood, a preposterous titles if ever I heard one. This is more original than the earlier cues and certainly has to be one of the strangest cues for a battle I can think of, but as this is a comedy, it is almost certainly entirely appropriate. The Finale rounds out with another rendition of the March, along with canons (really!) as well as a few from John Belushi at the end! In general, this isn't one of Williams' best efforts, but that is mostly due to the nature of the film I suspect, but the march is one of his best, I certainly prefer it to the March from Midway. The CD isn't very long, but I don't think this damages it all that much, this isn't a 'great' Williams score, but that is truly a relative measure.