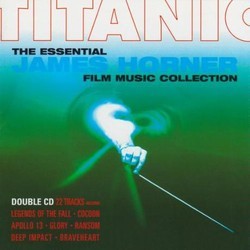 Titanic - The Essential James Horner Collection - 06/10 - Review of Tom Daish, submitted at 2010-09-26 20:01:57
When it comes to a good thing, Silva Screen are always up there at the right place at the right time (or so it would seem) and not being slouches, they have joined the continuing crusade to find as many things related to Titanic that they can. What Silva Screen have managed that so far no-one else has managed is to provide a good overview of Horner's work on a very reasonably priced two CD set. While there are a good number of tracks from old Silva Screen albums, this won't bother the casual buyer (I assume they are aiming at this market anyway) too much. I admit that I do have a few of the tracks on other CDs, but at the price I paid, it is worth it for the new stuff alone.

The tracks from Titanic are reasonably obvious, although I think I would have picked Southampton instead of Take Her to Sea, Mr Murdoch, as I think the former has just a little bit more life to it. The symphonic version of My Heart Will Go On is actually rather good, once you get used to it. Of course, many people will be sick of the thought of actually listening to it again, but I rather liked it. Other of James Horner's more recent 'quiet' scores are represented with Braveheart, Legends of the Fall, Apollo 13 and Glory. The latter of which is taken from the original manuscripts and while the end credits from Glory sound pretty much the same (depsite a fractionally lathargic performance at the opening), Charging Fort Wagner has considerably more choir and this actually makes it sound less like Carmina Burana as well I feel. However, what it does lose in this version is the heart rending heroism that the ending of that track had on the original. This is just a little too bold for me, despite being an interesting revelation.

Animated scores are represented reasonably well, with the end credits from Land Before Time and a track from We're Back: A Dinosaur's Story. The former seems to be missing some of the brass at some points, at least it's not nearly so prominent as in the original recording. We're Back is a really great fun and it makes me look forward to hearing this score even more. Live action adventures are presented well, although these tend to be the place where the performance is a little bit of a let down. The Rocketeer is very poorly paced with the opening piano rendition being at a slow, but not overly so, performance, but when the thing gets going, it suddenly lurches into 5th gear and starts hammering along, a little to fast for the players I feel. Willow is rather ropey, the playing doesn't seem to be very together much of the time, although the quiet sections are nice, especially when the choir join in. Of cou rse, comparing to the original recording of Willow is perhaps unfair, since it's performed by the London Symphony Orchestra (as are many of the original scores that feature on this album - thus comparing the re-recording will often be a tad unfair.)

I could continue referencing Battle Beyond the Stars, Cocoon, Patriot Games, Ransom and others, but basically the same things apply. The performances are slightly variable, the more excitable things getting the better of the Prague performers, but the more lyrical material getting a good, full-bodied performance. None of the performances are terrible, which is always good! Horner novices will find this album helpful as virtually all Horner things that people like are on the CD, with perhaps the exception of Krull which would have made a worthwhile inclusion. Horner veterans won't find much of interest as apart from Battle Beyond the Stars and Name of the Rosem (which is fairly poor anyway), everything else is still reasonably easy to get hold of and so the album is really someone of an unnecessary extravegance.