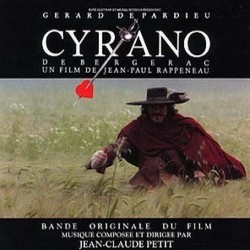 Cyrano de Bergerac - 09/10 - Review of Tom Daish, submitted at 2010-10-08 22:07:29
The story of Cyrano de Bergerac is a classic love triangle as the expansively hootered Cyrano woos his beloved via one of his officers (who also loves the woman, Roxane) by supplying him with witty and romantic poetry. The story is perhaps best known to American audiences in the form of Steve Martin's wonderful updating in Roxanne, but here Gerard Depardieu plays Cyrano, directed by the unprolific, but highly regarded Jean-Paul Rappeneau. Composer Jean-Claude Petit is probably best known for his scores to Jean de Florette and its sequel, Manon des Sources, but has scored dozens of other films and television dramas (largely in his native France) and can be spotted in Quentin Tarantino's Kill Bill, as a musician onscreen.

It wouldn't be unfair to say that Cyrano de Bergerac is a romanticised period score - it doesn't stick rigidly to the era, but by the inclusion of the spinet and some baroque fugal passages, there is enough to suggest the time without it being the music's sole focus. Petit manages to mix the baroque with the romantic on a number of occasions, notably in The Marriage and The Lute which both contain, unsurprisingly, a lute that echoes the more intimate passages of Rota's Romeo & Juliet. At the opposite end of the spectrum is a mysterious rising motif which (deliberately) suggest's Danny Elfman's Batman theme. It is generally fairly well disguised and doesn't play as a darkly heroic fanfare, but more as a dramatic scene opener. The only time the resemblance becomes more than skin deep is during The Gate of Nesle where the motif resolves into something more percussive.

Petit's score is a nice mixture of vignettes; there are exciting, balletic scherzos in the shape of The Duel and Arrival of Roxanne, the witty Mad Man, with a humorous trumpet line, but this is a tragedy and so Death of Christian and Death of Cyrano are played with a genuine sincerity. The movement from one musical period or level of drama is handled in such a way that the comedy and tragedy play perfectly alongside. This is a re-release of the now out of date original album and although it contains no new music, there is an interesting liner note from the composer on the mixture of baroque and more recent musical styles. At a time where film music seems less capable of filling the time allotted on disc, Petit's music has rarely a weak moment and while some may be upset by the Elfman influence (it doesn't occur often and it done at the specific request of the director), this isn't really enough to detract from an extremely fine score.