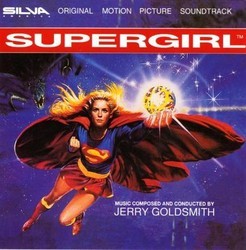 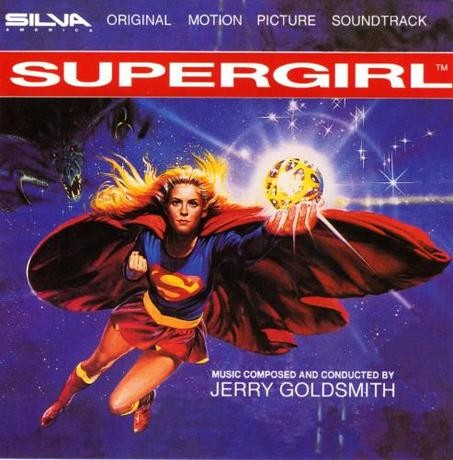 Supergirl - 08/10 - Review of Tom Daish, submitted at 2010-09-13 20:31:14
As a shameless cash-in on the Superman phenomenon, the producers decided that the Man of Steel should have a younger, more attractive cousin and so Supergirl was born. Following in the tracks of Williams' superb original score is Jerry Goldsmith, who is no stranger to writing scores for poor imitations of films which Williams has scored. Of course, the scores were always much better than the films themselves and Supergirl does nothing to disprove that. Starting with a cracking overture, the Supergirl theme is introduced. This is a much more motif-like theme than the more linear Williams theme. It is kind of like the Raider's March inverted and is immensely catchy, sometimes to the point of annoying, but works extremely well for whenever the Girl of Steel is doing something heroic. The love theme is also introduced and is one of Goldsmith's best stabs at romance, albeit unashamedly overblown, but perfect for the larger than life movie. Following that, the theme for the villain, Selena and her chronies is introduced; a simplistic, growling theme in low brass and fairly effective in communicating menace (even if the on screen events don't). The Supergirl theme is reprised to an exciting conclusion. Goldsmith could do worse than to include concert overtues on his albums as they make a nice medley of the major themes and sets films off to a flying start. As it were. In this case, it is nice to have the music without the dreaded synth effects. Sadly, when the opening titles proper appear, the synths are plugged in and various whooshes and synthetic swirls start to appear. Actually, mixed with the main theme they work reasonably well. It is only later on in the score when their use has become tiresome do you wish Jerry would rely on the massive acoustic forces which has in his control.

The Argo City music isn't as imposing or well developed as Williams stunning music for the earlier sequences and the omnipresent pulsing synths don't help much either. The music only starts to really get going with the Flying Ballet, which is a lovely lyrical workout of the Supergirl theme, backed with swirling strings and is a highlight of the score (as flying sequences often seem to be). Many of the tracks additional to the original Varese release are often not terribly exciting, but Silva Screen must be complimented on their attempt toward completism. The action cues on the score are not really some of Goldsmith's best and tend toward the somewhat simplistic. I wonder if this is a result of the leitmotif approach, which Goldsmith doesn't employ all that often. He tends to repeat the themes just that little too often and the effect is occasionally grating. However, the drama is still intact and whatever they lack in technical acumen, they make up for in typical Goldsmithian bravura.

The Phantom Zone Music is appropriately mysterious, but the effect is mostly garnered from the synths and not by ingenious use of orchestral techniques (as Goldsmith is well capable of doing). The climactic showdown between good and evil (this film, is in no way cliched at all, not at all...) is long and somewhat meandering, but when it finally does seem to resolve, it builds nicely toward the end credit recapitulation of the main themes. The Final Showdown intermingles the Supergirl main theme and the Monster themes quite well and although the overall effect is somewhat diffuse, is much more exciting and cohesive than some of the other action sequences in. The victory is a bold statement of the Supergirl theme and is certainly a relief when it appears after all the growling music that has gone before it.

Not really a favourite of many Goldsmith fans; over-reliance on somewhat tacky synths and a somewhat rambling structure just doens't cut it with the more discerning Goldsmith fan. However, this is certainly a lot better than it might have been and as imitation John Williams, is still good entertainment on its own terms. A shorter release on Varese, that is something of a collector's item (although I have no idea why) apparently contains all the best sections of the score and reduces the level the synths are mixed at. However, as most people feel that the more music the better, this is almost certainly the best option.