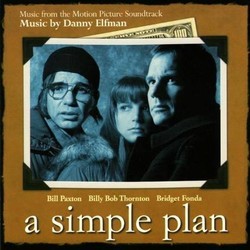 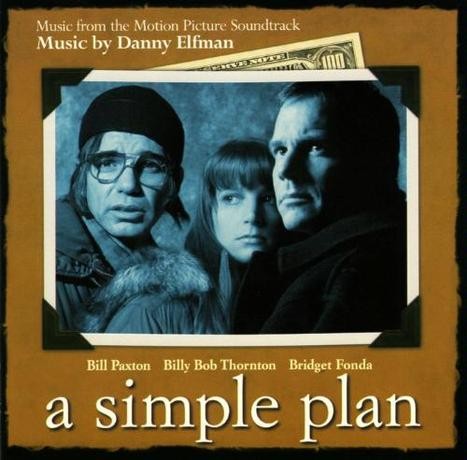 A Simple Plan - 06/10 - Review of Tom Daish, submitted at 2010-09-10 23:47:34
From the opening descending motif player on extremely honky tonk piano, you are assured of being in for something decidedly off beat. This seems to be a feature of Danny Elfman's recent work; to experiment with very unusual orchestration and sometimes un-melodic and peculiar sound worlds, even more so than his already unusual style. While there is no main theme, per se, well not one that you're liable to be humming any time after having listened. His tendency for Herrmann-isms isn't so much mirrored in the actual music, but in the actual orchestration, which in the best tradition of out of this world Herrmann features no brass and as far as I can tell, only a large collection of flutes for the woodwind. Add to this the out of tune pianos, strings and the occasional Thomas Newman-like twinkling percussion, it adds up to a peculiar listen. In tone it reminds me a great deal of Carter Burwell's music to Fargo, in that it is cold and alienating and nothing like a warm melody is ever expressed, but unlike Burwell's music, this is much less traditionally structured.

The sequencing of the album means that the shorter cues do tend to rather meander about and don't add a great deal and only when you get to some of the longer set pieces does some kind of development of ideas happen, most notably in Betrayal Part 1, Tracks in the Snow and Death. The second of these building from some sublimely beautiful string passages into Planet of the Apes style piano rumblings interpolated with eerie string, the flutes (of all pitches) make a notable contribution producing one of the most peculiar action cues I've heard in a very long while.

It is difficult to make a great deal of comment since it's not something that can be adequately described, I couldn't really put down a precedent in terms of scoring since even though there are minor similarities with some sections of Good Will Hunting, that score is much warmer and mystical (although a subtle reference to Morricone's theme from The Mission appears in Death, which is most peculiar). Elfman fans will likely lap it up, more casual listeners will possibly find it too disturbing an experience to want to invest in, but it's certainly an experience. I must admit that I do kind of wish that Elfman would do something a little bit similar to his Batman kind of scoring and produce something just a little more melodic, but until something like that comes along, he'll almost certainly impress some with his innovation while leaving others out in the cold.