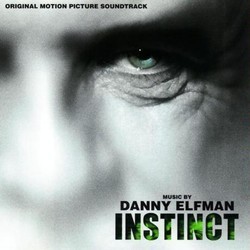 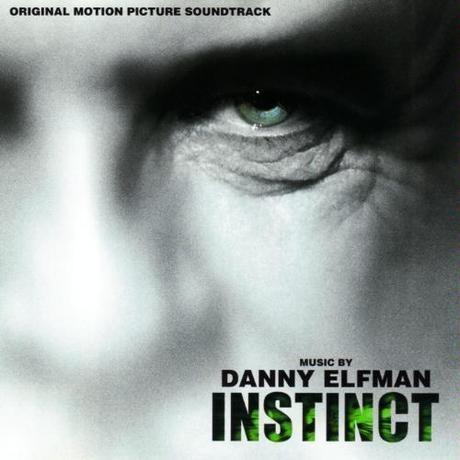 Instinct - 08/10 - Review of Tom Daish, submitted at 2010-09-10 23:41:10
Danny Elfman's recent change in musical style from the strongly dynamic gothic and/or quirky to the just plain quirky and experimental has resulted in some fascinating scores, most notably of these his odd, but deeply evocative score for A Simple Plan. With Instinct we are on slightly more melodic and steadier ground, even if there are quite a few outlandish passages. There have been many jungle based efforts of recent years, Congo, Mighty Joe Young, Jurassic Park, Medicine Man to name but a few and with Instinct, Danny Elfman enters his evocation of the jungle. It actually works very well, retaining some of Elfman's recent mannerisms as well as that heavenly choir based spiritual side that Hollywood composers love to inject into movies featuring the jungle. The Main Title starts firmly in Good Will Hunting, atmospheric percussion mode but this soon bursts into a lush choral statement of the main theme. While it's not the strongest theme, it does give the score a stronger identity than some of the more aimless sections of recent scores. Into the Wild is perhaps the centrepiece track, an extension of the choral music from the opening track and bears favourable comparison with the best parts of Goldsmith's best jungle effort, Medicine Man while still retaining that very distinctive Elfman choral aesthetic. The fairly predictable backing of native sounding percussion is par for the course, but works well in context and in combination leads to some gorgeous passages. Back to the Forest features less choir, but some lovely passages for brass and high strings as well as some lighter moments which counteract the later orchestral violence.

While all this Garden of Eden style choral stuff works well for the sanitized view of the jungle, but the film essentially hinges on a man who's lived with gorillas and this makes him go a bit ga-ga. Anthony Hopkins doing his tempramental old codger thing and featuring Cuba Gooding Jnr as his sane counterfoil. If it sounds a bit like Gorillas in the Mist crossed with Silence of the Lambs then it's proably because it is, but still, back to the music. Everybody Goes is where the music (and film presumably) takes a slightly darker turn, but it is not until The Killing does Elfman throw out a whole barrage of orchestral violence, even if it does start with several more ethereal choral and piano passages. Then, halfway through when you thought the entire score was going to be as if Elfman had somehow accidentally scored What Dreams May Come, the onslaught of frantic percussion and brass is quite a shock. The orchestration almost matches that of Elliot Goldenthal in its intricate and complex nature. On careful and repeated listen, the main performers are highlighted by high woodwind and string runs as well as just hints of other parts in the dense orchestral texture. The music does calm down before the end of the track, but it is still deeply unsettled and the score remaining score is never quite so easy to listen. The Riot cuts straight to the chase with some more fantastically complex brass and percussion writing. Despite its title, Escape is not a frenetic action cue, but one that slowly liberates the music from the darker material back to the euphoria of the earlier cues. The End Credits start of ominously, but slowly become more instrospective with piano against flute and pizzicato strings with the choir appearing with a brief phrase or cadence. A coda is provided with delicate strings and light percussion and proves a fitting end to a dynamic, but ultimately intimate score and film.

I wouldn't like to call this a return to form since Danny Elfman never lost his touch, he just writes music that isn't quite as album friendly as it used to be. However, the lengthier than usual cues and slightly more 'normal' style do make Instinct one of his most enjoyable albums in a few years. While the very dissonent and violent parts might be hard to swallow, they make for a nice counter balance to the occasionally spine tingling choral music. I would suggest that its his best use of choir since Edward Scissorhands and almost certainly his most enjoyable album since Mission: Impossible.