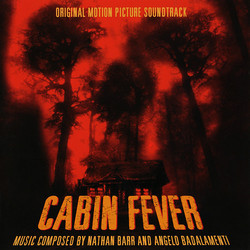 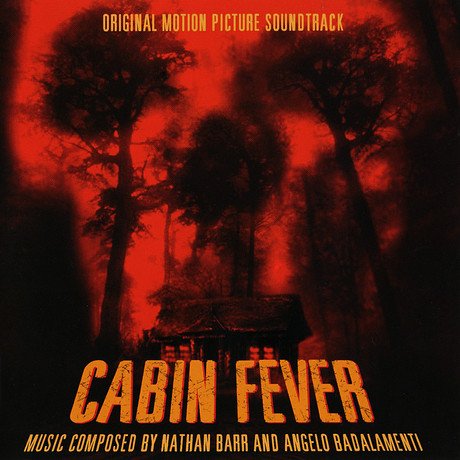 Cabin Fever - 03/10 - Review of Tom Daish, submitted at 2010-09-07 22:09:40
My first thought when I saw the title Cabin Fever was of the hilarious song from Muppet Treasure Island. My mind works in mysterious ways. To be honest, 76 minutes and 32 minutes of that song repeated over and over would likely be a greater listening pleasure than this horror score by Nathan Barr (probably most famous for being an assistant to Hans Zimmer) and the somewhat better known Angelo Badalamenti. The film is about a flesh eating virus (apparently based on real ones) that ends with the victim bleeding all over, leading to hideous death. Yes, that does sound like a lot of fun. Of course, because it's teenagers trapped in a cabin (hence the title), they all do copious amounts of bonking too. Horror scores are difficult to enjoy at the best of times, but the music is evidently on a budget and receiving such a long album seriously hampers any chance Cabin Fever has of being enjoyable. This is not to say it's devoid of some merit, but it's largely synthetic, meandering and often deathly dull.
The disc opens with a brief dialogue clip - the first of a few, but they are kept before and after the body of the score, although in this instance, the slightly weird dialogue is darkly funny and would likely perk the disc up a touch. After that, there are a few songs which are quite amusing and likely included in the film for comedy value than anything else. From track 7, we then have about 52 minutes of score, most of which is long string notes - low and eerie or high and eerie - or long synth notes, occasionally perked up with a bit of percussion. What is most frustrating is that a few tracks are surprisingly imaginative, for example, Die Redneck Die (The Redneck The - for Simpsons fans) which has a kind of sampled scream that has been manipulated and it's that kind of thing that works well. Those with a more continuous sense of movement - Grim's Gave, for example - are a good example of scoring with a chamber ensemble, proving you can build up momentum and excitement without a 100 piece orchestra. Unfortunately, it's the dozens of other tracks that prove that you can't, at least not without being a little more imaginative.

Many of the tracks are simply based on long notes, with the occasional stabbing cello or double bass notes to inject a little edginess. As a low budget horror score, it's functional and likely extremely effective in the film. At least it avoids being overwhelming and irritating, but as pure music, too much of it is just plain tedious. I can't even claim that there's a good half hour album in there as even cutting out all the least interesting tracks probably wouldn't leave that much. It pains me to say it (and I'm probably close to film music heresy), this might have been better as a song album with a 10 minute suite of the score at the end. With dialogue clips. Still, the back cover has a picture of a man in a rabbit costume with a pile of pancakes in one hand and a syringe in the other, standing over a blond girl. What more could you want?
La-La Land Records proudly presents the Original Motion Picture Soundtrack to the highly anticipated, wildly acclaimed Lions Gate Films theatrical release CABIN FEVER.

Composers Nathan Barr (BEYOND THE MAT, FROM DUSK �TILL DAWN 3) and the legendary Angelo Badalamenti (TWIN PEAKS, BLUE VELVET, SECRETARY) ratchet horror up to a whole new level with their mesmerizing, nerve-jangling score.>CD also features SONGS from the film by Scrappy Hamilton, Your Mom, Happy Wednesday, and The Turtlenecks.>Includes special BONUS TRACKS from AngeloBadalamenti!

To find out more about the movie, visit the film's official site www.cabinfevermovie.com