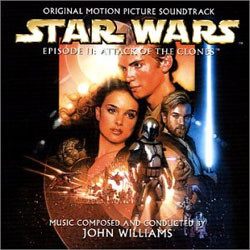 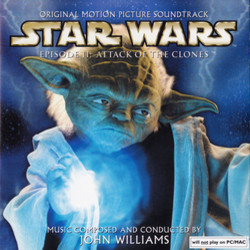 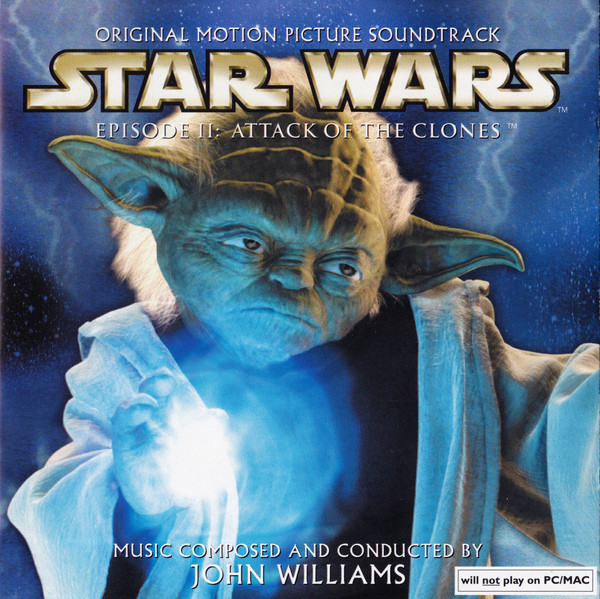 Show reviews in other languages
Star Wars Episode II: Attack of the Clones - 10/10 - Review of Tom Daish, submitted at 2010-10-02 13:30:25
After the crushing disappointment (as a film at least) that was The Phantom Menace here we are with the middle chapter of Anakin Skywalker's descent into darkness. The film itself promises to be more adult than the first prequel before things turn really nasty in Episode 3 when the bad guys come out on top. John Williams' first Star Wars prequel score didn't really survive terribly well in any format. The double CD was horribly edited and, well, so was the single CD, but at least was edited for what Williams perceived as the best musical experience rather than as it was in the film. It would seem that Attack of the Clones is more faithful to the film, but only viewing the film will assure most fans.

Unlike The Phantom Menace, Attack of the Clones boasts only one major new theme, the much vaunted love theme, Across the Stars (almost as naff a name as the film's own subtitle if you ask me). Williams, either through design or by default, has written a melody which to me at least, sounds like a mixture of The Force Theme (noble, minor key), Leia's theme (similar melody, but minor key) and a hint of Luke and Leia's theme in the end of the opening phrase. Obviously it doesn't copy any of these, but the connection is there. It is a very grand, but doomed Romeo and Juliet type effort which lacks the subtlety of the original character theme concert arrangements, with broad orchestration, lots of strings and horns playing together and not a lot of interesting counterpoint, although the turbulent middle section drives home the troubled aspect of the romance quite nicely.

The love theme doesn't quite dominate the score, but certainly crops up plenty of times, although given the concert arrangement reaches epic proportions quite early on, the impact of grander performances is somewhat lessened. There is no Carbon Freeze style blow out which the melody builds to throughout the score. Although Duel of the Fates was pretty aggressive, its impact was severely compromised by the choppy editing. It makes a token appearance during Return to Tatooine (rather a blink and you'll miss it type affair), but the action this time is aggressive, orchestra only. Things kick off in fine style with the chaotic, modernistic Zam the Assassin which does slightly lack the direction of earlier Star Wars action, but the sheer bravura of the writing and performance keep the tension sustained impressively. The much discussed electric guitar doesn't appeal to me at all since it really adds nothing to the texture and simply drowns out a few seconds of orchestra and percussion. However, the Tan Dun style minimalist percussion is a successful addition that which occasional leaves a solo percussion part as the orchestra darts in and out.

One of my biggest Phantom Menace gripes is that the quiet moments were simply tedious, fortunately Attack of the Clones has generally more pro-active scoring for dialogue scenes. I still get the feeling that Williams is attempting to avoid these parts being too thematic - fear of theme overdose perhaps - but they still move along and remain more engaging than before, even if they still aren't as interesting as one feels they ought to be. One particular highlight is Yoda and the Younglings featuring the loan appearance of Yoda's theme then a gentle choral passage that rather suggests the calmer parts of Barry's Lion in Winter, but still doesn't seem out of place.

The lengthy finale cues are hugely entertaining. The Arena is built around a march that is a great variation on the Trade Federation march from The Phantom Menace. It seems to be turning into an action cue, about to break into something less rigorous, but always pulls back to the main melody. Confrontation with Count Dooku sounds like a bit of an edit job with a marvellous high end choir and full orchestra motif to start out that turns into an ethereal soprano solo and then a full on burst of The Imperial March which to me, sounds curiously out of place. It isn't helped by being brief and then being followed by a brief return of the love theme before the end credits suite. It just seems too quick to be the actual final music from the film and certainly doesn't sound to be building up to the end credits which really just start with almost no warning, even if the edit from the love theme is perfectly acceptable.

The end credits are somewhat better thought out than The Phantom Menace's straight performance of the two concert arrangements, although the join from the main theme to the love theme isn't especially inspired. However, the brief quote of Anakin's theme then a double bass hint of the Imperial March to end is a nice touch. There are various different versions, but the European one contains an extra track, On the Conveyor Belt, a brief, but entertaining action cue. Some US versions contain CD-Rom extras and some the extra track, but don't play on CD-Roms at all in a copy protection scheme that seems to have annoyed many people. Oh, and there are several different covers. Shop around for what you want is the best advice really.

It lacks the dominant highlights of The Phantom Menace, but is a more consistent listen over all. I suspect only Howard Shore's effort for the second installment of Lord of the Rings will be better received in 2002, this is Williams doing Star Wars and while (for me at least) still not a patch on the originals, undoubtedly some of the best modern film scoring. I think we have to accept the fact that Williams' writing has evolved and he'll never write like in the good old days, but for his modern method, Attack of the Clones is a superb achievement. It is not as obvious thematic as its predecessors, but careful listening pays dividends although the numerous action highlights will thrill from the first listen. Another cracking Williams effort.
Star Wars Episode II: Attack of the Clones - 08/10 - Review of Andreas Lindahl, submitted at 2008-01-20 21:25:40
Star Wars returns and so does John Williams, of course. Although not as hyped as The Phantom Menace, the composers' score for Attack of the Clones has been awaited by many. So, how is it, then? Well, Williams certainly knows how to write his Star Wars music by now - the score for Attack of the Clones being the fifth. It's a genuine Star Wars score, complete with lots of brass fanfares, high, swirling piccolo flutes and exciting action writing. But compared to Williams' score for The Phantom Menace, the Attack of the Clones score is a little weaker. Or rather, it's not as entertaining as The Phantom Menace, but it is still a darn fine score.

The Phantom Menace had the mighty choir piece Duel of the Fates. Attack of the Clones, on the other hand, comes with an absolutely stunning love theme for Anakin Skywalker and Padme Amidala. It's allowed to shine in the second track on the CD, and boy does it shine! When compared to other themes and scores by Williams' this theme is like a cross between Hook and Nixon. Very lush with thick strings and brass and some typical Williams sounding harp arpeggios. Very romantic, as it should be since it is a love theme, but also quite sad and tragic. Apart from the extensive treatment it gets in the concert version it also shows up on many other occasions in the score, such as in "Anakin and Padme", "The Meadow Picnic" and "Love Pledge and the Arena", making Attack of the Clones the most romantic Star Wars score so far.

As for other themes, Attack of the Clones does not present anything new that's really worth remembering. The score, and the soundtrack CD does of course open and close with the classical fanfare, but that's all we get to hear of that well known little ditty. Duel of the Fates shows up a couple of times, although rather brief, and the same goes for the Imperial March. Joda's Theme is heard in "Yoda and the Younglings" and hints of Anakin's Theme (and the Imperial March) from The Phantom Menace closes the score, similar to the way Williams ended The Phantom Menace. But that's it really. I really think that Williams could, and should, have used the themes presented in the previous four films a little more. But what do I know really...? And who knows... maybe these cues have been left off the soundtrack CD?

The disc offers a nice balance between big action cues and more relaxed, laid back music. "Zam the Assassin and the Chase Through Coruscant" is an impressive eleven minute long action cue, which boasts some interesting writing for percussion. And electric guitar, unfortuntately. I say unfortunately because the sound of the electric guitar really doesn't mix well with the symphony orchestra. Especially not when the orchestra in question is performing Star Wars music. However, the guitar is only used in a couple of bars and the track is still one of the best the CD and the score have to offer. Ecqually good, or perhaps even better, is the action part of "Love Pledge and the Arena", an eight minute track that features some excellent and typical Star Wars music. "The Meadow Picnic", on the other hand, is very sweet and innocent, as is "Yoda and the Younglings" with its beautiful choir in the style of Hook.

All in all, Attack of the Clones is an excellent and solid Star Wars score by Williams. It's not a five star score - at least not like this, on a single disc as a standalone listen - but it's close. Now, I suppose the question everyone is thinking is "when will we get the complete score released, a la The Phantom Menace?"
World Soundtrack Awards: Best Original Soundtrack of the Year (Nominee)

Soundtracks from the collection: Star Wars