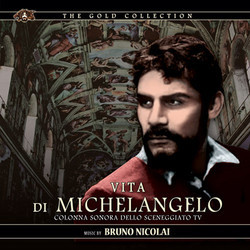 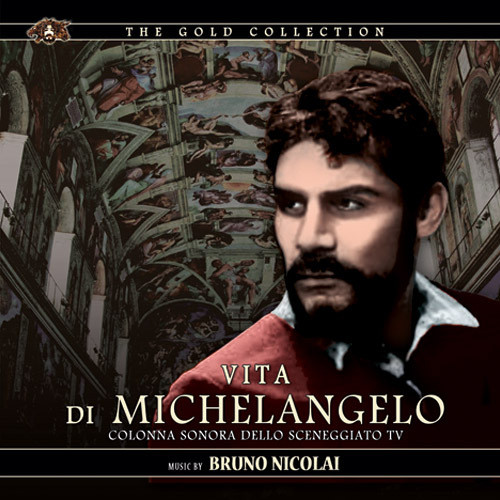 Vita Di Michelangelo - 09/10 - Review of John Mansell, submitted at 2014-03-16 12:25:16
Kronos records have in a relatively short period of time established themselves as purveyors of quality soundtrack releases, plus they have in recent months entered into a partnership with another well respected record label Movie Score Media who like Kronos are committed to the release of quality products and strive to bring to the attention of the film music collecting community new and exciting music from near unknown composers and also established ones as well. Kronos began a special series called the GOLD COLLECTION which is a series of releases dedicated to Italian film music and they have already released a number of desirable and out of print scores within this series. LA VITA MICHELANGELO is among the next batch of releases, a TV series from 1964, the score by Bruno Nicolai, was previously released on long playing record on Bruno Nicolai’s own label EDI-PAN which contained 21 tracks, which are featured here in the same order as the original vinyl. Plus for this CD edition, Kronos have unearthed another 33 minutes of music from the mini series that starred Gian Maria Volonte and was aired by RAI with directorial duties being undertaken by Silverio Blasi. The series which was aired in three episodes had actor Volonte taking the title role of the Tuscan artist, and it was a kind of dramatised documentary in many ways. The music that Nicolai penned for the series is stunning, it is almost serene sounding in places with emotive strings and triumphant brass flourishes ushering in an even more emotion laden work which in my opinion is one of Nicolai’s finest works for TV and cinema. The compact disc opens with MICHELANGELO, this is a somewhat sombre and low key opening, with subdued percussion underlined by serious but melodic sounding strings, the percussion soon melts away and the strings begin to introduce the central theme for the score, at first gently and in a somewhat fragile fashion, but after a short while it gradually begins to build to become a slow and emotive piece that is midway through joined by a gentle percussion beat, which serves as punctuation. Track number two, RUSTICA, is a pleasant and easy sounding period piece performed on woodwind and laced with feint sounding strings that add a little more depth and substance to the proceedings. Track number three, PASTORALE 1, is a charming and gently absorbing composition introduced by half heard horn and then performed by woodwind that is supported and embellished by light touches of harp and underlined by pale but affecting strings all of which create a melancholy and calming atmosphere. Track number 7, L’AURORA, is an attractive and haunting piece, the composer utilizing heart rending solo viola and slow supporting strings to introduce the composition, the viola is then replaced by a light and delicate oboe which carries the theme through to the tracks conclusion enhanced by harp and passive strings.


Track number eight, Savonarola, is an imposing church organ led cue, with muted brass adding their weight and creating an almost majestic and majestic feel to the composition. At times it is very easy to forget that one is listening to Bruno Nicolai, because the composer achieves a style and a sound that is very reminiscent of Miklos Rozsa and in particular his epic score for BEN HUR, the composer bringing into the equation, grand sounding brass, sweeping strings and rumbling percussion, this is particularly evident in track number twelve I DANNATI which is a triumphant and jubilant celebratory composition, filled with power, emotion and has to it an lavish and lush persona. This style of scoring reasserts itself on a number of occasions within the score and at times the LOVE THEME from BEN HUR or the fragile and emotive THE MOTHERS LOVE theme is brought to mind. The score also has certain affiliations with the style of Nino Rota, but there are the unmistakable musical trademarks of Nicolai throughout making this a must have for any serious collector of Italian film music I cannot recommend this grand and impressive work highly enough.
Directed by Silverio Blasi and and scripted by Romildo Craveri and Diego Fabbri on the subject of Giorgio Prosperi was based on the life of the Italian painter Michelangelo Buonarroti, whose 400 year anniverary from his death was being celebrated at the time of production.

The program was very atypical, especially at the time it was done, being it a sort of hybrid between informative, educatonal documentary and a television series. Contributing to the positive outcome of the program was Maurizio Mammě's screenplay, the acting of actor Gian Maria Volonte, in the role of the Tuscan artist, and last but not least VITA DI MICHELANGELO boasted a truly rich and highly variated score by the much respected Maestro BRUNO NICOLAI.

The first 21 tracks of this soundtrack are the exact same program and recording released on vinyl on Bruno Nicolai's own record label Edipan. The remaining 15 bonus tracks (an additional 33 minutes of music) are presented for the very first time ever courtesy of the Edipan vaults and BEAT Records.

This CD is deinitely destined to quickly become a collector's item. A must for all Bruno Nicolai fans.