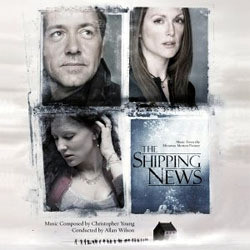 Show reviews in other languages
The Shipping News - 08/10 - Review of Andreas Lindahl, submitted at 2008-01-20 21:25:40
Many were probably surprised, but also delighted, when it was announced that composer Christopher Young, instead of Rachel Portman, had been hired to write the musical score for Swedish director Lasse Hallström's film adaption of Annie Proulx's successful novel The Shipping News. With Portman having scored the directors' two previous films, The Cider House Rules and Chocolat (both Academy Award nominated for Best Score), Hallström probably felt that it was time to go for a different sound than Portmans' excellent, but also predictable, sound.

And even if the actual film hasn't received the amount of praise that Miramax hoped for, Christopher Youngs' score has. It got nominated for a Golden Globe (and should have been nominated for an Academy Award as well, but unfortunately wasn't) and has been praised by reviewers (there are exceptions, of course...) and rightly so. Youngs' score is a delight. It can be summed up with one word. Celtic. Now this doesn't mean a tin whistle and occasional uilleann pipes together with a traditional symphony orchestra, which often is the case when it comes to quasi-Celtic music written for Hollywood films. Sure, the tin whistle and the uilleann pipes (allowed to really shine in the lively "Dutsi Jig") are there, of course, but Young also makes use of a large array of other Celtic instruments, such as bodhran drums, celtic harp, psalteries, fiddle and hurdy gurdy.

The main theme is a beauty. Lush, sweeping renditions of it bookends the score, performed by whistle and strings supported by bodhran drums and other percussive instruments in the opening "Shipping News" and the really beautiful "Sail On", but it also shows up in many other cues, as well. There's also an upbeat theme heard for the first time in the second track, "The Gammy Bird" and a slow, relaxed theme heard in "One Kite Better" (performed on guitar) and other cues. Add a couple of other memorable themes and you get a lovely score that fans of Celtic music and great music in general without doubt will enjoy.

The Shipping News is also the first release by Miramix new record label, appropriately titled Miramax Records. However, if all of the labels' future releases will be handled the same way as The Shipping News - with the release date pushed back several times, I think it's safe to say that Miramix Records won't be around that long. Certainly not a good way to start a business. However, since Miramax are known to really promote their films for the Academy Awards and other large awards, the major review web sites were provided with For Your Concideration promos manufactured for the members of the AMPAS. The official release will have the exact same music as the promotional copy so don't spend too much money hunting down a copy on Ebay. But be sure to pick up the soundtrack.
Golden Globes: Best Original Score (Nominee)

All the King's Men (Trailer)