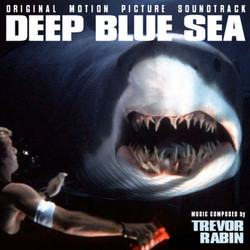 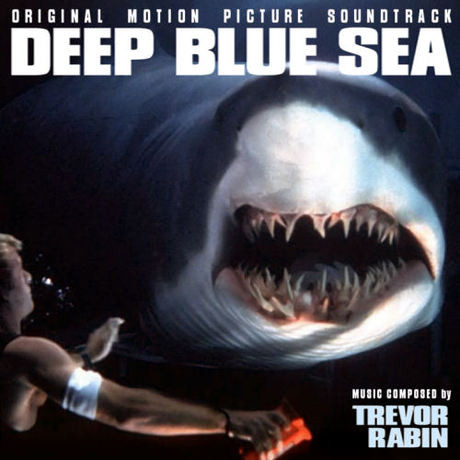 Show reviews in other languages
Deep Blue Sea - 04/10 - Review of Tom Daish, submitted at 2010-10-08 22:14:31
You have to worry about a score where the composer explicitly thanks his speakers and Korg Keyboard on the packaging of the album. I suspect he was obliged to by the respective companies, but it does make one consider the role of synthetic aids (not to mention orchestrators who seem to do more and more work in actually fleshing out the music than they ever used to) for writing scores these days. I find it somewhat surprising that some people were beside themselves with happiness when they discovered Trevor Rabin was scoring Rennie Harlin's enjoyable, scary and often very amusing shark thriller. I can't honestly say that I noticed the music much in the film, Harlin's directing seemed to keep the suspense going and the music merely mirrored it. This is not to suggest that Steven Spielberg couldn't sustain the suspense in Jaws; Williams' classic score suggested the shark due to limitations on how much of the creature could be shown. Here, Harlin can of course show the sharks much and often, but still makes them pretty terrifying even if the enclosed shadowy corridors are more akin to Aliens than Jaws.

As all the best scores do, this album starts with the finale, Aftermath which is a fairly lame variant on Rabin's 'stirring' anthem from Armageddon. It actually sounds more like sub-standard Randy Edelman trying to do heroic, but just coming off as vacuous. For better or worse, Rabin's skills as a rock guitarist at least allowed him to add guitars to Armageddon to give some identity, here it's stripped backed to an insipid mixture of synths, orchestra and choir - the latter an addition bound to perk up even the most lame material, which it does, just about. The first few tracks repeat Rabin's main theme and only during the end of Journey does any kind of action come through. Journey does actually have a few promising moments and even though it's huge overkill dramatically, with the banging and crashing along with choral additions suggesting a couple of good ideas trying to escape. However, the blasting of percussion and over the top orchestral thrashing overtake any kind of sensibility and simply reduce the music to its most purile level of fast and loud equals action and loud sometimes equals suspense and slow equals noble. Perhaps the only genuinely effective shock moment occurs in Experiment which after a slow build is cut through with a shrill outburst - not very original I grant you, but effective none the less. That particular scene in the film was actually fairly shocking on its own, but Rabin actually seems to have captured the terror for that fleeting moment.

While not an unremitting disaster, action/horror scores cannot simply rely on visceral impact alone and unfortunately Rabin simply throws everything he can think of into the mix. Although James Horner's Aliens score was pretty over the top, his technique and bravura orchestration were exemplary and cues had a sense of direction and purpose, something which Deep Blue Sea is sorely lacking. For an action score, it is depressing to note that the most interesting idea is during Hunting in Packs which isn't action at all, but a pseudo Vangelis-Philip Glass ethereal cue with synth/sampled whale song. Even then, the whalesong idea was used by Jerry Goldsmith in his admittedly pretty unexciting score to Leviathon - which was a dreadful film and didn't get a particularly outstanding Goldsmith score. At least Rabin has a half decent thriller, it's just a shame he just doesn't know what to do with it. If Jerry had scored this and Rabin Leviathon, they would have got films worthy of their talents. Not a disappointing score, just one that was as below mediocre as expected.
Deep Blue Sea - 08/10 - Review of Jason FLZ, submitted at 2010-11-16 01:30:44
Trevor Rabin is a relatively unknown composer in the major Film Music world. Aside from a few hits, his media ventures style writing keep him mostly in the shadows. With Deep Blue Sea, however, Rabin was able to break some new ground in his career. For a film as ridiculous as DBS is, Rabin's score was surprisingly serious and strong. So what are the groups of people who will like this score and who won't? What are the pros and cons? Read and find out.

Pros: DBS probably holds some of Rabins better themes. The opening 'Aftermath' is a soaring theme that mixes in some nice vocals while combining great orchestrations. While not wholly original it still sounds great. 'Susan Softens', the latter half of 'Jim Returns', and 'Doctor's Orders' also show some nice use of the piano and hold the softer side of the album. One of the highlights of the album is 'Journey', where a soaring theme and dramatic theme intertwine while being supplemented by guitars. One of the great pros as well (of the album) is the use of action music (especially in 'Anarchy', the stand out track). While not the most original it definitely adds onto the texture of the score. The catchy 2 note motif introduced in 'Main' is also a pro in itself.

Cons: One con in Rabin's music is his lack of originality. Haters of thrashing electronic music or stereotypical heroic music in the vein of Zimmer will dislike this score. Some tracks happen to also pander on and never feel like they go anywhere. One of my biggest complaints of the album happens to go back to Rabin's themes. Some of these melodies get no more than 2 appearances on the album and feel highly underdeveloped.

Overall this is probably Rabin's top score. Since Jaws, this can be considered the second most effective score for a shark/horror film. The people who like this will be the groups who aren't afraid of a little thrashing score with some great themes interspersed. The people who won't are those who prefer more orchestral music for this genre.
Deep Blue Sea - 06/10 - Review of Andreas Lindahl, submitted at 2008-01-20 21:25:40
Guitar player and former member of Yes, Trevor Rabin, got himself a decent group of fans with the score for Armageddon in 1998. Since then we have heard nothing from Rabin, until now, with his score for Renny Arlin's Deep Blue Sea, starring Samuel L. Jackson and Stellan Skarsgĺrd, among others.

Opening with a piano solo, with the reverb turned up to max, that could be taken directly from Armageddon, one wonders if this will be yet another action score, heavy on synths. And when the main theme is presented shortly thereafter, I am startening to think that we perhaps will be given an alternate version of the Armageddon score. But, no need to worry, Rabin luckily manages to create a unique sounding score.

The music is much more orchestral than Armageddon, meaning almost no loud synths and eletronical percussion. I say almost, because there are some parts where the synths and drums take over the entire stage. Still, if Armageddon was a classic Media Venture action score, Deep Blue Sea is more of a traditional action score.

The orchestral sound is pretty big and Rabin adds a choir to make the music even more exciting and powerful. But the score never manages to create something special and fresh. There are a few highlights, such as the choral parts, but all in all, this score fails to deliver. The Varčse Sarabande release is just over 30 minutes in length, making it one of the labels' very shortest releases.