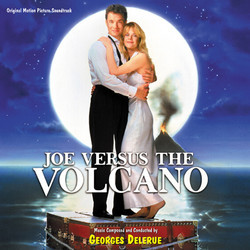 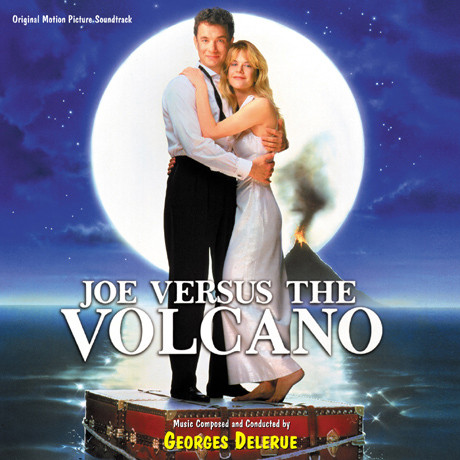 Joe Versus the Volcano - 08/10 - Review of Tom Daish, submitted at 2010-09-13 22:23:04
There are some scores that are requested time and time again to be released, re-released or re-recorded and somewhere at the top of that list is - or rather was - Georges Delerue's Joe Versus the Volcano. It is fortunate for us that Robert Townson is one of the late composer's most ardent supporters and has finally made our dreams come true with this limited edition release from Masters Film Music (aka The Varese CD Club). We can banish the painful memories of the dire sounding bootleg and listen to Delerue's gorgeous score in all its glory.
The one critical fixation one can make on Delerue is that he seems to write more gorgeous themes in one score than most composers manage in an entire career. Before Marc Shaiman or Alan Silvestri got their all into the romantic and fluffy, Delerue was already there doing it in fine style. Don't get me wrong, both composers have written some fine scores and lovely melodies, but I doubt they'll come close to matching the dozens of instantly memorable and utterly enthralling melodies that Delerue wrote. Even though it was written near the end of his life, the main themes for Joe Versus the Volcano are still as fresh as ever. The main theme is prototypical Delerue, a sweeping string melody written with that unmistakable dense string orchestration. The other - which is officially the love theme - is a little more gentle, but no less charming. In the end credits it's turned into Marooned Without You, with a swooning female chorus. It sounds awful, but it's a delight.

A third little melody opens the score in the brief Once Upon a Time, a sweet music box lullaby. This gives way to the more brooding Brain Cloud which sets up the story. The first half is generally quite restrained, with modest statements of the main themes, although a joyous little fanfare accompanies New York and a more upbeat rendition of the love theme features during Shopping Spree. The latter, with its OTT sax solo is a bit naff in fairness, for a moment taking away from the timelessness of the remainder and placing it somewhat squarely in the mid 1980's (although the film was actually released in 1990). For The Storm and The Rescue, Delerue goes for a bit of old fashioned melodrama with much swirling strings and heavy brass. From this point, the dramatic highpoint of the film is reached as Joe faces the Volcano.

A brief and bizarre interlude of Hawaiian chorus intone Hava Nagila and When Johnny Comes Marching Home, followed by the deus ex machina finale, scored in typically heart on sleeve style. The End Credits sum up the main themes, including the aforementioned choral version of the Love Theme. It is a surprise that this wasn't recorded for the London Sessions albums. Anyone not wearing a smile after listening to this score really has to be a little hard hearted. As with most Delerue, it is not cutting edge composition, but his exuberant dramatic and romantic sense is tangible in every bar. The euphoric liner notes by Robert Townson give a good appreciation of the music and notes on some sections (pleasingly none of the most important cues) that were ultimately replaced by pop songs in the film. Liable to be sold out in no time, this is a score that belongs in everyone's collection, wonderful.

Other releases of Joe Versus the Volcano (1990):