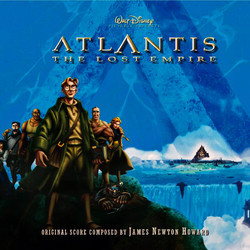 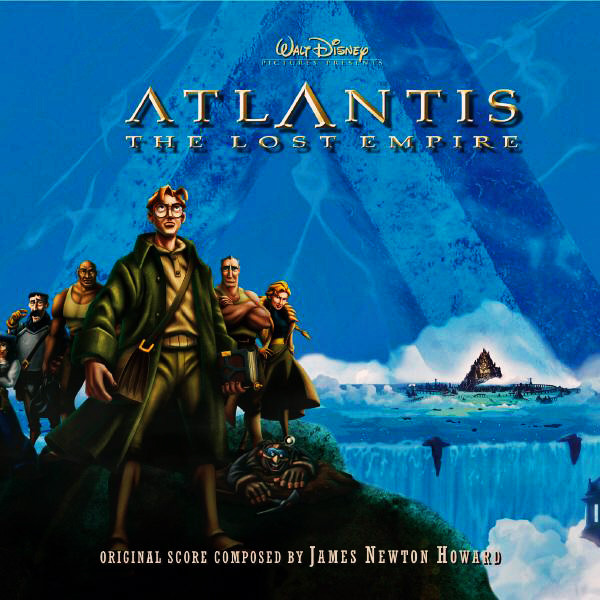 Show reviews in other languages
Atlantis: The Lost Empire - 08/10 - Review of Adam Andersson, submitted at 2008-01-20 21:25:40
It seems like Disney films are a great inspiration for many composers, since these animated motion pictures often shows up with some of the best scores. Hans Zimmer’s excellent The Lion King, Alan Menken’s The Beauty and the Beast, and James Newton Howard’s Dinosaur are only a mere scratch on the surface of what the Disney films have given us in the field of scores. Disney has also hired a lot of different composers over the years – Menken, Zimmer, Jerry Goldsmith, Nick Glennie-Smith… just to mention a few. And now, with James Newton Howard, it seems like Disney have reached higher than ever before. Earlier, Disney films have often been some kind of half-musicals, with a lot of musical numbers with singing and dancing and whatever. But in the newer films the songs are gone and the music has only the role of accompanying the action on screen. That is just the case with Atlantis: The Lost Empire. If you heard it without knowing it’s a Disney score, you would hardly guess that it is. This is grand and emotional scoring at its best.

After the fantastic score for Dinosaur, I must say I expected a lot from Howard this time. And although he does not really reprise the excellence of Dinosaur it is close. And personally, there are pieces of Atlantis that I like better than Dinosaur, even if Dinosaur overall is the better score. No doubt about that. But, as I said, this comes very close. Atlantis is a rousing, beautiful, mystic and sweeping score, that will take you on an otherworldly musical journey.

The score can be clearly divided in two rather different parts, the music before and after the lost city of Atlantis has been found. The difference between these two is so big that they almost can be taken for two separate scores. The first half (tracks 2-8) is an ordinary bombastic action score, with the usual comic twist since it is a Disney movie, while the second part of the score is deep, mystic, sweeping and lyrical rather than bombastic or even Disney-like at all.

The score opens with “The Submarine” (the CD opens with a pop song performed by Mya – haven’t listened to it, and couldn’t care less about it), a rather Williams-like, brassy cue. The track ends with thick brass and wordless chorus with such power that it almost blows you away – this is really to begin on a high note. The theme established in “The Submarine” returns regularly in the first half of the score in different forms, most notably in the middle of the heavy action in “The Leviathan” and as a rousing march in “The Journey”. In the fourth CD track, the third score track, “Atlantis is Waiting”, one of the score’s main themes is presented - a beautiful and emotional melody performed by strings, horn, clarinet and oboe in turns, used throughout the whole score. This theme, supposedly a theme for the main character Milo, is also featured as a beautiful rendering by guitar in “Bedding Down” - a quiet interlude in the rather heavy first half of the score. This theme and the “submarine theme” is the only themes in the first half of the score, but in the latter half, a couple of other themes and motifs are introduced, among them a full-bodied melody, supposedly representing Atlantis itself.

All in all the first half of the score is a good piece of music, but it is nothing sensational. The action music is, as usual with James Newton Howard, filled with heavy brass and choir, and a lot of short quotations of the themes in the midst of action. The calmer music is rather Williams-like, with playful brass and woodwinds. It is a good, and entertaining listen, but nothing you haven’t heard before.

The originality in Atlantis: The Lost Empire, and by far the best part of the score, is the second half. It stands clear right at the beginning of track 9, “Milo meets Kida”, that a considerable change is apparent. Ethnic percussion, chanting female vocals, and mallets such as vibraphone and marimba enters the scene and gives the music a totally different mood. In the other half the choir is given much more space, often as the main element of the music, and the percussive effects is what carries the music. This all comes together to make a great listening experience of an otherworldly character, which really is something that you haven’t heard much of before.

Highlights are “The City of Atlantis” and “Touring the City”, with their rich performances by choir and percussion, and “The Chrystal Chamber”, arguably the score’s best track, with full treatments of many of the themes, and all the main elements of the score: chanting vocals, powerful choir performances and the mystical/ethnic percussion. Much of the music is rather quiet, with prominent solo writing, especially for woodwinds. The bombast of the first half also returns briefly in “The King Dies/Going After Rourke” and “Just Do It”, but this time merged together with the mystical character that makes Atlantis a score worthy of remembrance. Finally, the score is rounded off in “Atlantis” with renditions of the themes for Milo and Atlantis in full orchestral and choral glory.

I would definitely rate the second half of Atlantis: The Lost Empire as a five star score, but since the first half is much weaker, even if it is an enjoyable listening experience all in all, I will limit the rating to four stars. But, the second half of the score, with its sheer magical power and lyricism makes the score as worthy a purchase as any five star score, in my opinion. James Newton Howard here offers something completely new to animated scores, and the style of the score is noteworthy also in film music in general. The feeling of mysticism and magic in Atlantis: The Lost Empire is actually hard to describe in words – it should be experienced by each and every one. A solid effort from one of today’s masters of film music.
Atlantis: The Lost Empire - 07/10 - Review of Tom Daish, submitted at 2010-09-26 20:03:07
What do you get if you mix Randy Newman's Toy Story and Howard's own Dinosaur? The unsurprising answer is of course Atlantis. Well sort of, certainly the best broad label one could apply to James Newton Howard's latest opus. It has the grandeur of Dinosaur in many places (mainly towards the end) and the breezy Carl Stalling type flits in style of Toy Story (mainly at the beginning). As it was decided to make Atlantis a song free zone (save the end credit song, which was in truth, fairly inevitable), it seemed no great shock that Howard was employed given his success scoring Dinosaur. As mentioned, the first half of the album is a little on the disjointed side with the music skipping from idea to idea just a little too frequently. From the opening fanfare, we quickly move into light, comedic territory which gives way to a burst of drama in The Leviathan. The ideas are often fetching, but still too quickly discarded.

Once Atlantis is discovered the ideas seem to come together with considerably more coherence. The music for Kida being particularly fetching in its light, romantic way, lightly scored for strings with occasional guitar and harp. Howard even does a variation on his gorgeous swimming music from Waterworld during The Secret Swim and The Crystal Chamber, with lightly chiming percussion and wordless soprano vocals. Of course, the city itself is given more imposing ideas replete with choir, which is grander in scale than Dinosaur (and devoid of the curious African element of that score). In fact some of the spookier choral writing actually recalls Williams' underwater music from The Phantom Menace, but Howard uses it with more conviction for a more imposing sound. The action cues are great fun and that cheery type of action that is full of major key fanfares and, more curiously, a hint of Goldsmith's famous echoing trumpet motif from Patton during Going After Rourke.

Atlantis is a little frustrating as the elements are there, but it just doesn't hold up as well as Dinosaur and certainly isn't as memorable. That is not to say it isn't an enjoyable adventure score. The performance and recording are notably superb, with crisp, up front brass which is obvious from the opening fanfare of The Submarine. Where the Dream Takes You is a fairly mediocre ballad; standard issue for this type of film, but pleasant enough. Not quite the winner that Dinosaur was, but still solid entertainment with plenty of incident.
World Soundtrack Awards: Best Original Song Written for a Film: "Where The Dream Takes You" (Nominee)

Other releases of Atlantis: The Lost Empire (2001):