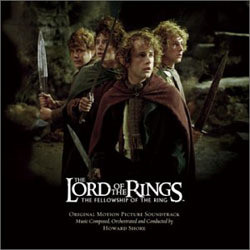 Show reviews in other languages
The Lord of the Rings: The Fellowship of the Ring - 10/10 - Review of Tom Daish, submitted at 2010-10-09 12:10:08
Of the various names bandied about as composer for Fellowship of the Ring, it was perhaps the thought of Wojiech Kilar tackling Tolkien that sounded most promising and probably the thought of James Horner the least. Maybe fifteen years ago, Horner would have been a great choice, but based on recent efforts, I rather feel it would have been another warmed over effort. Howard Shore has written an eclectic mix of scores from the often unbearable writing for David Cronenberg to the warmed over Marc Shaiman of Mrs Doubtfire to his best efforts such as the thrilling Dogma, the chilling Silence of the Lambs and the playful, but quirky Ed Wood. However, nothing has been in the same league in terms of scope as Fellowship of the Ring. He is not a composer accustomed to tackling what would traditional be regarded as epic material only worthy of a John Williams score and the fact that Fellowship of the Ring is such a triumph is quite possibly because it is something new and he poured everything into it.

Some may remember Leonard Rosenman's superb score to Ralph Bakshi's animated version of the first half of Lord of the Rings and while that contained its share of hair raising choral passages, nothing reaches the Wagnerian drama of Shore's effort. From the opening choral majesty of The Prophecy to the nerve tingling drama of The Treason of Isengard and A Knife in the Dark, one cannot fail to be thrilled. Many reviewers have commented how the choral music functions in the way Williams' Duel of the Fates does in The Phantom Menace. While Duel of the Fates is an absolutely outstanding concert piece, its appearances in the film and on the soundtrack albums didn't really drive the fabric of the underscore as a whole, whereas here Shore's choral music is absolutely integral. The orchestra(s) are obviously still important and taught brass writing is present in abundance, notable in Flight to the Ford. The pastoral string and woodwind writing is also rich and very calming.

The choir is not only a precursor of dread, but also of awe. Many Meetings has a quasi heavenly sound that still resolutely avoids being in any way insipid. It also show cases the score's dominant theme, an almost hymnal melody that brings to mind (by way of comparison) a non-Celtic Braveheart that works extremely well in supplying a quieter form of grandeur. Shore even works in some more jaunty material; Concerning Hobbits and parts of The Black Rider have a folksy quality that transcends the simplicity of the Hobbits into the complex story and musical tapestry. I know that the thought of folksy in amongst the striking drama doesn't sound promising, but it works surprisingly well.

If the thought of folksy doesn't upset someone, then the thought of Enya quite possibly might. I never realised how popular she was across the Pond, but she has almost become the sole selling point of the album. Her contributions actually mesh well with Shore's score, or as well as they can do and May it Be certainly doesn't spoil the finale (it could be worse, it could be Celine Dion). Anyone familiar with Enya won't find much new in her writing, but anything too striking would have worked against Shore's efforts so they end up being pleasant diversions in proceedings rather than huge jumps in musical narrative.

There is more effort required on the part of the listener than more 'traditional' epic scores and certainly a repeat listen or five is needed to pick up on all the melodic fragments. There are moments of instant impact, but one must listen to it several times to appreciate both the less obvious moments as well as the score as a whole. I doubt that many composers could have written anything better - although a couple of moments slightly suggest Elliot Goldenthal and given his work on Titus he might have written a superb score. However, it undoubtably stands as the pinnacle of Shore's career to date. In this instance, I suspect a double CD of more or less the complete score would be most welcome and failing that, there's always the next part of The Lord of the Rings trilogy and I for one can't wait.
Golden Globes: Best Original Score (Nominee)
Oscars: Best Original Score (Winner)
World Soundtrack Awards: Soundtrack Composer of the Year (Nominee)
World Soundtrack Awards: Best Original Soundtrack of the Year (Winner)
World Soundtrack Awards: Public Choice Award (Winner)