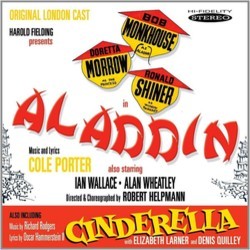 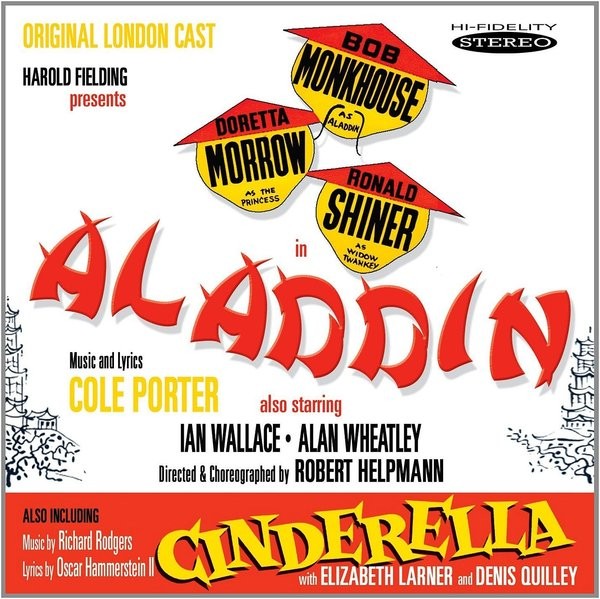 Cole Porter composed Aladdin for American television televised in February 1958. The score was to have new life breathed into it for the 1960 pantomime season in London, when Harold Fielding brought it to the stage at the Coliseum to great success. The stage production was substantially different from what had been seen onscreen. Songs were moved about; the character of the Magician was removed and his numbers were reassigned (mostly to Aladdin); and the book diverged strongly from S.J. Perelman’s teleplay, including the addition of the traditional pantomime character, Widow Twankey. Fielding’s version also added several Porter songs from other shows, including ‘There Must Be Someone for Me’ (Mexican Hayride), ‘Cherry Pies Ought to be You’ and ‘I Am Loved’ (both from Out of this World), and ‘Ridin’ High’ (Red, Hot and Blue).

The resulting cast album in stereo is a sheer pleasure to listen to, partly because the star names of the television version have been replaced by stage personalities who, some might argue, are better suited to delivering the material. Bob Monkhouse went on to become one of Britain’s most beloved entertainers, both on stage and television, but in the title role of this Aladdin his career was only just beginning to emerge. Nevertheless, the vocal style and charm that he would later bring to shows such as the London production of The Boys from Syracuse is already in place, and he’s the star around which the recording revolves. He’s perfectly complemented by Doretta Morrow (the Princess), an outstanding vocalist whose Broadway credits included The King and I and Where’s Charley?, as well as Kismet. Ian Wallace brings gravitas from his career on the operatic stage to the role of the Emperor, while British personalities Ronald Shiner (Widow Twankey) and Alan Wheatley (Abanazar) ably complete the line-up.

The studio cast recording of Cinderella features two beloved West End musical theatre stars in Denis Quilley (Sweeney Todd, La Cage aux Folles) and Elizabeth Larner (Camelot, Wish You Were Here). Together, they offer their own unique take on this beloved collection of romantic songs from Rodgers and Hammerstein.