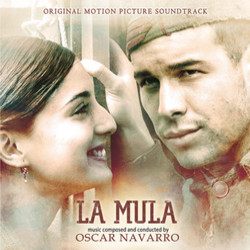 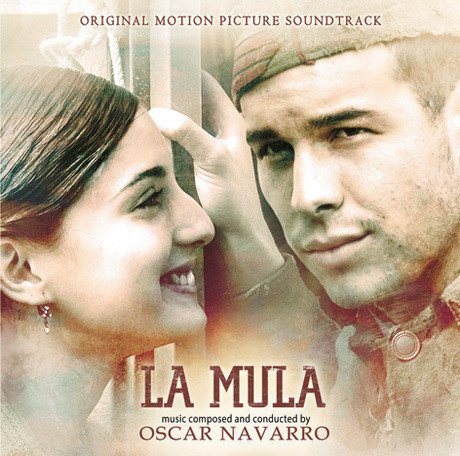 La Mula - 10/10 - Review of John Mansell, submitted at 2013-09-29 21:18:13
Released in 2012, LA MULA or THE MULE was directed by Michael Radford who helmed the award winning film IL POSTINO. The film is a comedy drama based on the novel by Juan Eslava Galan, who also provided the screenplay. The film is set during the closing days of the Spanish Civil War and focuses upon a soldier who finds a mule on a battlefield and decides to take the animal with him on a journey through the countryside as company and to protect it and, as he journeys, to try and make some sense of all the chaos happening around him. The music for this entertaining and delightful movie is the work of Spanish born composer Oscar Navarro who has written an entertaining score which contains many musical colours and moods. Given the subject matter, there are some obvious musical references to the country where the story is set, i.e., solo guitar,
castanets, energetic strings and flamenco clapping, which give the work a real Hispanic sound and atmosphere.
This is a fully symphonic soundtrack that is overflowing with melodies and beautiful tone poems that tug at the heart strings and play with ones emotions, but the score also contains many jaunty and vibrant passages that entertain and delight on many levels. Heartfelt cello is utilized at certain points within the work and its fleeting but effective presence melts the emotions swiftly and decisively. The composer also makes effective use of martial music which makes frequent appearances which although short lived underline the central characters’ involvement with the military. Also included are more plaintive and poignant sounds which come courtesy of solo piano and accompanying strings, creating a rich and romantically slanted mood. Solo violin is employed to create and relay a sense of emotion and also melancholy.
Track one is particularly melodic, beginning with low key strings accompanied by guitar; the strings gradually become the mainstay of the composition mirrored by faraway sounding horn and build to a tumultuous crescendo, reminding me of some of the music from LAS 13 ROSAS by Roque Banos. It’s a sumptuous, poignant and highly melodic theme which Max Steiner might have been proud of, overflowing with emotive thematic properties and a stunning opening to the score. Track two is a variation on the score’s central theme, performed by solo violin, subtly underlined by a scattering of strings adding depth and more emotion to the piece. Track three is a lighter, more upbeat piece, with a real Hispanic sound, castanets, pizzicato and robust strings combine with happy sounding woodwind, brass, solo trumpet and clapping; all combining to create an interesting highly melodic composition with comedic qualities.
Track four is a beautiful and enticing tone poem written for solo piano and two violins; the piano creating a subdued but beautifully melodic introduction which acts as a delicate background to solo violin; joined by a second and further supported by the string section and a rumbling of percussion which brings all of the musical elements together. LA MULA is a great score. It contains so many powerful melodies and so much emotion and passion. It also has the ability to make one smile, be serious and even at times relays a real sense of sadness. The music has a great deal of character and variety to it and once heard, will be returned to again and again. I totally love this score,it evokes so many memories of when film music was grand,when film music was romantic and stirring,in fact when film music was not just good but when it was great. Surging strings and plaintive wood winds, proud brass and strident timpani,are all here LA MULA is a landmark work for the composer and also a score that will be referred to in years to come by collectors and critics alike,as the score that started this gifted composer on his soon to be busy and fruitful career in film music, at the moment the music is not available for commercial purchase, but soon you will be seeing this released on the Kronos and Movie score media label. This is a score that I recommend you purchase, no sorry I INSIST you buy it.... .
La Mula (The Mule) is a Spanish film based on a novel by Juan Eslava Galan, takes place during the Spanish Civil War and Starring María Valverde and Mario Casas. It premiered at the 16th edition of the Festival de Málaga Spanish Film in 2013, obtaining his protagonist Mario Casas the 'Biznaga de Plata' (Silver Barrel Cactus) for best actor.

Based on true events, was shot in the fall of 2009. Produced by Gheko Films, owned by Alejandra Frade and with the music of newcomer sensational composer Oscar Navarro. We proudly present to you the music of La Mula.