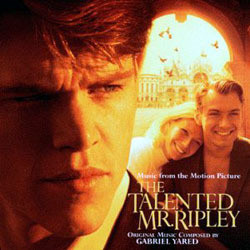 Show reviews in other languages
The Talented Mr. Ripley - 06/10 - Review of Tom Daish, submitted at 2010-10-09 12:56:12
After the hugely successful, but (for me) crushingly dull collaboration between director Anthony Minghella and Gabriel Yared on The English Patient, it is only natural that they would collaborate again on this strange thriller starring Matt Damon and Jude Law. The psychological thriller elements certainly provide for a somewhat Hitchcock style film and has given Yared the chance to pen a much superior score to that on The English Patient. Of course, because Sod's Law always applies, it is only natural that the superior effort is given somewhat short shrift on CD, being as it is mixed with lots of old jazz standards performed by Guy Barker with and without his International Quintet. Fair enough if you like that sort of thing and possibly more enjoyable to people who want a memento of the film, but for your average soundtrack fan liable to be somewhat frustrating.

Admittedly Yared's score does not start promisingly with the pretty low key ethnically challenged Italia, but with Crazy Tom it starts to grow in interest considerably. There is a main theme which generally appears started as a descending woodwind motif; it is moderately memorable and really quite effective. The aforementioned Crazy Tom is based around a running cello motif that is mirrored, counter pointed and generally moved around the orchestra to impressive effect. Mishchief is a vibraphone based, almost jazz suspense type effort, but soon gives way to the mysterious and sombre Ripley (no, not the character from Alien, but the talented male equivalent), which contains woodwind writing that reminded me of Randy Newman's excellent Pleasantville, but the whole thing has a hint of Arabic harmonies. Syncopes brings the score to a sombre close, although there are still a couple of other tracks to round out the album as a whole.

By all accounts, Yared's music was not terribly noticeable in the film itself, but on disc comes across as most effective at setting the mood of betrayal and Hitchcockian suspense. However, the spreading of the score over the disc never allows the atmosphere to fully form and so one is always dragged away to some period song or jazz or whatever. Programming the score in order is well worth doing, even if it does come in at a feeble twenty fives minutes. It produces a generally tuneful, but moody effort that is by no means a masterpiece, but comes together nicely if heard as a whole. Of course jazz fans can simply programme out the score. Would definitely have been worth dividing the disc into two in this instance. Ah well, I'm not a producer, what would I know? The recording and somewhat thick orchestration does occasionally sound a bit fuzzy, but as long as it's not played too loudly the it sounds fine. All in all, another example of a good score spoiled by a poor album presentation, but worth hearing.
Golden Globes: Best Original Score (Nominee)
Oscars: Best Original Score (Nominee)