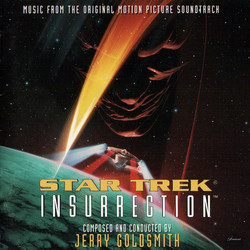 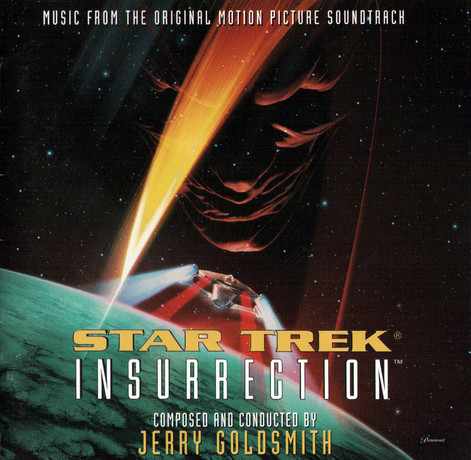 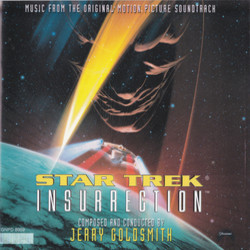 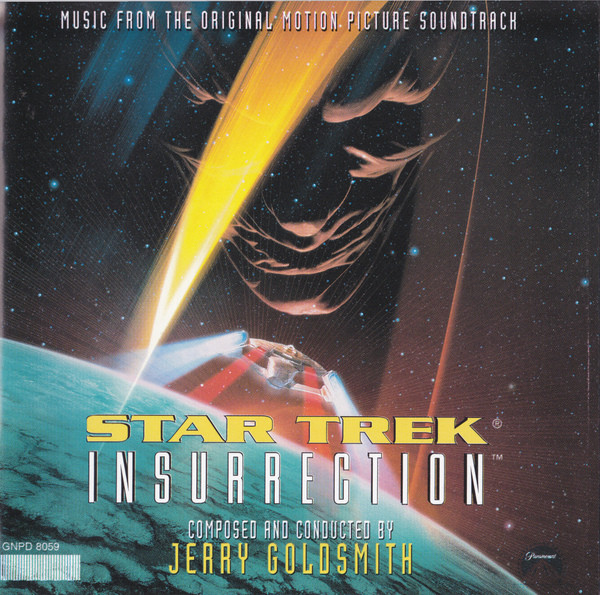 Show reviews in other languages
Star Trek: Insurrection - 06/10 - Review of Tom Daish, submitted at 2010-09-13 20:29:43
It would appear that the Star Trek franchise has returned to Jerry Goldsmith as it's composer of choice and if the quality of the films hasn't exactly been peaking to incredible new heights, at least we are guaranteed a decent Trek score every couple of years as each Next Generation Trek is wheeled out. Insurrection is a more light hearted adventure than First Contact about happy clappy aliens and their fountain of youth planet and those trying to exploit it. The score is a nice mixture of the gentle Insurrection theme, a pretty melody for harp and strings which is introduced over the opening titles. Not hugely memorable, but perfect for the hippy aliens and their utopian life.
Insurrection actually has more outright action cues than First Contact, The Drones Attack and The Riker Maneuver being the highlights which, while similar to US Marshals with low end strings and a nifty echoing synth effect, are exciting and certainly pick up the pace. The Healing Process is actually mainly the final action showdown that comes to an exciting climax before a gentle epilogue leads into the Star Trek: The Motion Picture main theme surrounding the Insurrection theme. The recording here introduces Goldsmith's slightly different performance of the Star Trek theme with a sudden drop in volume and then crescendo during the three note descending part of the melody which sounds quite good here, although his subsequent more exaggerated rendition just doesn't sound quite right.

The quieter moments make good use of the main theme, although there isn't a great deal of variation. It's a more organic score than First Contact that flows extremely well through the gentle opening to the action and exciting finale. Goldsmith always seems to get better reviews for Star Trek scores and while it's very enjoyable, isn't really hugely better than some of his action scores of the same time. However, a worth addition to the Star Trek series, but hopefully Goldsmith will get something a bit more juicy for his next deep space adventure.
Star Trek: Insurrection - 06/10 - Review of Andreas Lindahl, submitted at 2008-01-20 21:25:40
In my opinion Goldsmith's score for Star Trek: Insurrection his is weakest, and most uniteresting, score for a Star Trek film to date. The biggest reason for this is probably the main theme. When the other Star Trek scores have been blessed with powerful themes, the main theme for Insurrection is a very sweet one played on harp. It's very beautiful and all, but it's not what I had expected to hear in a Star Trek score. I know that this, the ninth Star Trek film, is supposed to be more romantic than its precursors - I haven't seen it, so I can't tell - but... well I expected to get a memorable sweeping, or lush main theme, like the one for Star Trek: First Contact.

Then there's another theme related problem. The action music lacks a good theme, too. The action music is very, very good, but I think that a memorable action theme would have made it outstanding. The action music, and the music in general (except for the main theme), is very brassy, as one could expect it to be, and is also very percussive and heavy on synths. Very much like Goldsmith's earlier contributions to the Star Trek films. And maybe this is the real problem. I think it would be a wice choise to let another composer score the next Star Trek adventure (if it will ever be made, that is)? It's always (almost anyway) good to get some fresh ideas, and it would be interesting to hear what a composer like... Joel McNeely for instance, could come up with.

Oh, and in case someone wonders Goldsmith makes use of Courage's classic Star Trek theme in the first and last cues. No Star Trek score would be complete without this theme. Even if it's beginning to get a little worn-out, in my opinion.