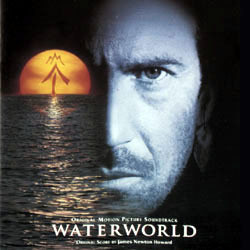 Waterworld - 08/10 - Review of Andreas Lindahl, submitted at 2008-01-20 21:25:40
Waterworld was the most expensive film ever until James Cameron's Titanic sailed up (sorry, but I couldn't resist...), and kicked Kevin Costner's wet epic down from it's pedestal. While Titanic was a great picture, all Waterworld managed to be was a mediocre action flick. But there was one memorable thing with this film - James Newton Howard's music. Howard has written a true epic action/adventure score, much better than the film deserved. Performed by a huge orchestra, choir and a big percussion section, the chances are this score will blow you away.

The album opens with the "Main Title" music, a very percussive piece of music, with all kinds of exotic flutes, and it's not until the second track, "Escaping the Smokers", that the superb main theme is heard for the first time. This is a terrific, exciting fanfare like theme - it really gets you going, especially when it's performed by the whole orchestra, with the brass taking the lead. This theme is also sometimes getting a more romantic, or perhaps I should say epic, treatment - especially in the last track "Main Credits" with lush strings and choir. There is also a wonderful sweeping theme for Dry Land, getting it's best rendition in "Dry Land", performed by the whole orchestra and the choir, plus a couple of other, all splendid, themes.

As this is a action/adventure score the most of the music will get your adrenaline pumping. Newton's music manage to do just that with bold orchestrations, with heavy percussion, racing strings and magnificient brass chords. A splendid example is the track "Helen Frees the Mariner". This is action music at its best. All in all, James Newton Howard has written a superb score for a rather lousy film.
Waterworld - 08/10 - Review of Tom Daish, submitted at 2010-09-26 20:18:53
Kevin Costner's epic action adventure has a great contemporary action score from Howard. He mixes huge orchestral forces, with an impressive percussion section, a choir and synths. The effect is often mind blowing. The action cues are plentiful and good. There is always a thrilling pulsating rhythm that only Hans Zimmer can match. The orchestral writing is also good and there is much dashing about. There is some amount of pastiche in the writing. The Hans Zimmer style synths, the orchestral dashing about is similar to John Williams. It is a different pastiche to say Stargate though as it is firmly rooted in a very contemporary mould. There are some moments of quiet, the most impressive of these is the absolutely charming Swimming which features some beautiful solo female vocals against delicate harps and strings. The Mariner's theme is not used that often, no where near as much as Indy's theme is used in Raiders of the Lost Ark for example, neither is it as memorable, but you will likely be humming it after a few playings of this CD. For a perfect example of a modern action score, this is probably the one to go for.
The music of this soundtrack was used in: