The  Back to the Future Trilogy 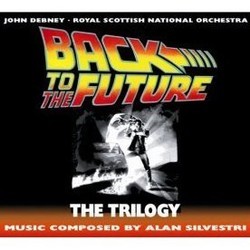 Show reviews in other languages
The Back to the Future Trilogy - 06/10 - Review of Tom Daish, submitted at 2010-10-09 12:27:05
Despite probably being Alan Silvestri's most famous score, Back to the Future is still only represented in its original form as two tracks on a song album. For this album, Varese have re-recorded around 25 minutes of the original score, about 12 minutes of the first sequel and re-released a handful of cues from part III, plus a re-recording of music from the Back to the Future ride. While not an unreasonable idea in theory, it was unlikely to please many people, even though I'm not entirely convinced that these particular Silvestri scores are best served by full length albums. I think nostalgia about the films and the terrific main theme have slightly overshadowed the fact that Silvestri wasn't quite such an accomplished composer as today and overall, these are far from his best work.

Whatever you say about the scores as a whole, there is no doubting the potency of the Back to the Future main theme. I would go so far as to suggest it is probably the most famous non-John Williams theme of the 1980's and instantly recognisable to anyone who grew up with the movies of that decade. At just a shade under two thirds of the complete score, the music presented covers more or less every musical idea from the first film; there are certainly no desperately important tracks missing. Silvestri's early habit of repetitious full length action is occasionally in evidence, but the all important theme is there to the rescue when things threaten to get monotonous. His use of the melody is actually very ingenious, perhaps one of the best being in Marty's Letter where he changes an heroic and exciting fanfare into something that is quite moving. A second descending suspense motif, which does occasionally repeat a fraction too often, makes up the only other important thematic material of the score.

As is usual, the middle chapter of a trilogy is the darkest and no more so than in the case of the Back to the Future films. In fact, so dark was this chapter that the response was somewhat unfavourable; the even more mind bending time travelling plot was somewhat impenetrable to many and the depressing alternate reality Marty and the Doc found themselves did not sit as comfortably with family audiences. Of course, Silvestri's music is also darker in texture and the main theme is used less frequently, although this is less apparent from the selections here. Although the suite is fairly brief, most of the sequel music was very similar to the first film, only the brooding music for the alternate 1985 is substantially new, but not hugely interesting on its own.

After the twisting plot of the second, Zemeckis completed the trilogy with a much more straight forward narrative that contrives to send Marty and the Doc back to the wild west. For this, Silvestri composed two new, rather good themes. The first is a bouncing, simple, yet highly memorable western theme that perfectly sets up the location and the second is a love theme for the Doc as he discovers true love outside of his time travelling exploits. The music is definitely best when either of these are playing, especially since so much of the straight action music in the third chapter is rather uninspired. The Back to the Future ride is one of those virtual reality rides, where you sit in a mock up Delorean and are lurched about in time with images depicting a ride through history. For this, Silvestri was asked to write some music to accompany the ride. The theme is used sparingly and to be honest, much of the rest of the material he wrote isn't terribly exciting, but works a treat when you're on the ride itself.

Perhaps the biggest disappointment for this album is the performance which is often not up to the usually high standards of the RSNO, even the concert arrangement of the theme his a few hairy moments. Silvestri's music needs crystal clear brass and the RSNO simply isn't concise enough. Although many fans of golden age music decry Varese for their concert hall acoustic, I usually find it most appealing, but in this instance would have to concur that a drier acoustic would have been preferable. The difference in playing and recording is even more apparent when you get to Silvestri's original recordings for part three. Anyone who loved the Back to the Future films (as I did) will probably be pleased to have this album simply because it has material you can't legitimately hear elsewhere, but it isn't terribly faithful in recording style and what the performance has in dynamism, it lacks in precision and clarity.

Soundtracks from the collection: Back to the Future