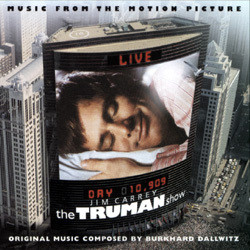 Show reviews in other languages
The Truman Show - 08/10 - Review of Andreas Lindahl, submitted at 2008-01-20 21:25:40
One of the many things that made The Truman Show such an amazing and wonderful film was it's useage of music. I will take the scene where Truman reunites with his "father" as an example. As the scene gets more emotional - thanks to Christofs' (the shows' creator and director, played by Ed Harris) genius - so does the music, which is performed by a musician (played by composer Philip Glass, by the way) live in the control room. Perhaps we didn't noticed that our emotions were being manipulated, with the help of sweeping strings, until Christof orders the music to reach it's souring climax. That's what is so wonderful with the music for The Truman Show - that you don't know whether you are listening to the score for the movie The Truman Show or the score for the TV show, with the same name.

To quote the director Peter Weir in the liner notes: "Due to the round-the-clock nature of the show, I determined that Christof would play either pre-recorded music (as a DJ might do) or, if events called for it, improvise with one of the musicians who worked in several shifts". For the pre-recorded music Weir - or Christof? - used existing film music by Philip Glass and Wojciech Kilar, as well as Mozart and Chopin. More about those cues later. The task to compose the "improvised" music went to German/Australian composer Burkhard Dallwitz, with assistance from Philip Glass, who also composed a couple of new cues for this film. The music is primarily electronical - after all it is being improvised for the TV show... - and is very good, works great in the film (or TV show), as well on CD and is very varied. "It's a Life", the main theme, for instance, is a relaxing cue with synthesized voices and piano. "Dreaming of Fiji", composed by Philip Glass, is also slow and a little sad, synthesized cue while "Drive" is a percussive track, with dark strings and electric guitar, used in the film when Truman tries to leave Seahaven by car for the first time. And then we have the already mentioned "Reunion" music, which is a traditional dramatic Hollywood cue, with piano and emotional string crescendos, which leads directly into "Truman Sleeps", a beautiful piece performed in the film by the composer - Philip Glass - himself on the piano. "Truman Sets Sail" is, like "Reuonion", very heavy on slow strings, while "Underground/Storm" is very dramatic, with it's repeated bass line, percussion and synths.

OK, let's mention the pre-recorded music by Glass and Kilar. The cues by Glass, taken from the scores for Powaqqatsi, Anima Mundi and Mishima are of variuos styles. "Anthem - Part 2" (from Powaqqatsi), for instance, is a great dramatic piece, with a pounding bass line, percussion and synths, while "The Beginning" (Anima Mundi) is a very percussive, rather boring track, to be frank, with this almost ticking omnipresent rythm. Kilar's contribution concists out of a cue titled "Father Kolbe's Preaching" - a very beautiful piece with sweeping strings and piano.

I think seeing the film is of great help to really appreciate the Truman Show soundtrack. This is of course not something that's unique for this particular soundtrack and film, but with The Truman Shows I think this is especially important. So much of the listening experience lies in knowing what happened in the film, when listening to the music.
The Truman Show - 08/10 - Review of Tom Daish, submitted at 2010-09-11 00:04:23
This was Jim Carrey's first big break as a 'serious' actor and while I would suggest that he was excellent, I don't think he's likely to knock off the top serious actors of our time just yet. The intruiging concept had Truman Burbank, played by Carrey as someone who appears, unknowingly in a real life soap opera. Of course, things start to go wrong and that's what makes the film so interesting. For the score, a rather than less than conventional approach was taken; I have never heard of Burkhard Dallwitz otherwise, although to be fair, his score doesn't take up the largest proportion of the album. After the brief, voice over opening cue, there is what might be deemed the main theme which is a wonderful piano melody, sadly not deployed noticably anywhere else. It is certainly a good start, but after that I think that Dallwitz's music gets rather swamped by the tracks cued in from various Philip Glass scores. In fact, some cues were written by Glass for the film especially and also stand out as noticably good. Of Dallwitz's other contributions to the score, Drive and Underground - Storm are definte highlights with some pulsing, minimalist drumming, synthesised as far as I can tell, but superbly written and using the synth pallette to the maximum.

Of course Philip Glass is a minimalist composer par excellence and he has written some of the most notable minimalist scores, including his very famous Koyanisqqatsi (although nothing from that score features here). Anthem Part 2 from Powaqqatsi is a marvellous choral/orchestral effort with some gorgeous harmonic progressions and was one of the most notable cues in the film, as I recall. The Beginning from Anima Mundi is a much more ethnic based cue, featuring a background of tribal drums, digaradoo effects, some synth effects and the occasional incredible vocal effect. Living Waters from the same score is a lot more subdued, but no less impressive. Of Glass' original contributions to the film, Truman Sleeps is a definite highlight, this is much more in the vein of Dallwitz's contributions, featuring a gorgeous piano style... somewhat reminiscent of Beethoven perhaps. This is actually performed onscreen by Glass himself, just have to look out carefully! The other miscellaneous tracks, such as the Chopin and Kilar tracks don't really mesh terribly well with the rest of the score's texture. Surprisingly, the other cues do blend pretty well and while lacking strong themes on their own, make strong enough statements, while having the same minimalistic tendacies to blend reasonably well together.

This is a somewhat unique score, almost like hearing the temp track in a lot of ways, but evidently they wanted the cues they picked by other composers or, rather unlikely I would suggest, Dallwitz's music just wasn't exactly what they were looking for. Much though I liked hearing all the Glass cues (it makes for a good, yet brief sampling of his work), I think that Dallwitz would have written an excellent entire score. Even those who aren't terribly fond of more minimalist music will delight in most of the selections since the endless variation of the musical loops are fascinating and some of the orchestration is experimental, but without just sounding desperate for something new.
Golden Globes: Best Original Score (Winner)