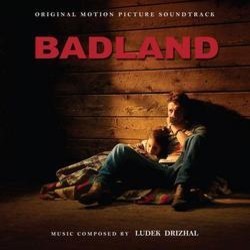 Badland - 09/10 - Review of John Mansell, submitted at 2013-07-27 22:22:22
You may not have thought that you have heard of composer Ludek Drizhal, but maybe you have not heard his name or immediately associate him with any one picture or score, but you have certainly heard some of his work via his connections with soundtracks such as THE CELESTINE PROPHECY where he performed the task of doing orchestrations for composer Nuno Malo. As a composer he has already scored a number of feature films and also movies that have been produced for the syfy channel, Drizhal is a composer that can it seems turn his hand to many musical tasks, conducting, arranging, orchestration and also even performing violin and piano. So he is a talented individual, that thankfully has begun to become involved with movies that are slightly more high profile, One of his scores BADLAND (2007), is a beautiful and poignant work and has recently has been issued on KEEP ON MOVING RECORDS, the composer fashioned and shaped a musical score that is highly emotive and also posses a real intimacy. The film although an independent production does in fact have the look and the feel of a real Hollywood studio picture. It tells the story of an American soldier who is having problems coping after returning from Iraq, it also poses the question; Can a mentally ill or unstable Iraq war veteran who murdered his wife and two of his children learn to love and trust someone again? The music for me has a number of affiliations with the style and sound of Ennio Morricone, Drizhal utilizes a beautiful soprano within a number of the cues and this is in a word mesmerising and stunningly moving and emotional. The music seems to contain a number of styles and each and every single one of them works wonderfully within the context of the movie and also away from the images. At the time of the films release one critic thought that the score was overblown, calling it Ennio Morricone’s Viking Funeral, but for me this is what movie music is all about, melodic and haunting themes, intimate and at times melancholy tone poems with darker moments raising their heads at times and underlining drama, sadness and romance and if this critic thought of Morricone when he heard Drizhal’s music then surely this is compliment and recommendation enough as to the scores quality, finesse and musicality. Track number one, THE OPENING, begins with quite sinister sounding low strings, punctuated with harp and a rumble from the percussion, piano and woodwind then begin to come to the forefront and shape the introduction to what is to be the scores central theme, although this does not really fully develop there are the beginnings of a core theme here, which will be returned to throughout the score and further developed and expanded upon to create some beautiful rich and even lush musical passages.

Track number two, DUSTY ROAD, is I suppose the first such moment, piano and horns underlined by strings introduce the cue, until it eases wonderfully into solo female voice, which is certainly in the style of Morricone, but I would say in a more classical style, woodwinds and strings embellish further the soprano carrying her on a wave of lushness until the cue concludes. Track number three, JERRY’S THEME, is a more fleshed out version of the opening track, and is a more prolonged rendition of the central theme from the score, and also one that accompanies the stories main character. Strings establishing the theme and woodwinds adding a touch of melancholy to the proceedings, again there is a richness here that is further established by subtle use of brass and a scattering of piano that is laced with harp. I think for me one of the scores highlights is track number, thirteen, JERRY’S CONFESSION, plaintive piano that is supported by strings introduces the piece, woods again come into the equation, and strings segue in from nowhere it seems, to create a highly emotive arrangement of Jerry’s theme, and although this is a short lived cue it hits the mark perfectly, creating an atmosphere of sadness and also one that is filled with regret and loneliness. Overall all I can say is that this is a soundtrack that I recommend without reservation, you will love the melodious themes, you will delight at the scores delicate and subtle nuances, be thrilled and moved by the use of soprano and also will be intrigued by the works darker moments, please just go buy it..
Directed by Francesco Lucente, Badland tells the story of Jerry Rice, a Marine reservist who used to fight in the first Gulf War when he was still just a young, somewhat idealistic patriot. When he is called back to serve in Afghanistan and Iraq, Jerry is reluctant to go because he is a father now, but he has no choice. Much older and embittered by life, Jerry returns home as a changed man who has been transformed by the horrors he has seen. He live in great poverty, his family is afraid of his uncontrollable outbursts of rage, but his wife Nora remains unsympathetic towards Jerry’s frequent nosebleeds and sudden night terrors. When the hardened war veteran realizes that Nora has betrayed him, his despair drives him to commit a heinous crime while taking his daughter, Celina with him…

The score for Badland was written by Ludek Drizhal, who created an exciting dramatic score with moments of great textural suspense thrown in for good measure. Each major character has his or her own memorable theme ranging from Celina's innocent Dvorak-inspired tune to moment of great psychological tension for the continously disintegrating Jerry. Conducted by Bela Drahos and recorded by the Budapest Symphony Orchestra, our release of Badland features a lot more music than what appears in the film, including the full version of Ludek Drizhal's country ballad, 'Nothing There'. The package is rounded out by a handsome 12-page booklet with liner notes by Gergely Hubai discussing the film and the score based on interviews with the filmmakers.
'Badland' Original Motion Picture Soundtrack
Limited Edition of 500 copies
Label: KMRCD 027
Date: 2007
Tracks: 27
Time: 79'49
Trailer:


Soundtracks from the collection: Limited Editions