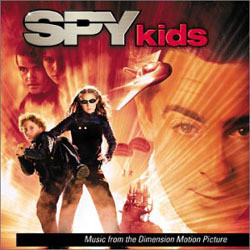 Show reviews in other languages
Spy Kids - 06/10 - Review of Tom Daish, submitted at 2010-09-10 23:50:09
In an age of pre-packed, identikit kids' films, Robert Rodriguez's Spy Kids made for a refreshingly zany, pint size take on the spy genre. Admittedly, junior spies aren't exactly a novel concept, but Rodriguez's cartoon come to life style, with wild production design and an amusingly loopy plot turned it into an engaging surprise hit. While it's not unusual for multiple composers to work on a particular score, Spy Kids probably takes the biscuit when it comes to composing by committee, with eleven contributors, including the director (and his brother). Danny Elfman and John Debney make the biggest contributions with more than a couple of tracks each, although Rodriguez's liner note indicates the Debney's job was largely that of arranging Elfman's material. Then again, with so many people working the music, determining exactly who did what is difficult at best.
Kids' movies, more than most, receive scores that are written for moments, with less regard for fashioning an overall musical structure, but having said that, Spy Kids is moderately coherent. Perhaps the biggest surprise is that Elfman's music doesn't stick out more than it does, his style being so distinctive and less easily fashioned to fit alongside that of others. However, they constitute some of the highlights of the album, notably My Parents Are Spies and the rather silly Floop Song, performed by Alan Cumming, although it does sound a bit like an outtake from The Nightmare Before Christmas. They might be the highlights, but the most memorable aspect is the music's occasional Hispanic flavour, especially the acoustic guitar contributions of Heitor Pereira during the opening and closing Family cues. Spy Wedding adds a huge chorus to an acoustic guitar backing, a joint effort between Los Lobos and Robert Rodriguez - clearly the kind of orchestration that could only work in a studio. The intervening cues are a more 'normal' mixture of fun, but cool spy riffs and the obligatory comedic episodes, notably Spy Kids Demonstration.

The album concludes with Spy Kids (Save the World) a brief, but energetic slice of funky, teenage rock. I'm surprised at how many reviews have stomped all over it, but for my money, a great way to end and with a tune that recalls the score's main theme, although penned by yet more composers - David Newton, Davis Klotz & Emily Cook. In an age when some film composers can't resist repeating the main theme ad nauseum throughout an entire score, Spy Kids is rather the opposite and severely underplays its thematic content, indeed several ideas crop up only once. Clearly the combination of an overabundance of composers and the fairly brief running time results in an album that samples everyone's work, but doesn't have time to let any one part grow into anything else. The result is that it never becomes more than the sum of its parts and doesn't quite take off. However, plenty of fine, individual moments and a lot of fun, so worth a listen or three.