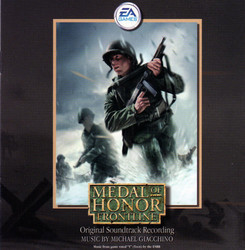 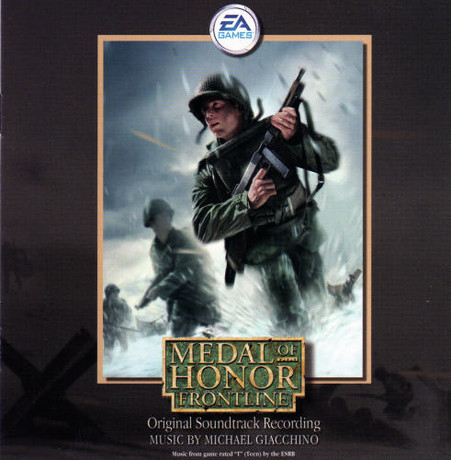 Medal of Honor: Frontline - 08/10 - Review of Tom Daish, submitted at 2010-09-11 09:31:55
Despite the continued quality of his video game scores, Michael Giacchino still doesn't seem to have attached himself to many high profile films, his highest profile work otherwise being on the TV series Alias. This disc is the third score released from the Medal of Honor computer games series and continues the quality of composing that he achieved with the first two. Whereas the first was quite a spirited adventure score, the second had some more reflective moments, here the more sombre moments seem to dominate. This is clear from the opening track, Operation Market Garden, which starts with a wisp of his Medal of Honor theme, but moves into darker territory with a sombre, hymnal main theme which wouldn't be out of place in a serious documentary on the Second World War. In fact, it invites comparison with Carl Davis' music for The World at War television documentary.
Whereas several passages of the first two scores recalled John Williams' Indiana Jones adventures, Giacchino seems to steer away from the action being too spirited and upbeat. There is a gritty urgency that makes it less of a sheer, instant pleasure, but the greater substance is welcome. Dissonance is employed in such a way that some passages wouldn't be out of place in a horror film - although there is nothing so unpleasant as many of the post Scream horror scores. However, the eerie strings and orchestral parts that don't appear to be quite in synch ensure that there is a brooding tension that is most effective. The music has developed in other ways, there are certainly more genuinely moving passages. Outside of the epic, but soberly impassioned opening track, cues such as Arnheim and After the Drop are striking in their emotional impact. The latter has a truly lovely solo vocal opening that maybe cliché, but employed so effectively that to complain would be churlish.

In a film, some of the cues could be considered a little melodramatic, Giacchino wears his heart on his sleeve, but only because most modern films demand very subtle scoring and such genuine drama is a pleasing change of pace. I was tempted to say that some might find this effort a little too sombre, but there are enough thumping action cues to satisfy their needs. However, the added emotional depth probably makes it a more satisfying experience overall. This disc is only available at EA Games' online store, although I wouldn't trust it to remain in print for too long, so probably best to snap it up while you can. Again, the Northwest Sinfonia perform admirably and overall effect is a stirring 79 minutes of score. Highly recommended.

Other releases of Medal of Honor: Frontline (2002):