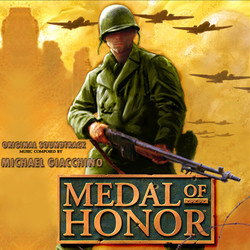 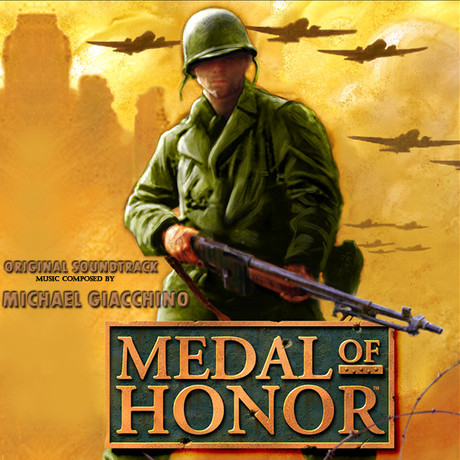 Medal of Honor - 10/10 - Review of Andreas Lindahl, submitted at 2008-01-20 21:25:40
I remember when computer games had graphics mostly consisting of large squares in a couple of colors, with sound and music so primitive that the cellular phones of today sound better. Actually, that wasn't so long ago, but, as we all know, the technique has somewhat improved, and today video games look more and more like the real world, often constructed as interactive motion pictures, with filmed, or at least amazing looking computer generated video sequences. And not too long ago, the music was just looping MIDI-tunes, playing over and over again - it actually sounded quite bad, and was terribly annoying. But then, all suddenly changed - Heart of Darkness was the first CD-ROM game to feature an orchestral score (composed by Bruce Broughton), and others soon followed. And now comes Medal of Honor - a first person POW adventure game, based on the film Saving Private Ryan, with an original, orchestral score by composer Michael Giacchino.

And Giacchino's score is, simply put, amazing. With big, brassy orchestrations, this is great music in the style of John Williams' adventure and action scores, such as the scores for the Indiana Jones films. Giacchino has previously written music for the computer games based on The Lost World and Small Soldiers, and the fact that he has not scored any bigger films is a mystery to me. Because, without doubt, Giacchino is a very, very talented composer and should not have to write music for games - give the man a big action or adventure film to score, all you producers and directors out there!

The music is performed by The Northwest Sinfonia, which, surprisingly, is just a 64 piece orchestra, as the orchestral sound is quite large. Something which probably has been achieved with the help of some clever mixing. And of course the orchestrations by Tim Simonec, who has made a splendid job, to say the least. The main theme is presented in the title cue, "Medal of Honor", which opens with a lonely, mournful trumpet solo, with other instruments joining, building to a wonderful, hymnlike, ending. "Taking Out the Railgun" is one of the more Williams inspired cues on the soundtrack. It is an excellent action and suspense cue, resembling Williams' music for Indiana Jones and the Last Crusade. It should be pointed out that none of the music Giacchino composed for this game is stolen from any of Williams' scores. Instead, much of the music can be described as an homage to John Williams and his music, which only has served as a source for inspiration. There are many, many great action tracks on the CD, but "Taking Out the Railgun" is, in my opinion, the most enjoyable. The majority of the score is, not surprisingly, militaristic, with dramatic snare drums, exciting staccato brass and strings, as well as woodwind runs. It's all there, and it truly is highly entertaining. There are also large portions of patriotic music, filled with honor and pride, giving the score a more reflective and mournful side, as well.

"The Road to Berlin" is a jazzy big band tune in the style of Cole Porter, clearly inspired by the same composers' "Begin the Beguin" - we're talking almost identical melodies here... The release also includes two bonus tracks at the end (these are not included in the tracklist, but they are there). The first seems to be sound excerpts from the game, with nazis running around yelling. The second is a performance of the National Anthem, conducted by Michael Giacchino's mother! It is actually rather... horrible. But also very entertaining.

The liner notes are some of the best I have ever seen. They include a note from the producer, Peter Hirschmann, some facts on how Giacchino approached the scoring of the game, a track by track description, and some information on the composer. If all soundtrack releases came with booklets like the one for Medal of Honor I would be a very happy man. OK, so I already am a happy man, but it sure would not do any harm...

It should be pointed out that the soundtrack, released by Dreamworks, isn't available in any regular CD stores. It is only available for purchase on the Internet, at Amazon.
Medal of Honor - 08/10 - Review of Tom Daish, submitted at 2010-09-11 09:31:09
While not exactly elderly, my perceptions of computer game music are somewhat rooted in the miscellaneous bleeps and nondescript synth efforts of the early 1990's. With the onward advance of technology, the ability to programme in more complex music has now made it possible to track in actual orchestral scores as the game plays out. Obviously the music must be pre-recorded and thus is unlikely to exactly match what is happening on screen, but it does make for more interesting listening. Michael Giacchino has previously written music for Dreamworks' Lost World computer game and the success of that effort led to Medal of Honor which is a thinly disguised spin-off from Spielberg's superb Saving Private Ryan.
Obviously with Spielberg being involved at some point in the production, rather unsurprisingly, the music is a rather good John Williams imitation effort, although it owes more to the Indiana Jones scores than Saving Private Ryan. The main theme is presented in Medal of Honor and is a gritty, but patriotic affair with the Northwest Sinfonia brass getting a fine work out and is a fairly memorable effort, setting the tone most effectively. The theme appears in brief snippets in many of the other tracks, but is never really given to endless outright quotations. In fact the subtle blending is very effective, putting some more well known composers' use of motifs to shame.

This being primarily an action orientated computer game, much of the music is going to be rousing and dramatic. The openings of many of the tracks are something of a red herring, often starting with subdued bouncing string figures that are rarely promising - just repeated orchestral phrases and nothing substantial - but this is not the case as Giacchino develops the music around these openings and often gives rise to some quite thrilling action music. Taking Out The Railgun has hints of the Tank Chase from Last Crusade, with the swirling 'cello and bass figures (which seem to be something that Giacchino is particularly fond of, as they appear a number of times), but soon brass, woodwind and percussion are layered on top and we have a brassy and exciting slice of over the top orchestral action. There are more tense and suspenseful episodes such as Locating Enemy Positions and Rescuing the G3 Officer which make good use of more dissonant material that occasionally recalls Born on the Fourth of July.

The final few tracks are perhaps a fraction unnecessary, the Road to Berlin is a pastiche big band/jazz type thing and the final cue adds dialogue on top of the music featured previously to turn it into a radio broadcast as featured in the game. I would be hard to tell apart the alternate Medal of Honor from the opening track, but it's a nice way to round out the score (if you bypass the final album track). Certainly there are plenty of John Williams ideas mixed in, but no more than some of Joel McNeely's earlier works. If Saving Private Ryan was too subliminal by half, then this might just be what you were looking for. It may be pastiche, but it's done with such flair and performed so convincing by the Northwest Sinfonia, that it hardly matters after a while. Great fun.