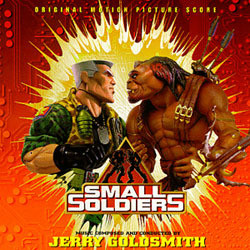 Show reviews in other languages
Small Soldiers - 08/10 - Review of Tom Daish, submitted at 2010-09-13 20:25:55
Joe Dante and Jerry Goldsmith seem to have a good thing going with Dante's often silly and macabre humour and Goldsmith's ability to create wacky and yet generally listenable music. Therefore, it is ironic that Small Soldiers is actually quite a sensible score. Much of it plays as a more standard fantasy adventure score, with a few bracing action cues and some more light-hearted moments. Perhaps the only aspect of the score that is vaguely wacky is the use of When Johnny Comes Marching Home along with a three note electric guitar twang, which works, honest! The opening cue reminded me of something that Danny Elfman might have written, one of those very rhythmic and almost drudge-like marches. Goldsmith adds a rather fun noise that is somewhat hard to describe, but it works very well indeed in context. The main theme which is introduced in this track doesn't appear much on the score, although I have no idea how much it appears in the film. Some has said that it was like Patton and I guess in some ways it is, but ironically it's probably a little bit more threatening than the immortal Patton March.

The action cues are probably the highlight of the album. I quite enjoy action cues which are not only exciting, but have an element of fun about them and on this score, Goldsmith delivers the goods supremely well. Prepare For Assault is the first and despite being quite short, is fairly highly charged. Trust Me is probably the best of these cues and zips along at a fair old rate with the synth drums and orchestra going hell for leather.

Off to Gorgon makes a suitable finale track and makes up for a lack of End Credits (although I suspect that the end credits are just purely songs). I also like the little section that sounds like the theme from Stingray! (Don't know if that was intentional or not, although with Dante's sense for plundering films for jokes, I wouldn't be surprised if it was meant to be there!) The remaining tracks are quite subdued and although they aren't exactly outstanding, make for pleasant listening and mix in quite well with the rest. Although some have been disappointed with this score and release, I was very pleased that it was actually much more enjoyable than I imagined (having gone from high hopes, to worrying that it would be poor, then back to thinking it's great!). I doubt that it will appear on your list of top Jerry scores, but it's a very enjoyable album that after a few listens will have you rapt!

Other releases of Small Soldiers (1998):