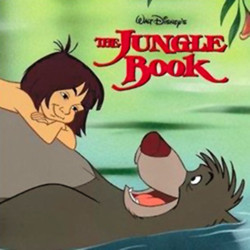 Show reviews in other languages
The Jungle Book - 07/10 - Review of Tom Daish, submitted at 2010-10-10 09:40:15
I think it would be fair to say that most people immediately think of the animated Disney version of The Jungle Book when Rudyard Kipling's (not the cake bloke) often filmed yarn is mentioned. Before Disney and The Bare Necessities, Miklos Rozsa wrote a colourful score for the 1940 version, but for this update re-telling - replete with newly added tension building subplots about buried treasure and that malarky - starring Scott Lee, Basil Poledouris has written a lush and indulgent score. The album opens with Two Different Worlds, curiously similar in title to a song from the more recent Disney version of Tarzan - a variant on The Jungle Book story - performed by Kenny Loggins. It's a nice enough ballad, but is actually less fetching than Phil Collins' effort.

Main Titles sets quite a broad scope for the score, although it contains one of those expansive and desperately noble themes that somehow manages to miss out on being the big, memorable tune that Poledouris surely intended. Perhaps surprisingly, Poledouris doesn't flood the score with much in the way of jungle percussion or many synth effects and the result is appealing, but fairly straight forward. Shere Kahn Attacks is filled with menace, but the composer doesn't seem to produce the kind of well structured action of his sci-fi scores and the focus is lost along the way. Poledouris' most obvious mannerisms work best in a sci-fi or fantasy context and they are only apparent on a couple of occasions, notably a few string runs towards the end of the suspenseful Treasure Room.

The Jungle Book is one of those scores that is only disappointing because it just isn't quite as good as you think it is. That probably sounds odd, but you listen to it, enjoy it, but it never quite leaves its mark in your musical consciousness. The pieces for a varied and memorable score are there, but something is missing and in retrospect it doesn't quite fulfill its potential. Like its main theme, the score as a whole never quite hit its stride and so the big, memorable moments it strives for don't materialise. That is not to say that it's unenjoyable, the themes might not be top tier, but they are certainly effective and there are enough of them so that it never becomes dull.