Titanic and Other Film Scores of James Horner 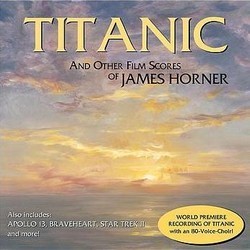 TITANIC is now the biggest and most successful motion picture in film history. The original soundtrack recording (with worldwide sales of over 20 million copies) used an orchestra of studio musicians and a synthesizer in place of a real choir. Now, sounding bigger, lusher and more beautiful than ever before, TITANIC has been recorded with the 90-piece Royal Scottish National Orchestra and their 80-voice choir! The epic and glorious sound is truly breathtaking.

You haven't heard TITANIC until you've heard this TITANIC.

as well as themes from other Horner classics such as

Other releases of Courage Under Fire (1996):