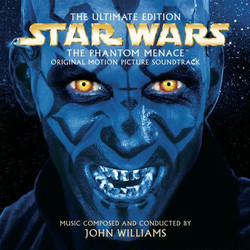 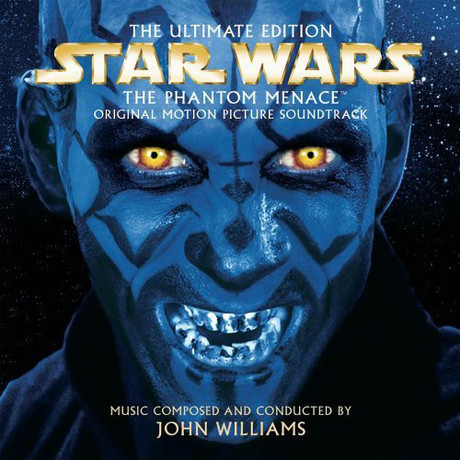 Show reviews in other languages
Star Wars Episode I: The Phantom Menace - 06/10 - Review of Tom Daish, submitted at 2010-10-02 13:31:43
It seems that record labels are sometimes damned if they do and damned if they don't. With John Williams and Star Wars the problem seems to be magnified a hundred times by irritatingly obsessive fans who feel that unless they get what they want, there's really no point bothering. About the only defense I can muster is that George Lucas has rather played the collector's game well and the number of Star Wars music releases is high and having to pay for numerous versions of the same score can get a little frustrating as well as expensive. I have the 4CD anthology plus all the Special Editions of the originals, some people will have the original LP or CD releases as well as other versions that have appeared over the years. In this instance, however, they went from the original (and very good, in my opinion) album release and bypassed years of almost complete releases and indulged fans with every note of music as it appears in the film. Big mistake.

After the event, The Phantom Menace is something of a footnote to the original Trilogy and despite a bigger budget, a vast amount of time and resources for effects and post production, the result is still a fairly empty, convoluted and very disappointing concoction. Listening to this new double CD, it seems that Williams felt his score almost went the same way and so his original album is sequenced to make the music flow effectively and contain all the most important sequences in a fashion that sounds somewhat closer to how they were composed. Unlike the first three films where Williams' music remained largely (I would guess that at least 90% appearing in the film as written) intact, for The Phantom Menace, Lucas went a bit nuts with the editing - particularly in the final act - and so Williams' music was necessarily hacked up to accommodate this. Unfortunately for Sony Classical, they decided that releasing an expanded edition of the music should be done in film order rather than as it was originally written. Unfortunately, my feeling is that this was a bad move given the jumbled musical mess that some scenes are left with, which could be more easily glossed over on screen, but on disc are all too obvious.

The first disc plays reasonably well, but the wall to wall scoring of dialogue scenes results in some sections really being rather tedious. Underscoring dialogue is difficult at the best of times, but the meandering Williams sometimes indulges in below Lucas' trite script really doesn't show up Williams for the skilled composer he really is. One need only compare something like the moment when Obi-Wan and Luke first listen to Leia's holographic message when Williams' music uses themes wisely and has a purpose and then listen to the conversation between the Jedi and Boss Nass which idles in the background with no real reason for being there other than to fill aural space. The poor editing of the film results in some sequences such as the under water journey coming across badly with the original choral build up of the original album displaced when the in film action switches around. This happens a lot, too much. Some phrases seem to have been digitally repeated to fill in for extra time during some of the action sequences. I can't seriously believe that Williams wrote them with the exact same phrase several times over before moving on.

The less said about the final act the better really. The editing of the music is admirable, I'll admit that. Digital technology allows the music to play so that it at least sounds like that's how it was played originally, even if the abrupt changes in style and content fail to convince otherwise. There are some high spots of course. People don't clamor for expanded albums for nothing. The music for the arrival of the two Jedi at the beginning works well with some well wrought action and suspense music. The fanfare for when Anakin wins the pod race is something I always liked, despite its brief length - the clever twisting of Anakin's theme from a lullaby into a fanfare shows Williams talent for playing with his thematic material to fit any circumstance. Some of the other missing action sequences are worth hearing, particularly when they play in a manner that at least sounds like it might have been written like that originally - i.e. it doesn't skip from style to style every few seconds. One much sought after sequence was the moment when Anakin leaves his Mother to become a Jedi, the stirring use of the Force theme perhaps recalling the Tatooine double sunset and Luke deciding his future in the first film.

Despite my harsh comments above regarding obsessive fans, I still think that Sony Classical were basically stuck between a rock and a hard place and would never have pleased everyone. I like to think that my film music collection doesn't stop at all things Star Wars and so am quite happy to hear this new album, be a little disappointed, but move on to something else. I think that Williams' music would have fared better had it been released as written since Williams' skill as a film composer whose music successfully translates into album format means that the original arrangements are likely far superior, although we're unlikely to know how it was originally intended - or at least until Sony are bullied into it by moaning fans. Then again, the weaknesses of the score would still be in evidence around the really quite tedious low points that the original album mainly side stepped. Lucas either needs to start making better films (we can all hope) or start allowing Williams to hold back from writing music to every scene in the film. Had the latter condition been in evidence then we'd at least have a concise musical version of the film rather than an album which points out the high points of the film just as well as it highlights the low ones.

Soundtracks from the collection: Star Wars