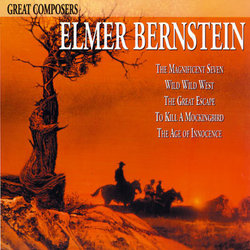 This year Bernstein, now 77, has composed new scores for Will Smith's WILD WILD WEST, Michelle Pfeiffer's DEEP END OF THE OCEAN and HBO's recent film Introducing Dorothy Dandridge. Bernstein is also reuniting with Martin Scorsese for the first time since THE AGE OF INNOCENCE on the director's upcoming BRINGING OUT THE DEAD:

In his spare time this year Bernstein composed a guitar concerto for Christopher Parkening and is preparing to join radio legend Norman Corwin and broadcasting legend Walter Cronkite for a special broadcast to close this millennium...and open the next. The year 2000 will celebrate Bernstein's 50th year of composing for film. To join in this celebration we have compiled this collection, looking back over 50 years of great music. Included are some of the most famous themes ever composed for some of the most loved films of all time.

• The Magnificent Seven
• The Great Escape
• To Kill A Mockingbird
• Wild Wild West
• The Age Of Innocence
• True Grit
• My Left Foot
• The Ten Commandments
• The Grifters
• The Comancheros
Trailer:


Other releases of My Left Foot: The Story of Christy Brown (1989):

Other releases of The Comancheros (1961):

Other releases of The Magnificent Seven (1960):

Other releases of The Ten Commandments (1956):

Other releases of To Kill a Mockingbird (1962):