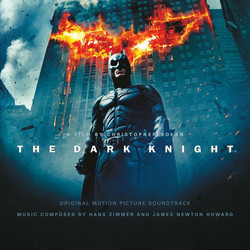 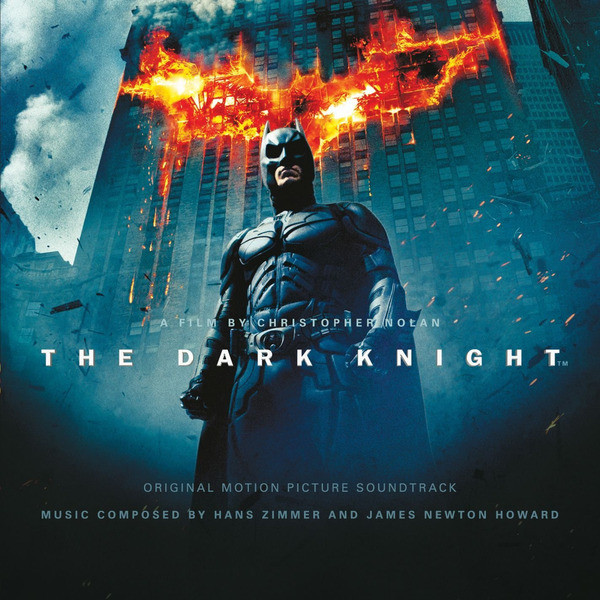 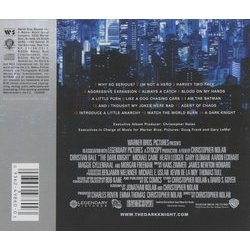 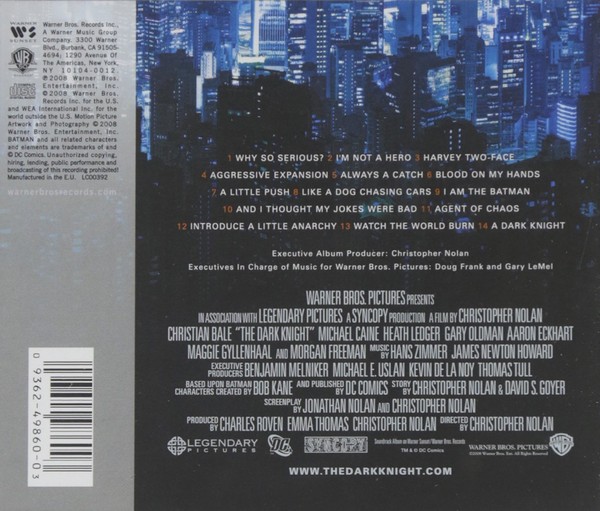 Show reviews in other languages
The Dark Knight - 08/10 - Review of Jason FLZ, submitted at 2010-08-06 21:54:09
Hans Zimmer is a genius. Enough said. Over the years Hans has grown from simply scoring action style movies to scoring nearly every movie of every genre. Be it animated kids films to swash-buckling pirate adventures, to some of the zaniest material ever scored, Hans has certainly created a niche for him among Hollywood's great composers. While not considerably a John Williams type genius, he still manages to create some powerful and inventive music for films. Now, combine that talent with James Newton Howard, a composer with a knack for; majestic, beautiful, mysterious, and genious composer and you'll get the Dark Knight. While I would naturally review scores in paragraph format, I have decided to use a track-by-track analysis of this great music. Here goes.

Why So Serious- The album opens up with this particularly interesting piece. While most music allows you to identify what is being used to create the sounds, this piece is easily confusing. Opening with a minute of wailing guitars and suddenly turning into a heavy metal inspired song. This is easily remeniscent of the Kraken music from the second Pirates score. The second half of the song is mostly vibrations and wails of guitars and who knows what else before finally settling on the more traditional sounds. Easily chaotic but definitely fits the Joker perfectly. 10/10

I'm Not A Hero- This is where JNH comes in. Combining violins, pounding rthyms, and some beautiful orchestrations, this piece is easily a nice follow up to the synthetic feel of the first piece. Better enough, the track continues on with a full orchestral/electronic nod to the music of Batman Begins. 9/10

Harvey Two Face- Easily the most beautiful piece of the score, Harvey Two Face combines brilliant orchestrations that capture the sorrow of the 'White Knight'. JNH writes pretty spectacular music to accompany the feelings portrayed onscreen while Hans Zimmer adds on with his beats. 9/10

Aggressive Expansion- Returning to the Joker medley, Aggressive Expansion cleverly combines the action material from Batman Begins and expands on it with some newer material. As interesting as this works, the track doesn't offer any unique identity beyond what is described. 8/10

Alway's a Catch- Easily the shortest track on the album. Half of it focuses on build-up with wailing guitars while the second half is mostly vibrations and booms that sound nice on a clear audio system but meander. 6/10

Blood On My Hands- JNH really manages to shine with this piece while short, it still has an identity of it's own, reflecting Harvey Dent's music while adding a sweet melody to go along with it. This also reflects some of JNH's more emotional works.10/10

A Little Push- This particular track is definitely effective in most cases. While keeping this same vibration style rthyms as used before, it adds on a brooding melody that reflects the Joker's theme. Unfortunately it still meanders with what can be considered, sounds. 7/10

Like A Dog Chasing Cars- While The Dark Knight's score differes from Batman Begin's in terms of electronic music and guitars, this piece takes the heroic elements from the first film and masterfully combines it with the pounding heavy metal music that defines the Joker. In terms of creativity and engineering, this track feels completely fresh while still giving the impression that it is tying into the newer music for Christopher Nolan's Batman film. 9/10

I Am The Batman- Keeping the brooding aspects of A Little Push, this track takes into account the darker, more horrific aspects of the Dark Knight. Electronic pulsing, brooding themes, and wailing guitars define this track. 8/10

And I Though My Jokes Were Bad- Simply said, this track is an action piece with alot more electronics than orchestrations. Not very exciting beyond the fast paced sound. 7/10

Agent of Chaos- Now here comes the interesting part. Easily the best action track of the whole score, Agent of Chaos is a great combination of electronics, orchestral music, pulsing rthyms, and explosive action. The opening of the track is a combination of a fast paced action score which evolves into a beautiful piano/orchestral medley. As it progresses into a return of the Joker's theme mixed with some more fast paced action. The last third of the track is a quiet and somber medley with a small amount of piano, a nice way to finish the track. 9/10

Introduce A Little Anarchy- Continuing on is a powerful action piece that combines the various theme from this and the previous film and mix them together with pounding electronic rthyms. While a great action piece, it isn't as structured and well designed as Agent of Chaos but still a great piece. 8/10

Watch the World Burn- This track takes a break from the action and decides to go on a more moody yet orchestral route. A nice piece to take a break from the past 12 minutes of action material. Interesting yet a little slow, this can be related to the somber music from the first half of 'Hello Beastie' in the second Pirates film. 8/10

The Dark Knight- The longest track of the whole album. This piece alone sums up everything you have heard prior and yet still remains as an individual. I'll break this track down just to get a better look at it. The opening takes the heroic aspects of the film and has them play out in a brilliant and beautiful violin type score. Imagine if the amazing orchestral aspects of The Da Vinci Code were evolved into a Batman style score and you would get this. A great melody that captures the beauty and tragic of this story. While this starts slowing down, various elements of the theme from this and the previous film merge with Watch the World Burn. This is where the electronic elements tie themselves together with the orchestral brooding melodies. The finale of this track is a final bit of fast paced action mixed together with the rthyms of the score. An impressive and well done track that averages out as a good amount of music. 10/10

Overall, The Dark Knight combines Hans Zimmer's inqenious use of re-inventing the music genre with James Newton Howard's orchestral melodies. The downfall of the album is the use of electronics. While inventive and interesting in the beginning, the sound design later starts dragging on. It becomes somewhat boring. Also, the beauty of the music is overshadowed by the fact that, unless you have already listened to Batman Begins, there really won't be as much incentive to re-experience the score without feeling like there isn't much new in the album with the exception of the pounding electronics. Either way, hoever, this is definitely an ingenious score that in most cases is one of the most creative. Combine this with the fact that the Dark Knight is an amazing movie and you have yourselves a winner.

8/10
The Dark Knight - 10/10 - Review of Sergei Filtero, submitted at 2014-11-29 15:21:13
Zimmer's just a modern day composing icon. This is a constant play for me. Knows how to get the best from an orchestra.
Filmmusicsite.com Awards: Best Original Score (Nominee)
World Soundtrack Awards: Soundtrack Composer of the Year (Nominee)