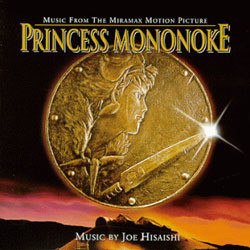 Princess Mononoke - 08/10 - Review of Tom Daish, submitted at 2010-09-15 07:37:13
Despite the consistently good reviews, Japanese animation still hasn't quite hit the mainstream in the west, but Princess Mononoke has come closest to being a hit, receiving a modest theatrical release by Disney (although not wide enough to threaten their own releases, I suspect). Unfortunately, Guernsey's cinema facilities are somewhat on the lame side and so I've not yet seen any of director Hayao Miyazaki's epic animations, but if the artwork on the soundtrack albums is anything to go by, they will be beautiful to watch, if nothing else. The story of Princess Mononoke is a little too complex to summarize easily, but involves warriors, princesses (naturally), mystical beings, gods and the conflict between man and nature. Composer Joe Hisaishi seems to be attracting a cult following for his lush, tuneful and epic scores which, while they don't really break new ground, are the kind of orchestral writing that film music fans love - symphonic writing, brimming with melodies and a good mix of light and dark drama.

The album opens with The Legend of Ashitaka, introducing the main theme, which is surprisingly subdued, certainly there is no heroic histrionics, but a clever mix of introspection with broader, epic strokes as the orchestration is increased. As this isn't the original soundtrack album, each movement covers a particular aspect of the story and so the tracks function much better as independent pieces of music. TA TA RI GAMI (the meaning of which I know not) is ostensibly an action cue, with a startling percussive drive and is a good counterfoil to the lush main theme. There is a (coincidental, I'm sure) similarity to some of the more propulsive portions of James Horner's Krull. Hisaishi seems to like his piano based themes and Mononoke Hime contains a lovely rendition of the main theme, lightly backed by strings. The more mystical aspects receive some of the darkest material, notably Requiem - The Demon Power which is mysterious and drawn out, building to a forceful climax. The Forest of the Deer God is about as close as the score comes to being light hearted, but Hisaishi has amazing control and it never becomes twee or even comic, tempering the light heartedness with mysterious undercurrents.

The World of the Dead reprises the urgency of TA TA RI GAMI, before giving way to the quietly passionate (if pretentiously titled) Adagio of Life & Death. The album closes with the rather sappy Ashitaka and San, a piano led love theme which feels just a touch over romantic compared to the rest, but is a pleasing enough finale. There are several versions of the score, two albums of music from the original sessions (the US release missing a couple of tracks on the Japanese edition), but this album is billed as a Symphonic Suite, arranged and especially re-recorded for CD. The original score albums apparently have slightly disappointing sound quality, plus a slightly disjointed feel due to a very large number of tracks. This particular incarnation therefore seems like a good choice, turning the score into a cohesive tone poem in eight movements, with wonderful playing by the Czech Philharmonic and a warm, detailed acoustic. The music bears favourable comparison with Jerry Goldsmith's Mulan, even if it doesn't have that certain something to make it a classic. However, highly recommended, especially if you like your soundtracks to be orchestral, emotionally direct and memorable.
Princess Mononoke - 06/10 - Review of Andreas Lindahl, submitted at 2008-01-20 21:25:40
I really do not understand what the fuss is all about with these Japanese anime films. I mean, some people really are obsessed with those films. I completely fail to understand what is so great about them. At the same time, many film music fans have been raving about the "absolutely wonderful score to Princess Mononoke", which is one of those films. Once again, I do not get it.

I am not saying that Joe Hisaishi's score is bad, but I do not find it special at all. I do, however, agree that the main theme is absolutely gorgeous. Heard for the first time in the opening cue, "Legend of Ashitaka", this is a wonderful melody, often given a very epic and sweeping treatment. It reminds me of James Horner, in its construction and orchestrations. Simply wonderful.

But the rest of the score fails to impress me. The music is often grand and lush, with distinct Asian influences. So far so good. The only real problem is the action and suspense music, which is far too uninteresting. It does not go anywhere, and does not offer anything interesting, and as it dominates the album, this is of course a pity, and makes it hard to concentrate on the music for a longer time.

But the slow, more romantic music, is wonderful. "Ashitaka and San", for instance, is a lovely piece, performed by piano and orchestra. Other memorable cues are the instrumental version of the "Princess Mononoke Theme Song" and "The Legend of Ashitaka Theme", which is a simply great concert version of the main theme. Clearly Hisaishi's strong side is themes and melodic material, and not actual underscore.
This soundtrack trailer contains music of: