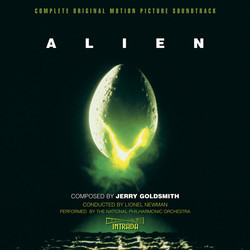 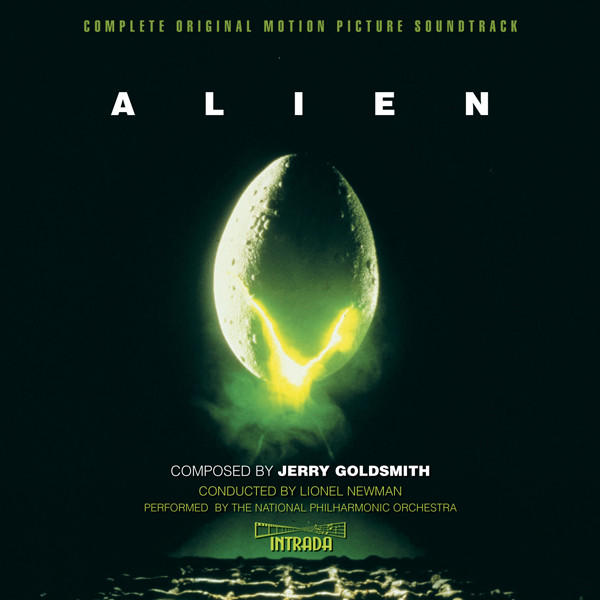 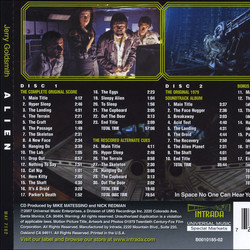 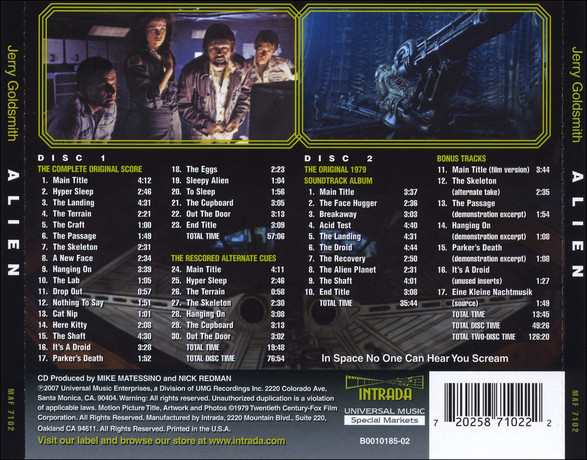 Show reviews in other languages
Alien - 10/10 - Review of Jason FLZ, submitted at 2011-04-15 21:53:18
In 1979 a whole new generation of sci-fi and horror films were redefined by Ridley Scott's thrilling classic; ALIEN. The film was met to strong positiv reviews and became one of the most parodied and inspirational films of the time. Only one thing was missing, Jerry Goldsmith's score. The story behind this was well documented in documentaries (as well as the the liner notes for the score.)
Apparently Goldsmith and Scott were disagreeing over whether the film should contain little to no music. The score written for the film itself was completely butchered, pieces either re-written or replaced by temp music. On top of that, Scott ended up dropping a large portion of the music in exchange for more quiet moments in the film. In 2007 Intrada Records finally delved deep into the story and presented a two part album containing; the complete original score, the rescored alternate cues, the original 1979 album, as well as numerous bonus tracks.

Disk 1 of the album features both the original and rescored cues. Listening to the album is a great example of why Ridley Scott shouldn't have dropped Goldsmith's score. The opening 'Main Title' is orchestrally impressive, starting off with a beautiful yet mysterious trumpet solo and suddenly changing into a darker, repeating two note motif. The theme is reprised in 'Hyper Sleep' and finally expanded into a full orchestra in 'End Title'. Thanks to his skill in the horror genre; Goldsmith also delivers a very creepy soundscape for alot of the score. 'The Passage', 'The Skeleton', 'A New Face', 'The Lab' 'Cat Nip' and so on barely even resemble music, but more intricate sound complete with harsh stingers and eery noises that don't resemble any instrument. Some of the best horror moments, however, are the brassy ones. 'The Shaft', 'It's A Droid', 'Parker's Death', and 'Out the Door' offer orchestrally terrifying music with pounding percussion and a clashing of trumpets and tubas. Overall, it's a shame that Ridley Scott dropped the score the way he did (although the new music holds up very good as well). The music really capture the beauty, mysteriousness, and terror of being alone in space with a deadly creature.

Continuing on from the original score is Goldsmith's revised score. The main title, for example, was changed from the previous orchestral version to a creepier, more ambient theme (the two note motif remains, albeit slightly altered.) The rest of the cues follow suit. Tracks that previously contained thick orchestrations are changed to more ambient style cues with brooding brass motifs and quick flashes of horror. While the music doesn't sound as good as before, the decision was well made. It's alot more effective than before. One good example is 'out the Door'. The cue starts off with explosive brass and changes into a darker variation of Goldsmit's original main theme.

The second disk covers the original 1979 album as well as several excerpts and inserts related to the film. The inclusion of the album istself is a little excessive, as it is just a compilation of what you have heard before but for true soundtrack fans, it's a nice little treat. The bonus tracks themselves are interesting, however. 'Main Title' is a shortened version that appears in the film. 'The Skeleton' is an alternate take on the original cue. The following three cue include demonstration excerpt and give you a listen to original ideas for the cues. They also feature the conductor announcing the track at the beginning of each. 'It's a Droid' also features some unused inserts. The last cue on the album is 'Eine Klein Nachtmusik', a brief excerpt of a classical piece.

So did Goldsmith's music really need to be removed or altered for the film? Yes and no, depending on which side you want to take. The original score is easily one of Goldsmith's best, but Alien also does work better with less orchestration and more ambience. Regarding the album, this has to be one of the most detailed albums that any score collector should own. The liner booklet is so detailed on the music that every little detail about the score still impresses me. Intrada really did a good job putting together this detailed little exploration into Goldsmith's fabled score. A must have for any score lover.
Alien - 10/10 - Review of Tom Daish, submitted at 2010-09-11 09:46:15
Both of the first two Alien films share much in common for both the respective directors and composers. Both were the director's second major feature films, Ridley Scott had previously made The Duellists and Cameron had made Terminator (I think we can discount Piranha 2) and the composers for each had a rough time with their scores. For James Horner it was crushing deadlines and then arbitrary use of his score. For Jerry Goldsmith time wasn't as critical, but Scott replaced bits of it with various music from the temp track, including Goldsmith's own score to Freud and the end title being replaced with an excerpt from Howard Hanson's Romantic Symphony as well as moving cues around. This album represents the music that Goldsmith originally wrote and for the scenes it was originally intended.
The Main and End Titles are the warmest sections of the score. Quite what Goldsmith's purpose in composing a fairly lush opening title was, I'm not entirely sure. I suspect the emphasis on the beauty of the opening shot and to subvert the audience slightly is the most reasonable explanation. The Main Title material is reprised for a fairly optimistic finale in the End Title, which is probably the most recorded cue from the score, despite not really being representative of the music as a whole. As you would imagine, Goldsmith's score is often very chilling and as with most of his horror efforts does not rely on merely screeching synths and strings, but carefully used orchestration and instrumental effects. Goldsmith's solitary trumpet theme from the titles makes a few appearances which actually warm the music up more than might be expected.

While cues such as The Landing have an eerie grace to them, there are plenty where the action and suspense nerves of Goldsmith are sparked. The Droid is a typically spectacular 70's Goldsmith action sequence that doesn't rely on just a repeating device, but throws the orchestra around with sublime results. The end to the cue is somewhat more subdued and prominently features Goldsmith's ticking motif which is a simple, but extremely effective device which is more in evidence in the film than on the album. Goldsmith does well to break the nerves of the listeners with The Alien Planet and The Shaft where his more inventive orchestral effects are used to great effect at musically depicting cold blooded horror.

Although at times this is a very nerve wracking listen, it still doesn't quite compete with the dread inherent in his Omen scores or even the later Alien scores. The main theme is more pleasing than one might expect and certainly quite memorable particularly in its incarnation during the End Title. I wonder whether a lengthier release would ensure the score wielded as much tension as the film does. Having listened to the alternate music track on the DVD, Scott was often wrong to replace some of Goldsmith's music, most notably the pointless replacement of his End Credit music with Howard Hanson's music. However, some of the choices, such as Goldsmith's finally used and incredibly chilling Main Title seem more appropriate and were more justified. However, an iconic Goldsmith score which, in places, manages to evoke more menace than any of today's synth and over-orchestrated horror efforts.
Intrada 2-CD set offers world premiere complete release of Jerry Goldsmith soundtrack to legendary Ridley Scott sci-fi horror movie. Every note of composer's intense, terrifying masterwork appears in dynamic stereo sound from newly-discovered actual 1' multi-track session masters! Generous set has complete score as originally intended, all re-scored sequences & alternates, demo mixes showcasing unusual sounds of serpent, didjeridu, giant conch plus original 1979 LP assembly, also fully remixed, remastered! Deluxe booklet offers definitive behind-the-scenes look at score controversy plus track-by-track analysis with slates, scoring changes, recording dates, more. The final word on ALIEN comes courtesy of Universal Music Group, 20th Century Fox, ace album producers Michael Matessino & Nick Redman plus enthusiastic crew of Intrada. Remember: in space no one can hear you scream! Lionel Newman conducts National Philharmonic Orchestra.
Trailer:

Soundtracks from the collection: Complete Scores/Editions