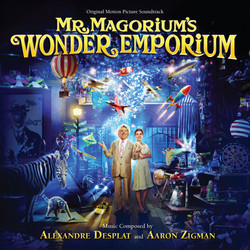 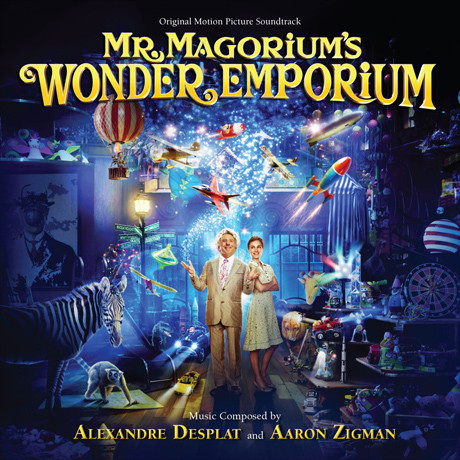 Mr. Magorium's Wonder Emporium - 08/10 - Review of Tom Daish, submitted at 2010-09-08 22:39:32
If you shouldn't judge a book by its cover, then you probably shouldn't judge a film by its trailer, but I have to note that the trailer for Mr Magorium's Wonder Emporium makes the film look irredeemably dire. It's like a cross between Charlie and the Chocolate Factory and Nanny McPhee while on some seriously bad acid and, despite starring Dustin Hoffman (who, I believe, used to be in good films) as the titular shopkeeper, looks like another athletic leap onto the recent fantasy bandwagon. Anything that shamelessly gaudy - the production design looks like Laurence Llewelyn-Bowen exploded - doesn't help. However, there is one redeeming aspect of the production and that is the score composed, perhaps a touch improbably, by Alexandre Desplat and Aaron Zigman. Neither originally conceived as a joint effort nor the result anyone's work being rejected, Desplat simply had scheduling issues and asked Zigman to come in to help finish it off. The album gives no clue as to who did what, which is perhaps a good thing as one doesn't end up trying to compare quality and can live in the naive assumption that they simply wrote everything as a joint effort. So seamless is the tone that it's not a bad illusion to listen under.
Naturally, with any level of involvement from Desplat, it features a great main theme and, shock horror, there is even a proper Main Title to introduce it. Desplat keeps it bouncy, but not self-consciously zany (the use of Danny Elfman's otherwise enjoyable Pee Wee music certainly didn't help the trailer), and can also make it soar, as in The Flight of Magorium which also brings in a gentle, secondary theme on piano. Not perhaps as memorable as the main theme, but still a pleasing counterpart. However, a score like this can't pass without some playful material and there are abundant examples, notably Dodge Ball, Toy Store Jam and both Temper Tantrums. However, both composers write with considerable clarity in terms of orchestration (particularly Desplat, indeed it's practically a trademark) and while there are some nice brass blasts, nothing feels too overegged. Further, there isn't much in the way of tiring Carl Stalling passages; sure, some of the tracks are brief, but within each cue, everything feels carefully crafted and not just 5 second ideas thrown together. There is one curiosity, Triscadecaphobia (fear of the number 13), which bears an uncanny resemblance to the Hospital Chase cue from Leonard Rosenmann's Star Trek IV score. Fortunately, plentiful fun and only a brief distraction.

The gentle material is of predictably high quality, avoiding the mawkishness that such a film could easily inspired. Even cues such as The Funeral, Great Wisdom and Your Friend are superb, with a touch of melancholy, which is a perfect antidote to the jollity elsewhere. The disc concludes with the Flaming Lips' Love The World You Find which, despite having nothing to do with either of the score's composers is actually a decent way to conclude and a good piece of gentle indie rock in its own right. If there have to be some downsides, it perhaps teeters or the repetitive in the second half and culling a couple of tracks of more gentle material would have tightened things up a touch, but that's possibly quibbling. In a blind test, I doubt anyone could hear where Desplat finished and Zigman started; I'd still contend that Desplat is perhaps the finer of the two, but with his great melodies to work with, Zigman clearly had plenty to inspire him to round out the score. Recent times have brought us many great collaborations on kids' movies (notably Messrs Powell and Gregson-Williams) and while this might have been more by accident than design, the results are equally memorable, resulting in a score almost certain to outlive the film for which it was written.
Original Motion Picture Soundtrack
Music Composed by Alexandre Desplat and Aaron Zigman

Also featuring:
'Love The World You Find' by The Flaming Lips

Mr. Magorium's Wonder Emporium is the strangest, most fantastic, most wonderful toy store in the world. In fact, it's a magic toy store and everything in it comes to life — including the store itself. The Emporium only asks one thing of its customers; you must believe it to see it. But when Mr. Magorium, a 243-year-old eccentric (Dustin Hoffman), bequeaths the store to Molly Mahoney (Natalie Portman), the awkward and insecure manager, a dark and ominous change begins to take over the once remarkable Emporium.

The wondrous and magical score is by Alexandre Desplat (The Queen) and Aaron Zigman (The Notebook).

It's truly one of the most enchanting film scores in quite some time.